Singletons love ‘Singles’ for message - not just for g.o.d.

Singletons love ‘Singles’ for message - not just for g.o.d. 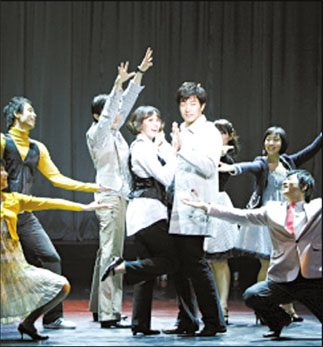 The musical “Singles” is playing at Hoam Art Hall until Feb. 24. Provided by the organizers

Women are packing out the theater for the award-winning musical “Singles.”
The musical ran in Seoul last year, but this run is attracting an even greater number of single women, it seems.
“Musicals usually appeal more to women,” said Choi Bo-Kyu, the show’s producer.
“In 2007, 70,000 people saw the show and 70 to 80 percent were women. This time around, I’d say well over 80 percent in the audience are women.”
Is this because the themes of the show resonate with young women in Korea today?
“That’s part of the reason,” Choi said. But he pointed out the additional appeal: Son Ho-young.”
Son, who plays the Park Soo-heon character, is a former member of the Korean boyband g.o.d. and enjoys a huge female fanbase.
Lee Jong-hyuk, an award-winning movie and theater actor, has pulling power, too.
But the interest lies beyond just the pretty male actors. The plot does echo sentiments felt by Korean women today, Choi said.
Singles is a musical adaptation of the 2003 Korean movie of the same name. It starred Jang Jin-yeung, Eom Jeong-hwa and Lee Bum-soo.
The show is about two unmarried women, facing the big “30.” As Choi pointed out, women tend to fear turning 30 more than men.
Na Nan is one of the two leading characters. She is bubbly and sometimes weird. She got dumped by her boyfriend of three years on her 29th birthday. Her life is transformed when she gets fired from a fashion firm. At a loss, she takes a job as a restaurant manager.
Lee Dong-mi, a Web designer, is sassy and knows what she wants. She quits her job at a successful company and plans to start her own business. But her life changes dramatically after she spends a night with her roommate, Jeong-joon, who is heartbroken over his breakup with his girlfriend, Ji-hae.
Park Soo-heon falls in love with Na. He’s in his mid-30s, and although he’s not especially hot, he’s trendy. He is totally smitten by Na and begins hitting on her .
Kim Ji-woo, a TV and movie actress who has recently been proving her musical talent, plays Na.
Park Hae-na, a relatively unknown musical actress who was cast through an open call that drew 3,000 hopefuls, plays Lee.