Surviving a whiteout in the Himalayas

Surviving a whiteout in the Himalayas

The stark serenity of Mount Lhotse, which at 8,516 meters (27, 940 feet), is the fourth highest peak in the world. All photos by An Sung-sik

INDIA ― They were just 200 meters short of reaching the peak of Darwa Top when the storm hit.
Harsh weather had hampered the climb for the past three days, making a push for the summit a treacherous proposition.
The snow piled up and on Jan. 20 the young climbers were forced to turn back, bitterly disappointed.
Lee Choong-jik, the leader of the 2008 Korean Lhotse Youth Expedition, made the final decision.
But just eight days before, when the team reached first camp at 3,100 meters above sea level, Lee had been brimming with confidence.
“Although there’s a lot of heavy snow blocking the route, this team will succeed by concentrating the passion of the expedition members into one,” Lee said.
But the porters refused to move further on the morning of Jan. 20. The weather was jut too unpredictable, they said.
“Avalanches continued to roll down the mountains,” said Cha Jin-chol, second in command. 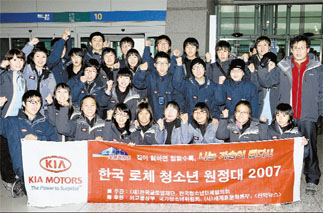 Youngsters from the 2008 Korean Lhotse Youth Expedition team prepare for their trip to the Himalayas at Incheon International Airport on Jan. 8.

After reviewing the worsening conditions, Lee finally said, “Let’s go back.”
They’d tried their best, but the weather gods had raised the stakes too high.
The expedition to Lhotse consisted of 24 climbers aged 15 to 19, plus a doctor and guides.
The team left Incheon International Airport for India on Jan. 7 for the month-long adventure.
The team started the journey in Delhi on Jan. 9. The flew to Rishikesh in the foothills of the Himalayas, then trekked from Uttarkashi at 1,400 meters to Dayara Bugyal, 3,650 meters.
The team is expected to arrive at Incheon today after stopping over in Tokyo.
The expedition was funded by the Korean Global Foundation, The National Council of Youth Organizations in Korea and sponsored by Kia Motors and Berghaus. The first expedition team left for the Himalayas in 2006.
Lhotse is the fourth highest mountain in the world. It’s located close to Mount Everest.
The aim of the mission was to trek to Darwa Top (4,100 meters) and engage in a cultural exchange with local people along the way.
The group planned to sing excerpts from Korean musicals, showcase creative percussion, give a taekwondo demonstration and perform samulnori, traditional Korean music.
Medical services were also offered to locals living in villages along the route.
The team underwent rigorous training last year in preparation for the ascent.
In the five months leading up to their departure for Delhi, they hiked up several mountains in Korea, including Mount Dobong, Mount Bukhan and Mount Seorak.
The selection process for joining the expedition was tough, focusing primarily on health and aptitude. 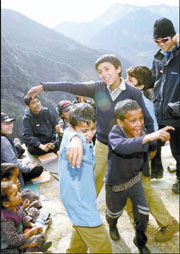 Members of the team teach taekwondo to local children living in villages located along their route to Darwa Top.

Only one applicant in every 100 got the nod.
According to Hong Il-shik, former president of Korea University and co-leader of the expedition, the purpose of the expedition was to help young people to learn by overcoming adversity through cooperation.
“We want to help young people become future leaders who know about sacrifice and helping others,” Hong said.
Baek Seung-hwa,16, certainly learned a valuable and humbling lesson.
“In the face of nature, man is just powerless,” said the Daegu high school student after witnessing an avalanche from a distance.
When Lee gave the call to descend, 200 meters short of the peak, the team responded just as it had been trained. But it was more like an escape than a retreat.
With hailstones the size of small rocks plummeting from the sky, visibility dropped to a few meters. 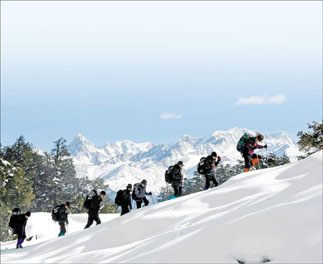 The snowstorm enveloped the team and it became increasingly difficult to distinguish the mountainside from the sky.
The climbers were in a whiteout.
But they had planned well. Using ropes and marker flags they had dug deep into the icy ground, they managed to navigate their way back to safety.
“I was better off than the porters,” said Lee Hyeon-ji, 16 from Gapyeong, when she was safely back. “They had to carry all the gear and their footwear wasn’t as good as ours.”
But despite her professional boots, she endured severe blisters and had trouble walking the last stages.
At 3,000 meters, expedition leader Lee forced his team to swallow their frozen rations. “To live, we must eat,” Lee shouted above the howling wind.
The team continued in the dark. The snow had turned to sleet, leaving the climbers soaked. Thunder and lightning shook the mountain and everyone was exhausted.
“Although it was really tough, we were there for each other when it mattered most,” said Kim Dong-min, 16, from Seongnam.
The young members said they learned many things on the mountain, but one lesson stood out: They were responsible for themselves and for each other, and a spirit of cooperation was vital for survival.

After 10 hours and 22 kilometers, the dim lights of a village flickered in the distance. They were safe and had succeeded, even though they had not reached the summit of Darwa Top.
“Getting everyone back home safely ― that was a more valuable experience, rather than reaching the top,” Kim Dong-min said.