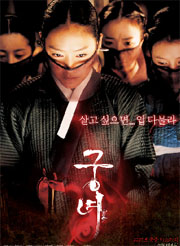 “Shadows in the Palace (Goongnyeo)” is a movie with an identity crisis.
It had the potential to weave in the flavor of “CSI” with the intriguing inner workings of a Joseon Dynasty palace.
The backstabbing, the petty fighting, the balance of power between the various concubines: That’s what I imagined when I read the storyline.
Unfortunately, the end result was a lot of wasted potential.
The intrigue begins when Cheon Ryeong (Park Jin-hee), the medic for the court ladies, discovers Wol Ryeong, a fellow court lady, or goongyeo, dead.
While performing an autopsy on Wol, Cheon finds evidence of foul play. But higher court ladies, who fear that the murder will sway the king’s affections for them, order Cheon to ignore her suspicions.
Intended to be a mystery thriller , the movie has aspects of horror that come into play out of nowhere about midway through. This just made me scratch my head. The movie tries to do too many things here and there and ends up weak overall.
Director Kim Mi-jeong, who studied under director Lee Jun-Ik, does a great job of bringing out fine characters. Park as Cheon does her job, and so do the other actors.
But like a flower that shrivels when it’s just on the verge of blossoming, Shadows in the Palace fails to connect the dots. It’s an attempt to explore an interesting genre that the Korean movie industry has not touched upon much.
Eyebrows may be raised, but heads certainly won’t turn.