[Review]Handball is a hit for a brief ‘Moment’

[Review]Handball is a hit for a brief ‘Moment’ 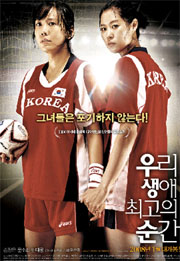 There is no Rambo. There is no Conan the Barbarian. And there certainly isn’t a Mad Max. Yet any fan of any genre is going to like “Forever the Moment.”
Based on a true story, the movie is essentially a feel-good story about a bunch of female handball players. Despite poor conditions and an uncertain future, they manage to clinch the silver medal at the 2004 Athens Summer Olympics.
Director Lim Son-rye took a gamble when she opted to shift into the sports genre, which almost never succeeds at the box office here. Sports movies are generally one territory that the Korean movie industry has shied away from, except for recent flicks such as “Mr. Gam’s Victory” (2004), which met moderate success.
Add to the risk factor the fact that the audience already knows the ending of the movie, and Forever the Moment seems doomed from the start. But Lim conveys the story in such a way that the audience can immediately identify with the movie.
The game scenes look remarkably real to the untrained eye, thanks to the actresses’ in-depth training and Lim’s direction.
A three-month crash course did the trick, transforming actresses who are usually known for their slim physique. Here, the women hit high jump shots and re-enact the typical rough play that goes on at the goalpost in a handball match. Realistic game scenes are especially important in sports movies.
The acting, to be sure, is average. But this is forgiveable because of the real-life impact of the story. Lim weaves the components of the film to stir the heart. We can identify with what the players go through: job insecurity, mounting debt, family problems. There’s something for everyone.
Despite their struggles, the team’s run in the Olympics is like a treasure box that is opened for the audience’s benefit.
The movie doesn’t just hint at our memories of the past. As the credits roll, so does a real interview with Im Yong-cheol, who was head coach of the team. The interview takes place right after the final games at the Olympics and reminds us of the sad reality of a sport that rarely makes the spotlight.
Being a champion in a sport like handball or curling, for example, can often be unrewarding. Like the heroines of Forever the Moment, these athletes end up with laurels, but little fame or wealth.
The strict translation of the title is “The Greatest Moment in our Lives.” It’s a story to share ― and it appears the word is out.
As of Monday, the movie had drawn 1.7 million viewers in 11 days. Even a die-hard action fan like me has to admit Forever the Moment is a pleasant ride. Sometimes sports stories from real life, such as “Hoosiers” and “Rudy,” make great movie material.