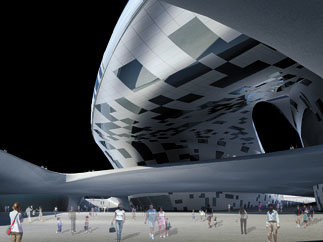 A young woman at the top of the steps leading down to the subway is noisily hawking bamboo rice strainers for 1,000 won each.
A few steps away, a homeless man lies shivering on the concrete sidewalk, begging for spare change.
It’s early morning at Dongdaemun Stadium Station, a central junction of three subway lines, making it one of Seoul’s busiest subway stations.
Dongdaemun is a gritty neighborhood, famous for its extensive flea market and the baseball and football stadiums that were built there in 1925.
The baseball stadium was a mecca for high school baseball during the 1960s and 1970s. But life here is undergoing a major transformation. 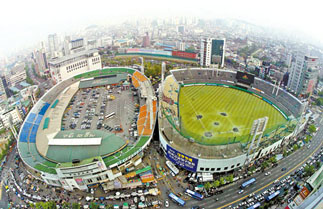 Dongdaemun Baseball and Soccer Stadium (right), a historic landmark for Korean sports and political gatherings, will be completely demolished by March 2008.

As you exit the subway station you can’t fail to miss the glossy posters of a giant park and fashion complex. Dongdaemun is earmarked for redevelopment and the bulldozers have already razed part of the stadium, fueling anger among civic groups.
Seoul Mayor Oh Se-hoon announced plans to build a “World Design Park” as part of his campaign manifesto in the 2006 elections.
The park will house a state-of-the-art convention center, galleries and an underground mall. 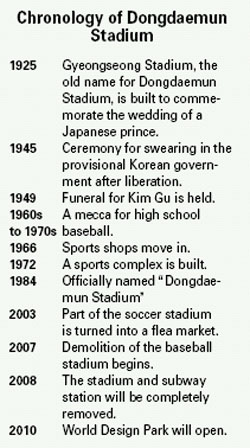 The development is part of Oh’s ambitious scheme to transform Seoul into a global design capital to rival major cosmopolitan cities like Paris and Milan.
Last spring, the Seoul city government called for an international architecture competition.
Zaha Hadid, a renowned British architect and the 2004 recipient of the Pritzker Prize ― the architectural equivalent of a Nobel Prize ― won the competition with her project “Metronymic Landscape.”
But dissenters have now raised their voices.
Local historians and architecture critics are upset at the decision to raze the historic stadium, especially as taxpayers’ money is involved.
In addition, they say Hadid’s design, which is expected to cost 340 billion won ($358.7 million), fails to reflect the location’s history, which is a living witness to Korean sports and political gatherings.

The funeral of Kim Gu, an independence activist under the Japanese regime who was assassinated in 1949, was held here, for example.
Over the years, the area surrounding the baseball stadium developed into a large factory complex for Korean garment workers.
Dongdaemun Market is one of the largest shopping districts in Seoul, popular with tourists and Koreans looking for cheap goods.
But more importantly, experts argue that Hadid’s futuristic model, a fluid structure covered in titanium, will jar with the existing historical buildings in the area.
Remnants of Seoul Fortress, which was partially destroyed by the Japanese in 1925, run through the area and a highly visible landmark is Dongdaemun itself, the eastern gate into old Seoul.
Mayor Oh stated as one of his campaign pledges in 2006 that the primary objective of the redevelopment package would be the restoration of sections of the fortress wall.
But critics are unconvinced that the new designs are right for the area.
“You don’t get a sense from the proposed plans that Hadid really understands the context of our city, its history and memories,” says Lee Joo-yeon, an architecture critic.

Lee blames the metropolitan government for failing to ensure communication between the designer and local civic groups.
“The stadium borders a fortress wall and a historic gate. Both are national treasures in Korea. They should have made that clear in their guidelines. The way it feels now is that they tossed the assignment to a jury and let the architects interpret the space in their own way,” Lee says.
Experts say the city government should have preserved partial elements of the stadium.
The stand or the scoreboard could have been conserved as a memorial to local sports history, they say.
“If they really wanted to, there were many options for preserving parts of the area. It’s an architect’s job to solve these issues,” says Yun In-seok, an architecture professor at Sungkyunkwan University and the director of Docomomo Korea
Docomomo is an international organization that pressures local authorities to conserve heritage buildings and sites in major developments.
“It’s the same with numerous other heritage buildings that have been demolished in Korea. There is always a way to integrate the old and new, but they just don’t have the mindset to see it as our cultural heritage,” Yun says.
The Dongdaemun story is just one example of the destruction of historical landmarks in Seoul.
The city government has announced plans to demolish most of the old City Hall building in downtown Seoul, except the main edifice.
Scheduled for completion by the end of 2008, a new 22-story complex will house the main offices of the city government.
In 1993, former Korean President Kim Young-sam ordered the demolition of the old Japanese colonial headquarters inside Gyeongbok Palace.
The building was a reminder of Korea’s shameful history, went the argument.
“Not once in Korean history did the government ever appoint someone with architectural insight as the Minister of Construction and Transportation,” says Lee Yong-jae, an architecture critic.
“They were either from the military or were full-time politicians. We never had a politician who truly valued architecture as our historical heritage. Redevelopment was always about their political agenda and a tool for economic prosperity,” Lee adds.
The controversy surrounding Hadid’s design has hit another nerve.
Korean critics are unhappy that the government has commissioned celebrity artists and architects from overseas to design major public landmarks in Korea.
They say Korea has made enough mistakes in the past by hiring well-known artists to produce valuable work at high cost in the wrong places.
An example is “Spring,” the bright red and blue shell-like sculpture at the head of Cheonggye Stream, the restored waterway in downtown Seoul.
Local critics condemned the 3.4 billion won ($3.3 million) structure, the handiwork of the American pop artist Claes Oldenburg and his wife Coosje van Bruggen, when it was installed in 2006.

Critics say star artists like Oldenburg have not made enough effort to understand local history when commissioned to take on major projects in Korea.
Oldenburg and van Bruggen didn’t visit Cheonggye Stream before they installed Spring, and neither Hadid nor Jean Nouvel, a celebrity architect commissioned to design a new opera house in Seoul, came here before they submitted their designs.
Hadid dispatched members of her team for a field investigation, and she sent Patrick Schuhmacher, the principal partner in her firm, for a final presentation in August.
But she is scheduled to fly here in March when the city plans to embark on the renovation.
“Architecture is not some chunk of sculpture,” says Lee, the critic. “You can’t design a place without visually understanding the site. One architect I know from this competition rented a motel room near the stadium for five months. He talked to merchants and studied the area closely. He lost the competition because his idea wasn’t simple enough. If you know the full story, you lose because you can’t provide a simple vision.”
Others say Seoul is pushing too hard to reshape its global image.
That’s why the architecture competition in August, which commissioned eight architects, four Koreans and four non-Koreans, was held in English.
“We were specifically asked to give a 30-minute presentation in English in front of a jury,” says one competitor about the handling of the competition. “Why couldn’t they hire an interpreter?”
Jo Cheol-hyeon, the owner of a sports shop that has been in business in Dongdaemum for 30 years, has gotten a similar impression from Seoul officials.
He is also upset that the city government began demolishing the stadium and hasn’t offered him a place to move yet.
“When we asked city officials whether we could move into the underground annex of the new complex, they told us that we don’t fit into their concept,” Jo says. “We started from scratch and made this place the country’s sports mecca, and this is all we get?”
In “Space Politics,” Kim Jin-ae, an urban planner and the director of the Presidential Committee on Architectural Culture and Construction Technology, blames Oh’s administration for following the current “luxury craze” in contemporary public architecture.

Kim, who was among the “Millennium Global Leader 100” published by Time Magazine in 1994, says in her book that Oh’s scheme to turn Seoul into a design capital is bold but his idea of “design” is too wasteful and shallow.
“The winning entry [by Hadid] is a visual artwork, but it does not convey the life of the stadium,” she writes. “That makes us bleak and pathetic.”
But the city government appears to have focused more on a strong design than civic identity and the restoration of the fortress.
“The brief of the competition was clear,” says Diana Balmori, one of six jurors at the competition and a landscape scholar from New York.
“The intention was to move Korea to the first rank of industrial design and this design center is one of the important pieces in that aim. Given the brief, Zaha Hadid’s entry was clearly responding to the image. If the intent is to have a strong image for a design center, it would have been better to put it on a site that is not encumbered with a baseball field,” Balmori says.
The shopowners around the stadium are still negotiating with the city government.
So far, they have settled on building a separate complex in a neighboring district for vendors from the stadium’s flea market who were pushed out of the Cheonggye Stream area in 2004.
“I lose my sense of place every time I walk out of this subway station,” says Kim Ui-tae, the owner of the area’s Samsung Sports, referring to Hadid’s designs posted on the walls of Dongdaemun Stadium Station.
A slogan on one of the posters reads, “Architecture Beyond Imagination.”
“There’s nothing in the picture that tells you that you’re in Seoul. Everyone is Caucasian. It’s good that the development will attract a lot of foreigners into town, but we live here, too,” Kim adds.