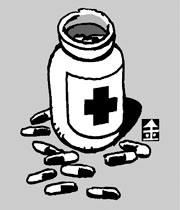 Thalidomide, which caused horrific birth defects in children whose mothers took the drug in the 1960s, seemed likely to disappear permanently due to its catastrophic side effects. However, it has returned from the grave. Recently a medical journal in New England published an article saying that thalidomide can effectively treat chronic lymphocytic leukemia. Medicine can be poison, and poison can be medicine.
Thalidomide was first sold in Germany in 1958, initially as a sedative. Soon, however, it was sold as an antiemetic for pregnant women to relieve morning sickness. Until 1961 pregnant women in 48 countries had taken this medicine. But two to three out of every 10 children of women who took the pill early in pregnancy were born with severe defects, including missing limbs. These “Thalidomide babies” numbered about 10,000.
The front page headline of the Washington Post on July 15, 1962 read: “‘Heroine’ of FDA Keeps Bad Drug Off of Market.” A young doctor named Francis Kelsey, who had been hired by the FDA just two years earlier, did not approve thalidomide for sale in the U.S. due to lack of sufficient documentation. As a result, the U.S. suffered very few cases from the drug, and the FDA was praised worldwide.
The frequency of side effects is higher than people usually believe. In 1998, A shocking article in the Journal of the American Medical Association, “Frequency of drug side effects in admitted patients,” documented over 30 years of cases in U.S. hospitals and concluded that 2.2 million people are admitted to hospital due to side effects on average per year, and 100,000 of them die.
Dr. Ray Strand, the author of the book “Death by Prescription,” says adverse drug effects are the third highest cause of death in the United States, next to heart disease and cancer. Strand says in his disturbing book that the number of deaths per year by prescription is higher than the number of American soldiers killed in the Vietnam War, which was more than 50,000.
Medicine and toxins are two sides of a coin. Something that is medically effective is also toxic. But Koreans are often blind to the potential toxic effects of a drug, although they are attentive to medical wonders.
The FDA advised the public on Jan. 17 not to give cold medicine to children under the age of two. The agency said a lethal side effect may occur. However, in Korea, there is no public debate about such things. Our country seems to be in another world that is not attune to potentially of lethal side effects.

The writer is a reporter for the JoongAng Ilbo specializing in food and medicine.