Cultural oases in the concrete jungle

Cultural oases in the concrete jungle 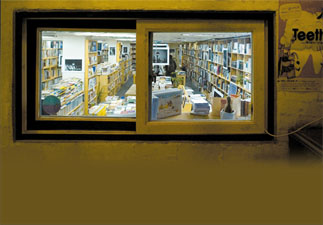 Though cities may make people more superficial, they can also foster growth and communication, according to Ralph Waldo Emerson, the American essayist.
Seoul is no exception.
Seoulites are constantly looking for something new and exciting in their lives.
Korean TV actor Yoo In-chon, 57, also a professor of theater at Chung-Ang University, recently shared some of his favorite cultural spots in Seoul that allow him to overcome the city’s desolate concrete jungle.
He goes to performance centers and galleries around the clock, but he considers that to be work.
But off the clock, Yoo finds an oasis when he visits the back streets of Cheonggy Stream. He loves the traditional restaurants near the stream. His favorites are the gopchang (broiled cow intestine) alley in Hwanghak-dong, the samgyeopsal (pork barbecue) street near Nagwon Arcade and gomtang (thick beef soup served with rice) restaurants in Euljiro.
The places he recommends evoke nostalgia and sentiment that is hard to find in other parts of the city.
For Yoo, enjoying a city means eating. For others, it may be hidden cultural grounds, like Pungwoldang in southern Seoul, Eum Art in Daehangno, central Seoul or Igong near Hongdae.
Each of these places has a different cultural theme. Pungwoldang is a classical music store.
Eum Art is a bookstore that hosts contemporary writers. Igong is a movie theater that screens documentaries.


Some might call it superficial sophistication, but there is a certain glitz and glamour on Apgujeong Rodeo Street in southern Seoul.
This upscale neighborhood where people look good 24/7 features a California Fitness Center franchise, where young healthy bodies like to work out and be seen.
You can also find the Designer’s Club building with fashion outfits and places that offer plastic surgery and dermatologists. Boutiques abound.
But amid all this hustle to be hip is a signboard that reads “Pungwoldang” in dark violet letters.
Here is a place that bucks the modern trend.
Located on the fourth floor of the Seongsan building, the light inside Pungwoldang is dim. Classic music flows delicately through the air. There are stacks of albums and DVDs.
In this atmosphere an amiable voice offers a customer coffee. She is one of six staff members working at the store.
Pungwoldang, the classical music store, will celebrate its five-year anniversary this June.
It is the only classical music store in Korea.
Now only a fourth the size (2,045 square feet) of its original space, the store now has more room due to a renovation last year.
Though the store only sells classical albums, customers are not obliged to purchase anything.
There are tables and chairs for customers to enjoy while sipping tea or coffee. There are also music and lecture halls with screens and audiovisual programs.
Last year, Pungwoldang hosted a full-length commentary session on the 22 operas of Mozart.
This year, the store is running lectures on classical music, including Italian opera and the composer Franz Schubert.
The owner of the store is Park Jong-ho, 48.
He guarantees the quality of the lectures. Over the years, Park has been constantly working to provide an exclusive cultural area for classical music lovers.
A firsthand visit is required to truly get a feel for the place.
“You just have to visit Pungwoldang to appreciate classical music,” Park said.
Park traveled an interesting road to his position. Formerly a psychiatrist, he closed his practice five years ago because of his love for music. The move generated gossip in Seoul.
For Park, it’s not about the money. He didn’t open Pungwoldang for commercial reasons.
In fact, he said he has little money remaining after paying the rent and his staff salaries.
In recounting his career change, Park said his favorite leisure activity was listening to opera. But as a psychiatrist he couldn’t find much information or music related to the genre. So he wanted to provide a gateway for fellow music lovers looking for rare albums that are hard to purchase in Korea.
“You can say that most albums are first imported to Pungwoldang,” Park said.
He said his store may even contain albums that can’t be found at Kyobo Book Center, Korea’s largest bookstore.
From time to time, guests come to the store. For example, violist Richard O’Neill and pianists Lang Lang and Baek Geon-woo have meet their fans at Pungwoldang.
“The staff at Pungwoldang are almost like curators in a museum,” Park said. “They recommend suitable classic works to visitors.”
The staff also sends music news to some 10,000 Pungwoldang members twice a month by e-mail.
Park believes that culture is not limited to high-brow society, whatever that means.
“No all popular cultures that exist a long time become classic,” Park said. “There are reasons why Western classical music survived for so long ― it lifts and heals the soul,” Park said. “There should be more opportunities for people to spontaneously open their hearts and get closer to classical music.”


The clear, ringing recorded voice grabs your attention as you enter Eum Art, a bookstore in Daehangno.
It belongs to Kim Kwang-seok, a singer who passed away 12 years ago.
“To him who has nothing, songs and poems are merely a form of a heartbreak,” Kim’s recorded voice says. “Amid the dark, a small chant or recital is a great light.”
The voice grows even more audible in the bookstore, which contains some 40 black-and-white photographs of Kim taken by well-known photographer Lim Jong-jin. In one photo Kim holds a guitar, looking slightly lonely and shy.
The artwork of Kim and Lim will be exhibited until Feb. 9 at Eum Art, a bookstore featuring a collection of liberal art, fine art and educational books. It may be a surprise to the public that these are the only book genres the store sells. That is because liberal science books aren’t selling well at the moment.
But Eum Art is faithful to Daehangno, considered a mecca for the performance arts - It has many books related to performances and photographs.
On the left side of the store are used books on social studies and history that were once popular during the 1980s. There are also round tables and chairs to create a restful atmosphere.
One of the main features that the bookstore boasts is its activities and programs.
Last year, Eum Art held performances every third Saturday, including a play entitled, “What Happened to All the Books?” Dream Play, a theatrical company directed by Kim Jae-yeop, organized the play. The story depicted the tough environment that liberal and social arts books face today.
Kim said that he chose to stage the play at the bookstore to support Eum Art.
The bookstore isn’t a gallery, but it is the site of both small and large performances and fan meetings as well.
Through literary sessions like “Conversations with the Writer,” readers can meet contemporary Korean writers, including Cho Byung-jun, Kang Young-sook, Pyun Hye-young and Shin Hyun-rim. Plays and dramas are also performed.
With all of these activities, Eum Art has earned its spot as a cultural oasis in Seoul.
Han Sang-jun, 46, is the owner of the bookstore. He opened it in October 2005. He quit his office job before opening Eum Art because of his passion for books, especially books that led to self-examination and discovery.
He wanted to share that joy with a wider audience, and Eum Art is the result of his passion.
“Many people communicate and build human networks in the store,” Han said proudly.
His hope is that Eum Art will become a benchmark bookstore like Ilseongdang in Tokyo, Japan, a bookstore boasting 100- years of tradition.
“Three generations have owned it to this day,” Han said. He hopes to see Eum Art last a long time, too.


Igong is a visual arts center near Hongdae known for its presentations that buck the norm.
At the center visitors can view documentaries, watch exhibitions and hear lectures. It often introduces nonmainstream culture, such as documentaries, videos and arts made by feminists and minorities.
Kim Yeon-ho, 34, owns the center.
He said Igong helps bring out perspectives that mainstream films don’t emphasize.
“Media shouldn’t be accepted passively but instead should be used as a creative tool,” Kim said.
Kim is a member of the Video Artist Association, founded in 1999.
He developed the committee and opened Igong in 2002.
The center seeks to combine amusement, activities and arts. So far, it has introduced some 1,000 videos.
Every year at the Seoul New Media Festival, Igong introduces documentaries that break down people’s conceptions and walls.
“It is to introduce unfamiliar yet important work,” Kim said.
The center’s goal is to break away from traditional media boundaries and make film and art personal.
For example, the center has been introducing a steady stream of feminist artists, including French Chantal Akerman and American Barbara Hammer, publisher of the documentary “My Name is Vietnam.”