The weather is frigid as I step outside the Jegi-dong subway station. But the cold doesn’t appear to deter people from visiting Kyungdong street market in Dongdaemun District, central Seoul.
Today, the 48-year-old market is even more packed than usual. It’s no wonder ― the Lunar New Year is coming. The shorter days mean there’s less time to shop, meaning a higher concentration of people during daylight hours.
As I jockey for space in a sea of people drifting through the market stalls, I feel like I’ve time-warped into a scene straight from the Korean War era.
Back then, farmers from northern Gyeonggi and Gangwon provinces swarmed around Cheongnyangni Station and the former Seongdong Station, now a shopping center, to sell farm and forest products.
Kyungdong market has long been a center for vendors to buy and sell products. In 1960, the area grew as large as the Noryangjin Fish Market and Garak Market, two prominent markets in Seoul.
But Kyungdong market is different from Seoul’s other street markets; it is the city’s cheapest and boasts an astonishing variety of goods.
As I weave my way around thousands of stands, stalls and shops, I spot everything from dry goods to heaped bowls of bbeondegi, or roasted silkworm larvae.
But even more intriguing are the stalls of medicinal ingredients. Roasted bugs are nothing compared to live reptiles, fungi the size of my head, snake-headed fish and even dog meat. 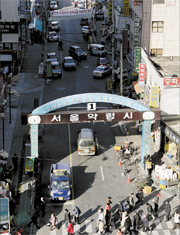 The regulars at Kyungdong market, however, don’t bat an eye. With my curiosity piqued, I head back toward the station to visit Seoul Yangnyeongsi, a traditional Korean medicine market.
Here, the musty scent of boiled herbs wafts from some 800 Oriental medicine dispensaries.
Seoul Yangnyeongsi was born during King Hyojong’s reign in the Joseon Dynasty (1392-1910).
The site, before receiving its official name of Yangnyeongsi, has roots in Bojaewon, an agency that used to provide health care for the poor during the Joseon Dynasty.
Medical officers like Heo Jun and Lee Jae-ma treated patients using herbal medicine.
As officially recorded in a history book dating to King Sejong’s reign, Bojaewon was created to provide relief to the destitute.
Naturally, many medicine and herb dealers came in and out of the Bojaewon area, outside Dongdaemun. People harvested ingredients from nature and sold them in markets in Seoul. The area was easily accessible to dealers because it was located on the way to the city center.
Today’s Anam-dong Rotary, which is near Yangnyeongsi, is the former site of Bojaewon. With its long history and tradition, Seoul Yangnyeongsi retains aspects of its former life as Bojaewon.
Located on the main northeastern road leading into Seoul, Bojaewon used to house Oriental medicine clinics.
There were also doctors and nurses here from the reign of Taejong, the third king of the Joseon Dynasty, to that of King Seongjong, the ninth.
And for the homeless, an inn provided accommodation ― as well as funeral services.
Vendors still bring herbal ingredients to the market straight from the mountains, which keeps prices cheap.
There are 324 Oriental medicine clinics, 312 Oriental pharmacies, 57 private-enterprise herb wholesalers and 99 herb-exporting enterprises that call Jegi-dong and Yongdu-dong home.
During the early 1960s, there were only about 20 such stores here.
Despite the number of herbal medicine outlets, it’s hard to believe that the herb district’s empty streets thrived in the past, especially compared to the lively streets of Kyungdong market. 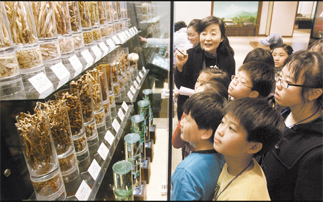 I stop at one of the numerous herb stores, where I meet Lee Jae-hwan, an Oriental medicine doctor. He tells me that throughout the 30 years that he’s run his shop, he’s witnessed the area’s struggle.
“I only sell one packet [of herbs] a day, and I break even after I buy a meal,” he says, adding that foreign tourists come by but rarely buy anything.
“There are more stores than there are customers,” Lee says with a sigh. “It’s become a poor business. And now there’s the economic recession.”
But surely, I thought, business can’t be that bad. After all, just across from the street-side herbal clinics, there are two tall buildings that house modern herbal clinics ― or so I thought.
As glitzy as the Donguibogam and Bullojangsaen towers are, the modern herbal clinics they house are losing the struggle for survival. “Donguibogam” is the classic text of Oriental medicine, and bullojangsaeng means perennial youth and long life.
In fact, Lee tells me, although Donguibogam Tower was built only two years ago, it closed down this year.
“Oriental herbal medicine is losing its energy and spirit,” he says. In the past, the elderly regularly visited the herbal stores to maintain good health. There, they learned about the benefits of traditional Korean medicine.
“But most have passed away. Modern people don’t know the efficacy of herbal medicine. They don’t look for herbs,” Lee says, his voice trailing off.
The doctor anticipates that despite the meaning of its name, the days of Bullojangsaeng Tower are numbered.
Soon, he says, he’s going to quit his practice and find another job.
Other Yangnyeongsi areas suffer from the same sense of futility.
But there have been movements to revive the medicinal herb street in Seoul.
One such effort has been the Oriental Medicine Culture Festival, held every spring and fall. Herbal doctors hold demonstrations on how to prepare herbs, contests, a health expo, displays of top-quality medicinal herbs and tastings of medicinal drinks and tea.
In addition, the Seoul City Drug Market Society and Dongdaemun District Office founded the Seoul Yangnyeongsi Herb Medicine Museum in 2006. It is located on the second floor of the Donguibogam Building, and I head up to check it out.
There, I encounter Chai Hei-teack, the director of the museum. “We began plans to establish the museum 10 years ago,” he says. In hopes of preserving and developing historic Bojaewon, the museum was built with a 6.5 million won ($6,825) endowment. 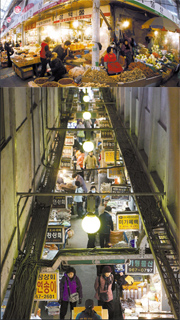 The museum receives 200 to 300 visitors per day, Chai says. A miniature replica of Bojaewon, the medical center during the Joseon Dynasty, attracts visitors as they enter.
Inside are 500 types of medicinal herbs and 400 artifacts related to Oriental medicine. Exhibits provide information on famous Oriental medicine doctors from history, including Heo Jun and Lee Jae-ma, as well as displays of ancient Oriental medical texts from different historical periods.
Other displays share information on basic Oriental medicine, tools for gathering herbs, measuring instruments, herb grinders, drug-making tools and medicine vessels.
Professional guides from the Dongdaemun District Office guide visitors through the museum.
“Oriental medicine views the human body as an integrated organic whole,” a museum guide explains. “Ailments are identified by determining what is wrong throughout the entire body.” 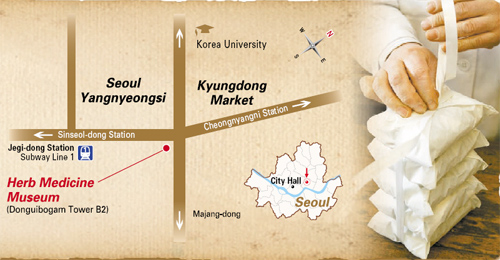 For example, in Korean medicine, he says, a backache indicates problems in other parts of the body as well. A full-body physical and psychological examination helps doctors identify the root of an ailment. Then herbal medicine cures by correcting abnormalities.
“Oriental medicine has a unique way of understanding a disease,” Chai says.
But students today no longer care to learn about herbal medicine, Chai says. To them, science means only Western medicine.
Nevertheless, the museum is one of Yangnyeongsi’s last hopes.
Only time can tell whether it can revitalize the local economy, attract tourists and inform others about traditional herbal medicine. estyle@joongang.co.kr