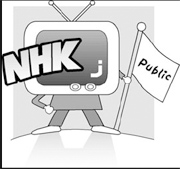 On Dec. 31, 2006, NHK, the government-run television station in Japan, got turned upside down. During its famous New Year’s Eve Special, female dancers got topless during their performance. Angry viewers protested and the station got deluged with more than 1,000 phone calls. In truth, the dancers were wearing skin-colored “bodysuits,” but didn’t tell the station. They apologized, but NHK did not accept it. The reason was that they’d already upset the viewers, and that could not be taken back.
Although the dance group had been at the top, they were not allowed on any NHK programs the next year.
That incident was the only time in the past 10 years an NHK program has been involved in nudity or obscenity. Although NHK is being shaken again due to insider trading these days, the allegations have had no effect on its fairness or role as a public institution, which is the key to a public broadcasting station’s credibility.
That is why there are no commercials on NHK.
Before any program airs on NHK, it gets strictly reviewed in several stages. Not only the language, but the direction of the production, gets closely reviewed. A script for a program such as a New Year’s Eve Special is thicker than a phonebook. Announcers at private broadcasting stations show avant-garde performances by entertainers, but if NHK announcers did that, they would be fired instantly. NHK is excessively fond of its public role and quality as a government station. That is how programs such as “Project X,” which are about ordinary people who have explored new fields, and the space series “Journey of the Unknown” were born.
President-elect Lee Myung-bak raised an objection to a KBS-2 television station program that he saw because it showed housewives having extramarital affairs on TV dramas.
KBS calls its station 2 a “sound cultural channel for homes.” The issue did not just emerge just today or yesterday.
It is time to make a fundamental change.
Collecting fees from the audiences of television programs, while airing TV commercials and producing low-quality programs does not make sense for a public station.
On its Web site, KBS boasts “it has been recognized as the medium with the largest influence in Korea for the past six years, since 2002.” It is simply shameful to read that boast. NHK’s publicity catchphrase, “NHK has always been, and always will be, a public broadcasting service,” seems far better.