An outdoor wedding is just one option open to adventurous couples willing to break away from the rigid conformity of Korean-style weddings. Provided by Art Bridal

Cho Young-il, 27, had a lingering regret about the way he proposed to his fiancee, Kim Su-jung, 27. He felt it wasn’t romantic or special enough.
So during their wedding ceremony in Chungjeongno, central Seoul, last Sunday, Cho sang a love song in front of around 200 guests and reenacted a scene from the 2003 movie “Love Actually.” Cho stood before his bride and turned the pages of his sketchbook to deliver his message of everlasting love. After that he knelt and slipped a ring on her finger.
That was just one of the quirks.
The couple also dispensed with the traditional wedding march as the bride entered the venue.
“So many weddings are predictable and boring. We wanted to make ours more interesting and special,” said Cho, an employee of Seoul-based Shinhan BNP Paribas Investment Trust Management.
A growing number of young Koreans are trying to add their own flavor to standard weddings that, critics say, are far from celebratory.
Standard weddings in Korea are compact Western-style affairs at commercial wedding halls. They are often criticized for being too formal, noisy and expensive.
But, most of all, weddings here are greatly influenced by Confucianism. This means they are usually geared toward pleasing the parents and relatives first, and the couple, second.
Kwak Hyun-chul, a consultant for wedding planners Beautiful Wedding, the company that handled the Cho-Kim nuptials, says he has been flooded with requests for more creative weddings over the past two years.
“From singing and dancing, to a taekwondo demonstration and even a tennis match, people want to try anything they can imagine,” Kwak said.
Wedding consultants say changes sometimes mean unusual venues. Instead of typical wedding halls, some brides and grooms opt for parks, private homes, restaurants and even on river cruisers along the Han River.
According to Art Bridal, another wedding service provider, the demand for unconventional settings is rising threefold every year. “Many couples choose special types of weddings because they think they will be more fun, cozy and flexible,” said Choi Mi-kyung, a deputy manager at the company.
Cho Byung-jun, a 33-year-old environmentalist, and his bride Kim Jin-hee, 30, were married in a wheat field in Gangwon four years ago.
In what has been dubbed Korea’s first “green wedding,” guests were asked not to bring flowers.
Even the traditional bouquet was banished.
A makeshift toilet was set up in a corner of the field, the contents of which were later used as fertilizer.
The food served at the ceremony was organic.
Cho said the main concept was the environment, but the wheat field wedding also cut expenditures, such as hiring a venue.
“The cost of a wedding these days is so inflated,” said Cho, now a father of two sons. “A wedding is possible with just a little money.”
According to Ministry of Health and Welfare data from 2006, the average cost for a first-time wedding in Korea was 129.6 million won ($136,900).
Compare that with 78.5 million won in 2000. The money goes towards housing for the couple, the purchase of household goods (honsu), the exchange of jewelry between the bride and groom (yemul) and gifts of clothing between the families of the bride and groom (yedan). 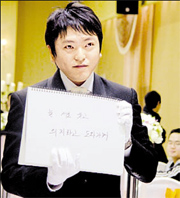 Cho Young-il reenacts a scene from the movie “Love Actually”at his own wedding. By Moon Gwang-lip

With so much money at stake, costs can cause tension. Some couples don’t survive the stress and separations before vows get exchanged are not uncommon.
According to the Korea Legal Aid Center for Family Relations, 7.3 percent of divorces in 2005 stemmed from conflict over wedding costs and gifts.
For foreign residents in Korea, the huge cost of a wedding is only a fraction of the mystery of a Korean wedding.
Sen Fukada, a 29-year-old Japanese woman married a Korean man in 2005. She has been to five Korean weddings so far, and she was surprised that weddings only lasted an hour. The other surprise was that not every guest watches the ceremony.
“It’s strange that the wedding guests are so restless,” the Tokyo native said.
“It’s a once-in-a-lifetime event for the couple. In Japan invited guests concentrate on the ceremony as much as the bride and groom do,” she said.
Sen said the problem is there are often usually too many guests.
“The idea that more guests means a better wedding doesn’t make sense. It’s better to invite people who want to congratulate the newlyweds sincerely,” she said. “It must be upsetting for the bride and groom to think there are guests who would rather be somewhere else.”
Some foreigners are setting a trend for themselves.
Reuben Staines, a 28-year-old New Zealander working for a Korean company, married a Korean in a restaurant in Seoul in September 2006. He and his bride gave speeches without an officiator. There was an open bar and a Korean rock group to get guests dancing.
“People often look embarrassed during their wedding ceremony. They are always told what to do,” Staines said of several Korean-style weddings he has attended.
“I wanted a wedding where I could participate fully and relax. I wanted people to have a good time and not just turn up, pay their money, eat and then leave,” he said
Women’s rights groups in Korea also object to conventional weddings, saying they conform to the male-oriented social order. In an effort to find alternatives, a campaign for “equal weddings” is gaining support.
The campaigning brides and grooms greet guests together, march together and make their vows with the help of a female officiator.
“In a standard wedding, women are treated like an object that the families exchange,” said Lee Eun-hye, a former activist of the Feminist Artist Network.
“The wedding needs to be arranged in a such a way that bride and groom get reminded that they are equals,” she said.
According to recent surveys, many young Koreans have a jaundiced view of conventional weddings, but the majority end up following the norm.
Park Sook-young, a wedding consultant at 21C Wedding, one of the many wedding shops near Ewha Womans University, said it will take years before wedding practices in Korea change.
“Many couples these days want a unique wedding, but they give up the idea after considering their families’ feelings.”