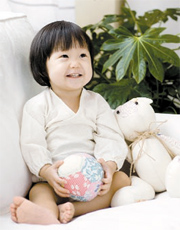 Organic baby goods are the easiest to find in Korea. Provided by Organic Born

With Korean markets running every day of the year, Seoul is undoubtedly a city of pronto moda, or “fast fashion.”
But many parents are opting for “slow fashion” through organic clothing.
Among eco-friendly fabrics, organic cotton is the most easy to find in Korea. According to the Organic Cotton Association of Korea, certified organic cotton is grown in soil where no pesticides have been used for at least three years.
The cotton is grown with natural fertilizers, free of agricultural chemicals and harvested and dried naturally. The fabric is also free from chemical dye. Organic cotton comes in three shades of natural colors ― beige, green and brown.
“Based on Korean mothers’ efforts to maintain the health of their families, organic foods are now a familiar concept in Korea,” said Lee So-hee, professor of child welfare studies at Sookmyung Women’s University.
“Organic clothing in Korea, in contrast, is a relatively new concept,” Lee said.
But, Lee added, in the past everyone used environmentally-friendly ways to make clothes. 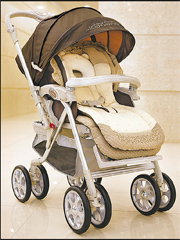 An organic stroller. Provided by Absorba

Among organic fashion items, baby goods are the easiest to find.
“They are particularly good for a baby’s sensitive skin,” Lee said. “Organic fabrics are beneficial for preventing skin problems.”
Encouraged by the popularity of organic products in Korea, Absorba, a French children’s clothing manufacturer, said it will expand its selection.
“The sales of organic baby goods increased by 20 percent in 2007 from that of 2006,” said Ahn Gwang-sun, a public affairs official at Absorba. “They are more expensive than other items, but the sales grow steadily.”
According to Ahn, Absorba used to offer infant clothing and bedding in organic cotton. As demand grew, a new line of organic items including bath towels, diapers, car seats and strollers will be on sale this month.
Other places to shop for organic cotton goods for babies and children are shopping sites such as www.organicborn.co.kr, ocotton.co.kr and greenuri.com.
Others also offer organic fabric and sewing kits for parents who want to tailor-make their children’s clothing, bedding and toys. 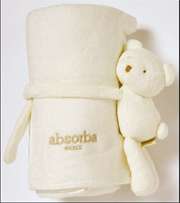 “In Korea, the concept of organic living has been misinterpreted as the domain of the wealthy class,” said Jeon Su-yeong, the designer and president of Organic Born, an online seller of organic baby goods.
According to Jeon, mothers are extremely happy with organic clothing. “We rarely see customers who want to exchange or return products,” she said.
“It is relatively difficult to find organic clothing outside Seoul, so a large part of our sales are to customers from around the nation,” she added.