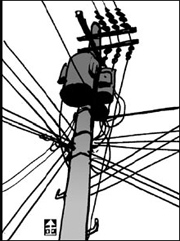 The common utility pole is a frequent subject matter for jokes. Several humorous books published in a series called “The Sparrow and the Hunter.” They occur in two simple places; the utility pole and the electric power lines.
I still remember two funny stories. The first is about a sparrow sitting on the power line. It was bold enough to use a hunter’s head as a toilet. The angry hunter said, “Don’t you have any underwear?” The sparrow answered, “Do you go to the bathroom wearing panties?”
The second story is about 100 sparrows sitting on a pole, all wearing bulletproof jackets. They were elated to see that the jackets blocked the hunter’s bullets. The sparrows sang songs, with their arms around each other’s shoulders. One sparrow wanted to look bold, so he took his jacket on and off, singing, “Hey, girl what are you doing down there, one floor below me? You don’t even know me, but I love you.” The hunter lost his temper and fired his machine gun blindly. That sparrow, unluckily, was shot dead.
Late at night, dim street corners of streets underneath utility poles are a well-known place for lovers to kiss. The most beautiful kiss in the world was not really a kiss between lovers. It is a Pulitzer-winning photo by journalist Rocco Morabito, dubbed “The kiss of life.” During the daytime, an electrician fell unconscious after getting shocked on an utility pole. His colleague held him tight and desperately tried to save him using mouth-to-mouth resuscitation. The photo is considered a masterpiece, showing people’s humanism.
But precisely speaking the term utility pole is incorrect. Telegraph pole is the official term. Telegraph communications were invented in 1837 by Samuel Morse of the United States. After the advent of electricity, electric and telephone lines were wired on the top of the poles. However, like steam engine trains of the past, we are still fond of the utility pole.
President-elect Lee Myung-bak has maintained that such poles at the Daebul Industrial Complex served as a symbol of too much bureaucracy.
The catchphrase, “Let us root out the utility poles inside our minds” sounds great.
I cannot understand why the utility pole is suddenly facing such adverse circumstances. Is it the pole’s fault?
Let us be clear.
Today I can hear the 8 million poles standing calmly all over the country whispering,“The person who made a mistake by putting the poles there should be blamed.”