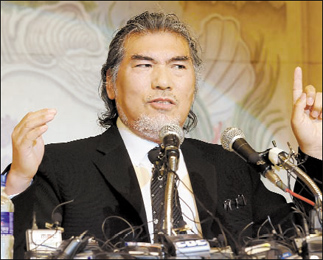 Enough is enough. If I run across just one more TV gossip news item about trot singer Na Hoon-a, I might be forced to ask the presidential transition committee to abolish cable TV.
I admit I brought it upon myself when I tuned into Na’s live broadcast last Friday.
The highlight was when the 61-year-old unzipped his pants to dispel recent rumors about him and his manhood.
I was watching the broadcast with my boss and colleagues.
Na had transfixed the 500 reporters packed into the hotel conference room as if he were the president-elect.
Na wailed about how the media had “killed” him by spreading groundless rumors.
My question is: Did he have to unzip his pants?
For the readers who were lucky enough to miss Na’s theatrics, here’s the condensed bottom line:
Na was rumored to have fallen in love with an actress who was the mistress of a member of the Japanese Yakuza, a mafia-like organization.
According to groundless speculations that washed around cyberspace, the Yakuza member was so infuriated that he allegedly exacted revenge on a vital part of the singer’s anatomy.
The story is enough to bring tears to your eyes ― for men at least. But the real pain started after the press conference.
From the seemingly decent mainstream TV news to trashy cable TV entertainment channels, the media had a field day.
Those cable TV entertainment shows copycat American tabloid-like shows such as “Hollywood E! News.”
Remaining true to their superficial and commercial-oriented characters, cable TV channels like O’live, On Style and tvN air shows about who’s dating whom, who broke up with whom, who’s rumored to be doing what, and so forth. Each show is awash with glossy photographs and red-carpet broadcasts of stars in fancy clothes.
Local cable channel tvN is most faithful to the Hollywood formula. It came up with a strange mixture of E News and reality shows in which the camera chases cheaters.
The tvN show is so faithful to the Hollywood E! News format that it’s even titled E News.
It was E News in Korea that dreamed up the Na special. The show claimed it had been pursuing the singer and his Yakuza story for nearly a year.
E News producers visited the singer’s agency, only to get kicked out. Then the show’s host visited the Busan neighborhood where the singer was rumored to have had surgery, only to be kicked out again.
All the producers managed to produce were just a few vague soundbites from passersby along the lines of, “Oh, well, I don’t think I’ve seen him [Na] lately.”
When the producers finally got quotes from passersby that were actually related to the Na rumors, they must have been relieved.
“Yeah, those Yakuza are really scary. They would do anything if their mistresses had affairs. The singer, I guess, would have been scared, too.”
Well, those anonymous commentators don’t register any authority, but that’s beside the point.
Then the show’s producers kept saying the singer had ignored the journalists’ demand to speak out.
So these self-proclaimed journalists just repeated and reproduced rumors. No wonder people call the press parasites.
I put up with this idiotic show for nearly an hour, just to check how far the show would go. Then I got an e-mail from the public relations office of one of those cable TV channels.
The press release bragged of their record-breaking audience ratings for the Na program.
I don’t believe in any god yet, but allow me to say this: Please, God, enough is enough!
sujiney@joongang.co.kr