Once a country that could barely produce its own ammunition, South Korea is looking to find its niche in the international arms market.
With little fanfare, the Defense Acquisition Program Administration told President-elect Lee Myung-bak’s transition team that it is aiming to increase the country’s arms sales to $3 billion by 2012, according to an official of the administration, who declined to be named. Last year the country’s arms exports stood at $850 million.
While government control seems to extend to preventing arms reaching the wrong hands, South Korean companies in the past have been involved in some shady deals, making government involvement imperative.
Just last November, the former president of Daewoo International, Lee Tae-yong, was slapped with a 50 million won ($52,000) fine ― other officials received suspended sentences ― for illegally trying to build an arms factory in Burma. The facility was geared to produce artillery shells.
Daewoo is currently involved in developing Burma’s natural gas resources. Lee left the company after the incident, and he is appealing his fine.
“It was an individual’s illegal act; otherwise the company would have been fined,” says Kim Bum-suk, an official at Daewoo.
Lee is now an external director of Korea Investment and Securities. Mun Chung-geun, an official at the company, said Lee was hired because of his overseas market expertise and that until a final verdict is reached, Lee should be considered innocent.
“If he’s guilty, I think we will see him step down. But until then, he’s done nothing wrong,” Mun said.
Forty-six countries imported South Korean arms last year, but detailed information on who is receiving what is not public information.
“Nations that purchase arms don’t want to reveal what they are buying since it reveals what’s in their arsenal,” says Major Park Seung-su, an official of the Defense Acquisition Program Administration.
Bang Jong-wook, an official of Poongsan, the country’s main ammunition manufacturer, says client information is “classified,” allowing himself to say only that “the company exports to countries where the military is in power or influential.”
In general, the government looks to the United Nations when deciding to give the green light to a potential export arms deal.
“We take various factors into account such as bilateral relations, human rights records and the domestic situation of a particular country,” says Park Chul-min, an official at the Foreign Ministry’s arms control department.
“There is a watch list of countries with certain concerns. If an arms sale is made to a country on the list, it won’t be for firearms or weapons but nonlethal military equipment such as transport vehicles,” Park says.
Air Force Captain Koh Hyung-geun of the Defense Acquisition Program Administration says the list includes about 30 countries and gets updated on a case-by-case basis.
“Countries that are subject to a UN arms embargo such as Burma are included on that list,” Koh says.
As human rights groups have frequently pointed out, companies and the South Korean government have colluded on arms deals in the past, which is what happens in other nations, too.
Industry officials say international arms dealers contact South Korean companies to broker deals, but the government actively lends a helping hand.
Hong Sung-jin, an official at S&T Daewoo, says military attaches working in South Korean diplomatic missions abroad sometimes oversee contracts.
“They come back with a deal in hand,” says Hong, whose company is the sole provider of the South Korean military’s firearms such as the K-2 assault rifle.
Some of the countries that S&T Daewoo does arms business with, according to Hong, are the Philippines, Indonesia, Nigeria and Colombia. His company is currently trying to include Pakistan on its client list for its K-4 grenade launcher, even though the country has tense relations with India over border conflicts.
There is no export ban in place on most of the firearms produced by S&T Daewoo.
Apart from small arms, South Korea exports ammunition, armored vehicles, training jets, gas masks and parts of U.S.-manufactured fighter planes such as F-15s, Korea’s primary fighter jet.
An official of the Defense Acquisition Program Administration, speaking on condition of anonymity, said South Korea was trying to sell training jets such as the KT-1 to countries in South America.
“We are pitching the idea that these planes can be used to counter drug trafficking operations.” He explained that target nations include developed countries and South America.
Last year, Defense News, a military affairs journal, published its annual list of the world’s top 100 defense companies. Korea Aerospace Industries placed 79th while Rotem was ranked 93rd.
KAI manufactures the KT-1 Basic Trainer Jet while Rotem produces the XK-2 Black Panther main battle tank with the help of the Agency for Defense Development.
The Black Panther is slated to become the country’s next-generation battle tank.
There are about 87 companies involved in the arms industry in Korea. Each company has a monopoly on its product. The top five companies such as Samsung Techwin make up about half the industry’s total arms sales, but the top five exporters change in ranking each year. 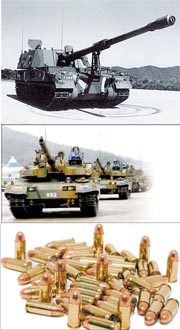 In order to make the defense industry more competitive, the Defense Acquisition Program Administration is implementing a policy starting next year that will scrap the current monopoly held by each company, thus freeing up the market to greater competition.
South Korean companies aren’t shy about filling their coffers when opportunity knocks. The country was among the top 12 countries that supplied arms to Iraq despite UN sanctions, according to a report in October 2004 by Charles Duelfer, the special adviser to the director of the U.S. Central Intelligence Agency on Iraq’s weapons of mass destruction.
At the time, five South Korean companies were listed as having been engaged in procurement projects with Iraq from 1998 through 2002, just before the Iraq war started in 2003.
Countries such as LG Innotech, now called LIG Nex1, which specializes in fiber optics and digital exchanges agreed to provide Iraq with 530 notebook computers specifically designed for military use.
According to Duelfer’s report, Iraq was planning to integrate the notebooks into its air defense system and artillery fire control mechanism. However, Duelfer concluded, “There is no evidence to suggest that the South Korean government was complicit in the transfer of prohibited goods.”
The five companies that did business in Iraq were LG Innotech, Shinsung Company, Unimo Technology Company, Techmate Corporation and Armitel.
At the time, Iraq was looking to purchase high-tech equipment such as sophisticated communications and radar systems.
None of the South Korean companies faced legal prosecution, as Washington didn’t press its allies to investigate the companies.
Government officials argue that there are now enough legal platforms in place to prevent arms exports to rogue parties. “Before 9/11 private companies weren’t aware of what was illegal or legal,” Park says. “Now they are asking beforehand and they are much more careful.”
While South Korea has domestic laws that regulate the arms trade, it has signed several international arms agreements such as the Wassenaar Arrangement on Export Controls for Conventional Arms and Dual-Use Goods and Technologies.
The Wassenaar Arrangement was established in 1995 to contribute to international stability and security. 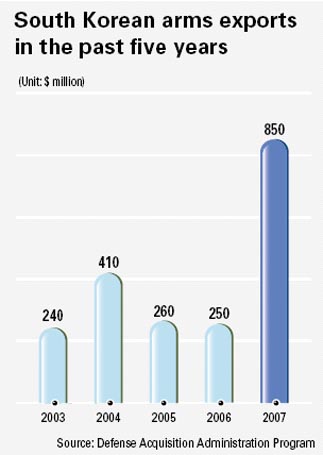 Except for large arms sales, weapons sales don’t receive much media attention here, but civic groups have started to take notice.
Arms Without Borders, an international civic group advocating gun control, named South Korea as one of the emerging arms exporters in its 2006 report. Traditional powerhouses include Russia and the United States.
The civic group criticized South Korea’s sales of Barracuda armored personnel carriers made by Doosan Infracore to Indonesia whose armed forces have a checkered human rights record.
The Stockholm International Peace Research Institute lists Australia, Bangladesh, Chile, Indonesia, Iran, Iraq, Kazakhstan, Liberia, Malaysia, New Zealand and the Philippines as past recipients of conventional South Korean weapons.
The ambitious goal of tripling the country’s arms income, from $850 million to $3 billion by 2012, is based on the country’s growing weapons industry.
The industry has tried in recent years to diversify its products from small arms to high-tech gear.
Rotem landed an order in 2001 worth $1 billion from Turkey for its K-9 self-propelled gun, of which 85 pieces were delivered by 2006, while Doosan Infracore has been exporting armored personnel carriers to Malaysia.
Doosan Infracore has been given priority negotiation rights to supply the main engine of Turkey’s next-generation battle tank. Last year Turkey ordered 55 KT-1 training jets worth about $500 million.
Industry officials say South Korean shipbuilding companies such as Hyundai Heavy Industries are also looking to export submarines. They’ve been built with German help.
In addition, the T-50 Golden Eagle supersonic fighter training jet made by Korea Aerospace Industries and developed in partnership with Lockheed Martin in 2005 is another product the country tries to sell globally.
The U.A.E. is expected to select a winning bidder for its procurement project early this year. The T-50, priced at 23 billion won ($25 million) per plane, is competing with the M-346, which is made by Italy-based Alenia Aermacchi, for the contract.
Nevertheless, some arms sales have to be cleared with the United States or other countries that provide technology to manufacture a particular weapon, or parts of it.
Ammunition for M16 assault rifles falls under this category. In the midst of trimming and rejigging ministries and government organizations, comments by one member of the transition team may indicate where President-elect Lee Myung-bak stands.
“The [Defense Acquisition Program Administration] statement that it could triple export sales was one factor that ensured its survival,” says the official, speaking on condition of anonymity.
Ju Ho-young, the president-elect’s spokesman, said earlier this month that President-elect Lee wrote to Sheikh Mohammed bin Zayed Al-Nahayan of the U.A.E. to make a case for Seoul’s T-50.