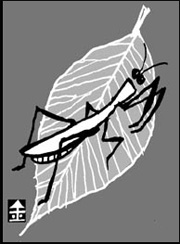 Sometimes an illusion makes people stray too far from where they should be, both virtually and physically. For example, we often see some people hanging around in bars, indulging in a sensuous life. In addition, extravagant people frequently visit department stores, not paying attention to whether they can afford to shop there.
If a person does something rash, we can be open-minded and consider the fact that he is blind with passion. However, if a person neglects his duties and does something really off the wall, we believe he should look back at what he did and reflect about the wrongdoing.
There is a witty remark that people interested in business administration and leadership might have heard about.
It is an aphorism by the American psychologist Abraham Harold Maslow.
“If a child plays with a hammer, he considers the whole world to be a nail,” he said. That raises the question, what sort of tool do you have in your hands?
Are you making a headlong rush into things, as if your solution to resolving just a handful of problems was the cure-all to every issue? Maslow’s aphorism points out that it is the height of folly to concentrate on just one part of an issue without considering the whole picture.
The work of President-elect Lee Myung-bak’s transition team seems great, but is poor in content. The team pledged to introduce its comprehensive plans for implementing English education reform in public schools, then back-pedaled a few days later.
The plan seemed rough-and-ready, like a mad dash driving ahead with a plan to reform the government. However, to the contrary, it was not able to pay due attention to the incumbent government’s stance and has had trouble following the proper legal procedures.
President-elect Lee’s management style seems to follow the “results-are-everything” principle. Lee was a successful chief executive officer in the private sector. I would like to ask whether the transition team might have indulged too much to get a tangible result while disregarding due procedures.
Where is the transition team being asked to stand right now? The team is being asked to run the national administration in a calm and sound manner. Don’t put the cart before the horse if you want to start an epoch-making business in Korean history.
A careful approach is needed. Separate the wheat from the chaff and have doubtful points explained. Be cautious of the pitfall that comes with the “results-are-everything” principle.