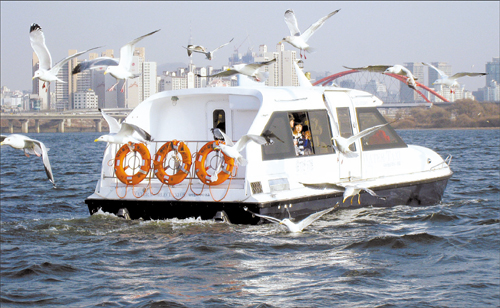 A 60-minute ferry trip around the Han River gets you close to the many species of migratory birds that stop over in Korea. [Pleasant Seoul]

For a perfect winter trip, I had imagined the magnificent spectacle of the snow-capped Mount Taebaek in Gangwon. Snow would coat the branches of the trees and I would sip hot chocolate in an igloo cafe after building a colossal snowman.
But in reality, I’m shuffling along a busy street in Seoul, careful not to slip. The sidewalk is awash with dirty slush.
This is nothing like my dream of Mount Taebaek.
I comfort myself that Taebaek will be packed with tourists visiting the ice festival at this time of year. Booking rooms and train seats would be a nightmare.
All I really want is somewhere secluded and natural where I can recharge, I thought to myself as I walked toward the riverside.
As I walk, I see a flock of seagulls wheeling over the windy Han River near Yeouido Park in central Seoul.
I shield my eyes from the bright sunlight and wonder what breed the birds are and where they come from. Their freedom in the skies is exhilarating.
Despite the pollution pouring out of the backs of the cars and buses that gridlock our roads, it is possible to find a natural oasis in the capital. If you take a trip to the Han River, you’ll spot many migratory birds. Many come from Siberia, including Chinese geese, pochards, herons and mergansers.
If you fancy birdwatching on the Han, you can book a water taxi. Seoul city launched 10 water taxis last fall as part of the Han River Renaissance plan. This is an urban development project aimed at transforming the river valley into a series of 12 riverside parks and cultural facilities 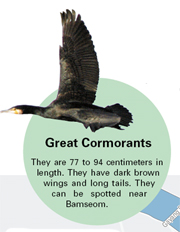 Kim Jung-ho, the vice director of Pleasant Seoul, the project team behind the renaissance plan, says observing migratory birds in Seoul is mission: impossible.
“On the water taxi, you can observe migratory birds with binoculars or just with the naked eye,” Kim says. “You can feed the herring gulls gonori, a type of anchovy.”
Captain Park Yong-jun greets me as I embark at the Yeouinaru Station dock. My fellow voyagers are a family from Gwangnyeong, Gyeonggi. Thirteen-year-old Kim Ki-tae is writing up a vacation project on the river taxi trip for school and wants to write an in-depth diary about the birds.
The boat’s captain hands out binoculars and leaflets containing information about the birds that we might see along the route.
The boat loosens its moorings and chugs out to Bamseom, an uninhabited shelter for migratory birds during winter near the northern shore of Yeouido. Bam means chestnut in Korean and seom means island.
There are two small islets here where you can often see Mandarin ducks, a national Korean treasure, among the willow trees and reeds.
In the past, Seoulites could only view Bamseom from a distance. Water taxis take you much closer, and the captain’s informative commentary is helpful, too.
“Migratory birds fly 7,000 kilometers south to escape winter,” Park says. They reach the nature reserves on Bamseom by mid-November to early-December. They return to Siberia in March to breed. 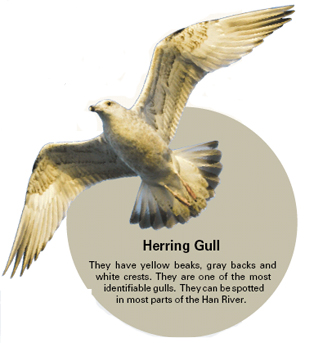 Mallards, mergansers, herring gulls, goosanders and freshwater cormorants are a common sight here. Black-skinned ducks and dabchicks are less common.
Coots were spotted in the waterway between the two Bamseom islets last December near the National Assembly building. Park has seen magpies chasing white-tailed eagles.
“Birds don’t rest in one place. Their migration patterns depend on the climate and food sources,” he says.
So if fish move downstream to avoid colder water, the fish-hunting mergansers will follow.
During the winter months, the branches of the trees on Bamseom turn white with bird droppings. “Most people think there must be chestnut trees growing on Bamseom,” Park says. In fact, the two islets are simply shaped like a chestnut.
The next port of call for our taxi trip is Seonyudo Park in Yanghwa-dong near the World Cup Station in Sangam-dong.
Flocks of birds rest under Yanghwa Bridge, and with the binoculars in one hand and the leaflet in the other, I feel like I am back in a natural science class in middle school. You tend to forget the basics as you grow older.
We didn’t disembark at Seonyudo Park, but the driver will drop you there if you wish.
Seonyudo Park was once a sewage treatment plant that pumped tap water into the southern part of the capital.
It was transformed into a public park in 2004.
If you slip out of the taxi here, you can ramble around the Han River History Museum. Displays present information on the local geological features and ecosystem. An aquatic botanical garden offers interesting snippets about aquatic creatures in Seoul’s main river.
The taxi then cruises under the wooden Seonyu Bridge to Dongbuichon-dong. The bridge is known as the Rainbow Bridge. Here you can throw the anchovies to the herring gulls. 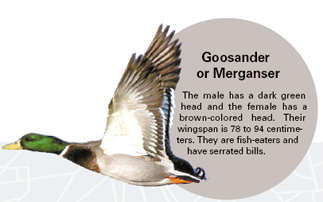 The birds used to be afraid of people, Park says, but now they allow themselves to fly much closer now. “They know people won’t harm them,” he says.
Several years ago you would be hard-pressed to see 30 or 40 fresh-water cormorants in Bamseom, but now numbers have soared to around 400.
You can see a fine example of geobukseon, an ironclad warship shaped like a turtle, when the taxi moors at Ichon Naruteo dock.
The turtle ship was commanded by Yi Sun-sin, a Korean naval leader during the Japanese invasions of Korea during the Joseon Dynasty in the 16th century.
A replica geobukseon made a trip from Ichon to Hansan Island in Tongyeong in 2005.

On the way to Yeouinaru subway station, I see shell holes dating back to the Korean War on one of the bridges.
You’ll also see commuter taxis during the rush hour. There are 11 ferries plying between Ttukseom Resort Station in Gwangjin District in eastern Seoul and Yeouinaru in western Seoul that operate during weekday mornings and evening rush hours.
These commuter taxis are just for people going to work. The 15-kilometer trip takes less than 15 minutes and a one-way trip costs 5,000 won ($5.29).
When our boat finally moors back at Yeouinaru Station boarding gate, I bid goodbye to the migratory birds and wish them a safe flight back to Siberia in the spring.
The tour hasn’t been the fairy-tale trip to Mount Taebaek that I’ve fantasized about. But I did meet a lot of new feathered friends.