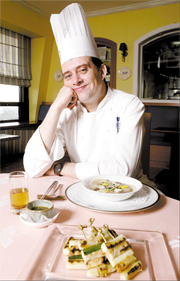 The pan-fried eggs look like autumn leaves floating among the flower-shaped dumplings.
Cloves dot the pears on a bed of ginger and dates like a lotus pond.
A spoon and a set of chopsticks gently rest on a rugged cinnamon stick.
It’s time to eat this lyrical feast.
Earlier this week, I asked Laurent Beltoise if he could devise three traditional dishes for Seolnal, or Lunar New Year.
Beltoise is one of the top French chefs in Seoul and he teaches French cuisine at Le Cordon Bleu in Seoul, a prestigious French culinary school.
The plan was to add a bit of France to traditional Korean recipes.
His concoctions were tteokguk, a rice cake soup; sanjeok, Korean brochettes, and baesuk, a dessert of simmered pear.
To get started, I left Beltoise two recipe books. But they turned out to be useless.
Beltoise already has a solid Korean food mentor: his mother in-law.
“I called her last night to check whether I was doing it right,” he says. “She’s a really good cook. Everyone tells her she would’ve become really rich if she had opened a restaurant. But she prefers to cook just for the family.”
The chef starts with sanjeok, a grilled brochette of beef and vegetables skewered on bamboo sticks. 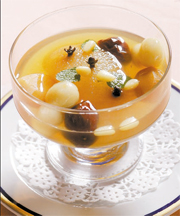 Baesuk, pears with cloves simmered with dates, ginger and chestnuts.

But instead of beef and the usual vegetables like carrots and scallions, Beltoise prefers marinated pork, rice cake, zucchini and pine mushrooms.
These are marinated in sesame oil seasoned with a spoonful of soy sauce, crushed garlic, ginger and other ingredients for marinating such as sesame oil.
“At first I thought the sesame oil was too strong,” he says, pouring the oil into a silver sauce bowl. “Now, it’s become part of my life. More and more top French chefs in gastronomic restaurants nowadays use sesame oil and sesame leaves in their recipes.”
Le Cordon Bleu has taken a considerable role in promoting Korean food.
In 2005, the school published “Korean Kimchi and Le Cordon Bleu,” a fusion cookbook that uses kimchi as a main ingredient. Beltoise was part of the project.
The book was one of the first efforts ever by world-class chefs to embrace Korean food as haute cuisine.
The recipes include chocolate cake topped with kimchi leaves dipped in syrup then baked in an oven, and rice pudding with orange-flavored kimchi.
The book won the Special Award of the Jury at the Gourmand World Cookbook Awards in Kuala Lumpur in May 2006. 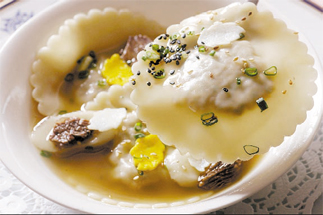 The hype for Korean food even hit Beltoise’s family and his colleagues in France.
“Now they can tell good kimchi from bad,” he says. “They know when it’s fresh and when it’s too old.”
While his assistant grills the brochettes in a pan, Beltoise moves on to tteokguk, a signature dish for Lunar New Year’s Day in Korea.
The minute he pulls out his cookie cutter from a kitchen drawer and cuts wrappers for the dumpling on a pre-made flour wrapper, everyone in the kitchen heaves a sigh of relief.
For many years, Korean women were driven into a holiday depression before Lunar New Year.
They put up with an enormous amount of kitchen work for the family’s guests.
Part of their burden was to crank out trays of mandu, or Korean dumplings, to make a traditional rice cake soup.
To make each piece properly, women were taught to cut out perfect circles of flour dough, fill each dumpling with one teaspoon of meat filling, fold the top into a half moon shape, seal, twist and pinch the dough until the folds were tightly closed.

Beltoise had a simpler method. Using the cutter, he made them into ravioli shapes. He placed the meat filling between two pieces of pre-made dumpling wrappers, which are available in supermarkets, and cut out the edges of the dough using a cookie cutter. They come with neatly scalloped edges.
To finish, he lightly sealed the edges with his finger.
Et voila! In less than three seconds, the Korean ravioli was ready to be dropped in the soup.
In addition, the chef used oxtail, laurel leaves and beef ribs for the stock instead of the usual beef knucklebones.
He let the soup simmer for four hours on a low heat. He saved the meat and later used it as the soup’s garnish.
Beltoise said the idea for the soup was similar to “soupe V.G.E.,” a black truffle consomme in beef broth with foie gras under a pastry crust.
The dish was created in 1975 by Paul Bocuse, one of the most important 20th-century chefs in French gastronomy.
The occasion was to thank former French President Giscard Valery D’Estaing for awarding the chef the Legion of Honor.
Originally, Beltoise thought of adding traditional French ingredients like foie gras into the dumpling’s filling.
Then he decided to skip it and went with the traditional way.
After sampling the filling, he adds an extra chunk of crushed tofu. It’s too dry, he explains.
“If we were in France, you would add eggs or cheese to make it softer,” he says.
The most imaginative part of making tteokguk is the fried egg topping that Beltoise describes as “an omelet.”
What he really meant was jidan, shredded eggs, which are used to decorate traditional soups like tteokguk or other fancy Korean dishes.
But instead of roughly chopped fried egg, he brought in tiny cookie cutters shaped like autumn leaves.
“It’s an intricate match,” the photographer for the interview says after tasting. “It’s a mix of a very good dumpling with French consomme.”
Beltoise calls his cooking style “a world cuisine” based on French gastronomy.
And he means it.
Originally from Paris, Beltoise spent eight years of his youth in Tahiti with his sommelier father, a native of Normandy in northern France.
The son continued traveling after he returned to Paris. He worked at Claridge’s, a hotel in London, and became an assistant chef on a Club Med cruise.
He met his Korean wife in the club’s PR section and moved back to France as head chef at the Spanish Embassy.
He lived in Portugal for about a year and spent another two years at Club Med.
Six years ago, he joined Le Cordon Bleu in Seoul as an instructor of French cuisine.
Despite his nomadic career, his gourmet credentials are strongly rooted in traditional French style.
His years in Paris included working in the city’s hottest restaurants like “La Poste” and “La Fontaine Gaillon,” now owned by the French actor Gerard Depardieu.
His exposure to international cuisine shows in his dishes, especially in his dessert that uses pears.
He makes baesuk by slicing pears that have simmered in a pot full of honey, dates and ginger.
On top of this, he adds lemon peel and whole chestnuts.
Traditionally, Koreans stick black peppercorns to the pears. Beltoise uses dried cloves for a stronger flavor.
As soon as he opens the pot, the rich aroma of ginger and cloves envelops the kitchen.
Just before serving, he adds rice cakes, pine nuts and fresh mint leaves on the top.
You feel the force on your mouth. The rich taste lingers on your palette.
Aside from the innovative food, the chef’s demonstrations cleared up a few misconceptions in Korea about the French and food.
One is that not all French people are fussy about food. Two is that some male chefs like to cook at home.
“I love going to Korean markets. I go whenever I can. I’m going this weekend with my mother in-law to shop for Seolnal,” he says.
‘Tis time for Lunar New Year.