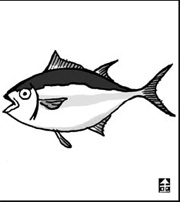 There are about 20 different types of tuna -- including bluefin tuna, bigeye tuna and yellowfin tuna.
Even bluefin tuna has two categorizations: Northern bluefin tuna and southern bluefin tuna, depending on which hemisphere, north or south, they live in. North Atlantic bluefin tuna can reach up to 3 meters, or 10 feet, in length, also weighing 560 kilograms (1,230 pounds).
Every year, more than 4 million tons of tuna are caught in the oceans and seas. Japan, the world’s largest consumer of tuna, eats one-quarter of the total catch. Korea also consumes 250,000 to 300,000 tons of tuna each year. Japan consumes 480,000 tons of bluefin and bigeye tuna. The United States eats from 30,000 to 50,000 tons.
Tuna is a food high in omega-3 fatty acids and selenium, which can help prevent heart disease and colon cancer.
Backed by people’s growing awareness of a healthy lifestyle, there has been a growing demand for tuna.
Greenpeace, the world’s most effective environmental activist group, maintains that bluefin tuna will most likely be extinct sometime in the next five years.
As the resource becomes depleted, the price of one bluefin tuna has soared, equivalent to the purchase price of a compact car in Japan. A full-grown fish is worth roughly 8 million to 9 million won ($8,500 to $9,500). Japan is making big efforts to replace the sushi ingredient with other ones.
In line with Japan’s national policy for the protection of its tuna resources, tuna aquaculture is on the rise. In Japan, juvenile bluefin tuna caught in coastal and offshore seas are cultivated three to five years in a tuna aquaculture farm, then sold in the market. In Korea, Tongyeong City in South Gyeongsang is considering tuna aquaculture. However, that also might create a vicious cycle in which other fish could be caught for the purpose of feeding the tuna. Some of the juvenile fish need to be protected.
Recently, The New York Times wrote an article saying that high levels of mercury had been found in tuna sushi sold in Manhattan stores and restaurants.
If you consume just six pieces of tuna sushi per week, your blood mercury levels could easily exceed U.S. government safety limits.
The Food Standards Agency of the United Kingdom has already recommended that pregnant women avoid eating tuna.
The issue seems to be a warning to humans: If people eat too much tuna, it could ruin both their health and the ecosystem, no matter how good it tastes.
The writer is a JoongAng Ilbo reporter specializing in environmental issues.