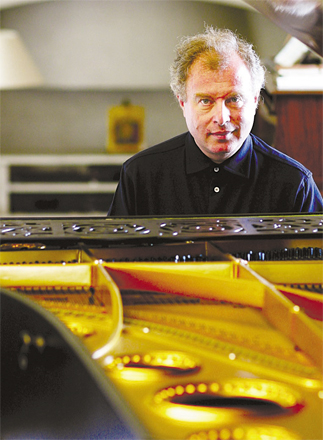 Andras Schiff is coming to Seoul to hold his first concert here. [YONHAP]

He is known as one of the best living interpreters of Bach, Schumann and Schubert.
Korea has never seen him perform live, but this will change when Andras Schiff gives a solo concert on Feb. 24 at the Seoul Arts Center.
Schiff, 54, will play Bach, Schumann and Beethoven at his first recital in Korea.
Schiff was born in Budapest, Hungary and began piano lessons at the age of 5 with Elisabeth Vadasz. Schiff went on to study at the Franz Liszt Academy of Music in Budapest, and then in London with the pianist George Malcolm.
In 2004, he began performing complete cycles of the 32 Beethoven piano sonatas in chronological order, and these are being recorded live in the Zurich Tonhalle.
Schiff has worked with many major international orchestras and conductors, but nowadays he performs mainly as a conductor and soloist. In 1999 he created his own chamber orchestra, the Cappella Andrea Barca, which consists of international soloists, chamber musicians and friends. In addition to working annually with this orchestra, he also works annually with the Philharmonia Orchestra of London and the Chamber Orchestra of Europe.
Schiff has been awarded numerous international prizes, the most recent coming in June 2006, when, in recognition of his interpretations of Beethoven’s work, he became an honorary member of the Beethoven House in Bonn, Germany.
In May 2007 he was presented with the renowned Italian prize, the “Premio della critica musicale Franco Abbiati” in recognition of his Beethoven piano sonata cycle.
In October 2007 he received The Royal Academy of Music Bach Prize, sponsored by the Kohn Foundation. It is given to those who make an outstanding contribution to the performance or scholarly study of Bach.
In 1990 he won the Grammy Award for Best Instrumental Soloist Performance (without orchestra) for his album of English suites by Bach. Yonhap