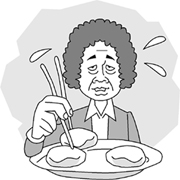 The leader of the peasant uprising that overthrew the Ming Dynasty, Li Zhicheng, became an emperor but quickly met misfortune. After defeating the Ming rulers, he assumed the emperor’s throne and entered Beijing but had to flee in just 40 days after being defeated by the Manchu, which established the Qing Dynasty. Another interesting detail is that the reason for his short reign is believed to be dumplings.
Dumplings that have a meat filling are known as jiaozi in China. The pronunciation is similar to the words for giving a child away, so dumplings were valued as a precious food. The word jiao carries the meaning everlasting and forever. That is why the emperors of China used to enjoy dumplings only on the lunar New Year, hoping that their rule would last long. But Li Zhicheng did not pay attention to this belief and ate dumplings every day. This is given as an explanation for why his dynasty folded up so quickly.
The dumpling has a long history. There are relics from the 6th century B.C. indicating that dumplings were enjoyed in this period. Among Tang Dynasty relics, desiccated dumplings were found in jars inside ancient tombs.
Dumplings are originally from northern China. Steamed dumplings, such as those served in Hong Kong, are from the south.
In Japan, dumplings are called gyoza. There are theories that the pronunciation originated from the Shandong-area pronunciation, gyaozi and from the Korean word gyoja which means a table, kyoja, set with food. In Japan dumplings are everyman’s food. In both households and restaurants, but dumplings are an essential food item; they are served in bars, ramen shops and convenience stores. There is even a theme park that sells dumplings. Japanese dumplings are crisply baked after being boiled in hot water.
Now all of Japan is in a tizzy over dumplings. After eating Chinese dumplings, over 1,000 people have come down with severe vomiting and stomachaches. Traces of insecticide were found inside the dumplings. It could be a coincidence, but the dangerous dumplings were made in Hebei Province in northern China, the home area of dumplings. That’s where steamed dumplings were enjoyed, and people looked down on crisp baked dumplings. It was thought that baked dumplings were leftover steamed dumplings that were then baked to eat. Now they have nothing to say regarding their dumplings. Of course, China has officially announced that there were no flaws in the making of the dumplings. Let’s just hope that they are safe to eat.