Bleak outlook for families of abductees held in North Korea

Bleak outlook for families of abductees held in North Korea 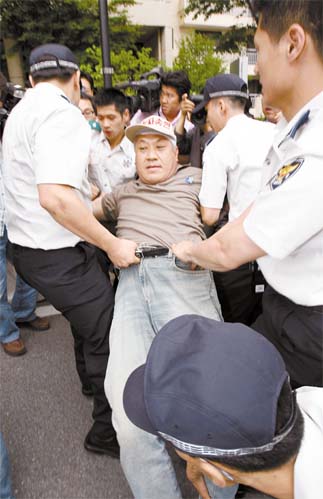 Conservative politicians aren’t the only ones welcoming Lee Myung-bak’s incoming administration later this month.
Civic groups and families of South Korean citizens who have been abducted by the North are hopeful that future inter-Korea talks will hasten the return of their loved ones, but government officials and experts say the issue won’t be resolved anytime soon.
Abductees from South Korea include fishermen, government-trained agents and commandos as well as prisoners of war dating back to the Korean War, which ended in an armistice in 1953.
These groups are hopeful because Lee’s administration has vowed to take a tougher stance against Pyongyang on human rights issues. It has also hinted that the flow of money from Seoul to the North in the past decade will now be more strongly linked to progress made in negotiations between the two Koreas on issues such as the North giving up its nuclear arsenal.
For those with family thought to be trapped in the North, the wait is a torment.
“I never saw his face, but on holidays when the whole family gathers we always talk about him,” said Kwak Hui-jin, whose grandfather, Kwak Im-seok, 85, was taken prisoner by North Korean forces in 1952.
But despite the hope, there is also curbed optimism. “We are hopeful, but at the same time we’re afraid there’s too much hype without actual action,” said Choi Sung-yong, head of the Abductees’ Family Union, referring to Lee’s tough talk on the North.
Choi, who claims to have brought home a number of abductees via China, argues for more government involvement. For instance, when bringing in abductees, the activist said he has to move people from hideouts in China to South Korean diplomatic missions without government help.
“If we have government officials picking them up outside South Korean missions, it’s much safer. Right now [the abductees] are exposed to danger,” Choi said.
A source familiar with the issue said that for a brief time agents of the National Intelligence Service attached to South Korean diplomatic missions in China escorted abductees from their hidden locations inside China to embassies or consular offices, but pressure from Beijing put an end to the practice.
The Sunshine Policy advocated by former President Kim Dae-jung and current President Roh Moo-hyun has succeeded in bringing the two Koreas closer and easing tensions on the Korean Peninsula.
However, civic groups here complain that the South Korean government has failed to use its leverage with Pyongyang to improve human rights in the North.
In fact, Pyongyang largely ignores Seoul’s enquiries as to the whereabouts of those held in the North, and to this day the North has never acknowledged abducting any South Koreans since the Korean War.
In 1957, both Koreas exchanged a list of missing civilians and Pyongyang confirmed the existence of 337 South Koreans in the North. It’s the only time Pyongyang has come close to the issue, and those 337 wanted to stay in the North, according to Pyongyang.
Those who deal with the North say the new South Korean administration needs to adopt a practical approach to inter-Korean dialogue.
“When you talk with the North you have to leave the door open so they can save face,” said former Unification Minister Lee Jong-suk, who was the first such minister to raise the issue of abductees in detail with the North.
During an inter-Korean ministerial meeting in 2006, Lee offered economic compensation for the abductees’ return. But before such a deal could gain momentum, he stepped down after a series of missile tests in North Korea later that year.
“They didn’t accept the proposal outright, but they didn’t reject it, either. That’s progress in the North,” argues Lee, an expert on North Korea and now an academic at the Sejong Institute.
The issue of South Korean prisoners of war still held in captivity from the Korean War is also part of the issue.
Defense Ministry estimates put the number at 548, but whenever the issue is raised in inter-Korean talks, Pyongyang stonewalls Seoul officials.
The North insists these particular men chose to stay in the North and that nobody is held against his will, thus there are no prisoners of war in the North. Yet, 70 POWs have escaped from the North since 1994 and returned to the South, including four last year.
While Seoul has made little progress on the POW issue, Pyongyang has. Three months after the first inter-Korean summit in 2000, 63 North Korean prisoners in the South who had refused to change their allegiance were returned to the North.
Colonel Lee Sang-cheol of the Defense Ministry’s North Korea policy division points out that bringing home South Korean POWs is highly complex.
Many of the POWs have families now in the North, he said. “If they come back alone, they are leaving people behind,” said the colonel, adding that President-elect Lee and his transition team have yet to formulate concrete plans to bring home South Korean abductees.
“Behind the scenes the government has tried very hard, but this is a political issue for the North and that’s why it’s going to be very hard to resolve it anytime soon,” he said. 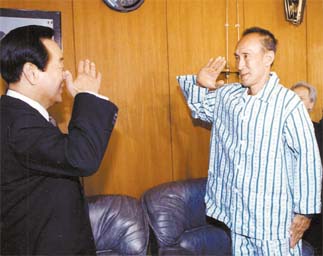 For now, the only option for POWs is to escape, a dangerous game but one that is sometimes aided by the South Korean government, according to a source familiar with the circumstances.
A government official speaking on condition of anonymity said safe houses have been set up with the help of the Chinese to protect South Korean POWs that escape from the North via China.
But these safe houses are not completely safe. Chinese security forces have sent back apprehended escapees to the North. South Korean government officials blame miscommunications between Seoul and Beijing.
Receiving even less consideration is the plight of spies and commandos trained for missions in the North. An official of the Defense Ministry speaking on condition of anonymity said about 125 commandos and agents are believed to be held in the North.
But because both Koreas signed an agreement in 1972 putting an end to clandestine missions, Seoul has denied ever having sent agents into the North.
Despite these denials, records from inter-Korean military meetings at Panmunjeom reveal that Pyongyang told Seoul several times to take back captured South Korean agents.
Defense Ministry Spokesman Kim Hyung-gi admitted that the issue was highly sensitive and that resolving it was difficult. “No government on earth will admit they send spies and commandos,” Kim said.
Despite public assurances from government officials, including President-elect Lee, that the issue of South Korean abductees will be tackled more aggressively, analysts say bringing home abductees from the North won’t be easy.
“It’s a matter of face for the North. Once they make an official announcement, it’s almost impossible for them to back down,” said Koh Yu-hwan, a North Korea specialist at Dongguk University.
The professor ruled out the possibility of any official repatriation taking place soon. “A long-term piecemeal approach is the only chance,” Koh said.
Past performance suggests Pyongyang is reluctant to come clean on issues that have become too politicized. In 2002, the North’s leader Kim Jong-il acknowledged in a meeting in Pyongyang with the former prime minister of Japan, Junichiro Koizumi, the abduction of 13 Japanese citizens in the 1970s and 1980s.
The Japanese nationals were allegedly used to train North Korean spies in the Japanese language and customs. Five returned to Tokyo later in 2002, but the issue has remained a major obstacle to improving ties.
In 2004, Pyongyang returned the remains of Megumi Yokota, said to be one of the 13 kidnapped Japanese, but independent tests conducted in Japan indicated that they were the remains of someone else. 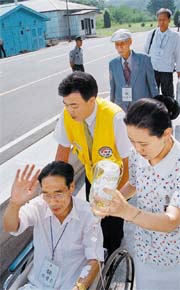 North Korean prisoners of war return to the North in 2000 through Panmunjeom.

With so many barriers blocking the path to repatriation, South Koreans like Kwak Sung-jong, 61, whose father Kwak Im-seok is thought to be working in a coal mine in Hamgyong Province in northeast North Korea, the wait is unbearable.
“I heard news about my father five years ago from another POW who returned home,” Kwak said. But although Kwak has asked the Defense Ministry about his father, he is just told to wait.
“[My dad] is not getting any younger,” Kwak said. “We just want him back with us.”