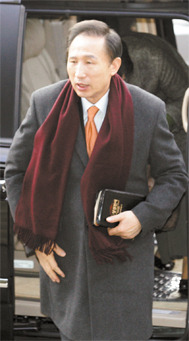 After President-elect Lee Myung-bak became an assemblyman in 1992, he volunteered as a traffic attendant in the parking lot of his church.
For three years, Lee helped church goers park their cars for the six o’clock morning service.
It was the best way he knew to get acquainted with the church’s members, which was essential to becoming a church elder, one of Lee’s pressing ambitions.
To understand Lee, you have to appreciate his long and close relationship with the highly influential Somang Church in Sinsa-dong, southern Seoul.
He has attended the church for nearly 30 years and built a strong political base there. Somang is one of the country’s largest Presbyterian churches with 60,000 members.
Deeply religious, on the night of the presidential election last December, Lee even held a worship service at his family home in Gahoe-dong, central Seoul.
With him were Lee Sang-deuk, his older brother and Vice Speaker of the National Assembly, plus Kim Ji-cheol, the chief pastor of Somang Church.
It was not the first time Lee had spent pivotal moments in his political career reaching out to God through his church.
On the night of June 13, 2002, when it became clear that Lee would win the election to be mayor of Seoul, he woke Kim Cheon-soo, another pastor at Somang Church. He wanted the pastor to arrange a special prayer meeting.
Since Lee got elected president, security has become an issue at Somang Church. It has been awkward setting up checkpoints at the main entrance to the property, so instead Blue House bodyguards mingle with the congregation at the Sunday services attended by Lee. Whereas former presidents including Kim Young-sam, who was also a church elder, didn’t attend church service while in office, Lee is still a regular on Sundays.

Just as he did before he won the recent presidential race, Lee arrives regularly through the hall’s main entrance 10 minutes before the morning service and always sits in the front row.
And the president-elect insists on coming to church every Sunday, his aides say.
Since getting elected, he has missed just one Sunday service. That was Jan. 13 when his transition committee was scheduled to make a major report. A deacon who has known Lee for 20 years says Lee still enjoys church on Sundays.The deacon says he likes to “drink coffee with his acquaintances and buy rice cake snacks from a street vendor on his way back home.”
At the end of his recent sermon, however, Kim Ji-cheol, the church’s pastor, urged congregants to pray for Lee Myung-bak, saying “it might be hard to see Lee in their church for a while once he takes office.”
Looking over the president-elect’s connection with Somang Church, you can see evidence of Lee’s determination and drive.
While he has never lost a public election, he suffered a defeat at Somang Church during elections for church elder in May 1994.
Consider Lee’s record in elections. In 1996, he defeated Lee Jong-chan, a strong candidate representing Jongno District, in the15th National Assembly elections. In 2002, Lee defeated Kim Min-seok, the leading candidate of the Democratic Party, to become mayor of Seoul. And he scored a landslide victory in the presidential election last December.
Yet in May 1994 Lee and his older brother both suffered defeat in a church election for elders for the Wednesday service.
During the second round of voting, neither Lee got more than two-thirds of the vote, which meant a loss.
“Even if you are a celebrity, it’s not easy to become an elder at Somang,” says one veteran elder at the church. One congregant at Somang who works in the legal sector became an elder after his eighth attempt, he explains.
A few years after the 1994 defeat, the brothers Lee finally got voted in as elders. But they were made to work for it.
In addition to working as a parking lot attendant, President-elect Lee, his brother and their wives were noted as active volunteers for the church.
The wives toiled away in the church’s kitchen to help prepare meals for over 1,000 people after services.
Kim Yun-ok, the wife of the president-elect, was a member of the church choir for the morning service. Choi Sin-ja, the wife of Lee Sang-deuk, still sings in the choir at its 11:30 a.m. service. When his wife sings in the choir, the vice speaker attends the 9:30 a.m. service alone.

Lee has been developing a strong political base at Somang Church, which he has attended for nearly 30 years. [JoongAng Ilbo]

Lee, the president-elect, first joined Somang Church in December 1978, a year after a small Bible study group among residents of Hyundai Apartment in Apgujeong-dong, near the church’s current location, started the church.
“At the time residents of Hyundai Apartment came to the church to listen Pastor Gwak Seon-hee’s sermons,” recalls Lee Sang-jeon, a veteran elder and a founding member of the church. “That’s when the Lees joined, including their oldest brother and his wife, too. The three brothers and their wives have been attending the same church ever since.”
When it was decided that the church needed a new building, the president-elect was able to offer his services. Local construction companies tend to avoid church projects, because the fees are usually based on the offerings they get from the congregation.
But Somang didn’t need to worry. Lee was CEO of Hyundai Engineering and Construction and his firm took over construction, which was completed in 1981.
“Hyundai kept the overall fee to a minimum,” says one elder at Somang. “It was all done through deferred payment. Now people would gossip that their CEO has created a loss for the company.”
Followers at Somang Church admit Lee has been highly influential in creating the church’s prestigious reputation. Somang was actually going through a bad patch in 2003 when its chief pastor was replaced.
But since the last presidential election, the number of newcomers has expanded from an average of 30 to 120 a month. It’s said that the font used for new registered members in the church newsletter has become smaller than ever.
During a service on Jan. 13, the congregation was asked to say a prayer to “thank the member of our church who was elected as president.” Lee was not in attendance that day.
The Lees are not the only prominent politicians associated with Somang Church. It has been a gathering place for many powerful figures over the years.
Among the church’s small groups is Sogeumhoi, an abbreviation for Somang’s Missionary of Financiers, which is led by the former head of the financing company KDB Capital, Kim Jae-sil.
Sogeumhoi members include Kang Man-soo, secretary for the economic subcommitte for the current transition team; Hong In-ki, the former director of the Korea Stock Exchange, and Lee Woo-cheol, the vice president of the Financial Supervisory Service.
Lee, president-elect, joined the group as an economic committee member of the National Assembly.
Lee also attends the “Pascucci meeting,” a group of Lee’s acquaintances that meets after church at a nearby Pascucci coffee shop. Members include Lee Sang-jeon, an emeritus professor of Yonsei University and Park Gyu-tae, the former director of Cheil Bank.
President-elect Lee often shared his concerns with the group when he faced opposition to the restoration of Cheonggye Stream when he was mayor of Seoul.
After morning services, Lee also participates in Hagilmo, a group comprising management-level figures of major conglomerates like LG, Samsung and Hyundai.
Aside from these smaller groups, the network within Somang is wide and active. More than 200 top military and political figures currently attend the church, including Lee Kyung-sook, the chairman of the transition committee, and Chung Mong-joon, a member of the Grand National Party and the sixth son of Hyundai’s founder, Chung Joo-young.
Other notable figures include Park Tae-jun, the former chairman of Posco; Yun Yeong-gwan, former minister of foreign affairs and trade, and Seo Sang-mok, the former minister of health and welfare.

But it’s not the first time that a president’s religious affiliation has become a subject of public interest. Religion has often served as a solid political base for leading politicians in Korea.
Former presidents Syngman Rhee and Kim Young-sam were both church elders.
Rhee, the first Korean president, was open about his Christian beliefs, swearing “in God’s name” during his 1948 presidential inauguration.
Christian groups supported Rhee unanimously until April 19, 1960, when student activists staged an uprising in which a student was killed by a tear gas shell.
Kim Young-sam, an elder at Chunghyeon Church, was noted as a devout Christian. Korean Buddhists protested when Kim said in a speech during the 1987 presidential election that “the sound of Christian hymns would fill the Blue House instead of that of a wooden Buddhist block” if he took office.
Rumors spread that major catastrophes like the collapse of Seongsu Bridge in 1994 took place while Kim was in office because he allegedly removed a Buddhist statue in the Blue House.
Blue House authorities actually invited the media to the presidential suite to prove that the statue was still there.
Kim’s successor, Roh Tae-woo, was a Buddhist. Rumors spread during the 1987 presidential elections that Roh, the leading candidate of the Democratic Justice Party, had pressured the Bank of Korea to inscribe a Buddhist symbol on its 10 won coin.
Fortune-tellers allegedly predicted that Roh would get elected if he dispatched 3 million Buddha statues to people’s houses.
Later, the Bank of Korea said the picture on the coin was “a statue of a lion, not of Buddha.”
The late Park Chung Hee, the country’s longest-serving president, was an atheist. Though his wife was a Buddhist, it’s been said Park never showed any interest in religion.
His eldest daughter Park Geun-hye, a lawmaker, is a lapsed Roman Catholic.
Roh Moo-hyun, the current president, was also a baptized Catholic, but he’s told aides that he’s “officially” an atheist.
Former President Chun Doo-hwan was acquainted with Christian groups while he was in office, but he turned to Buddhism by the end of his term.
He spent two years in exile in Baekdam Temple with his wife after he was released from jail for organizing a military coup and the Gwangju massacre in 1980. He was originally sentenced to death.
But many Koreans are worried that presidents can be too influenced by religion. That’s partly true, especially in the case of President-elect Lee Myung-bak, whose statements often mix politics and spiritual beliefs.
During a special lecture organized for congregants at Somang Church in April 2006, the president-elect cited a church community when discussing his philosophy of national management.
Similarly, people were puzzled that major posts within Kim Dae-jung’s administration went to figures from the same church as former first lady Lee Hee-ho, an elder at Changcheon Church, a Methodist organization.
Kim Young-sam appointed Kim Sang-cheol, a lawyer who went to the same church as the former president, as the mayor of Seoul.
Lee Myung-bak refrains from putting himself forward as a Christian president, especially after the controversy during his stint as the mayor of Seoul when he reportedly said in a Christian church meeting that he planned to “dedicate the capital city of Seoul to God.”
“Church and state must be separated,” says Kil Hee-sung, an emeritus professor of religion at Sogang University.
“It’s not appropriate to vote in a political leader based on his religious background. At the same time, a person’s religious freedom should be protected, even if he is a politician,” Kil says.