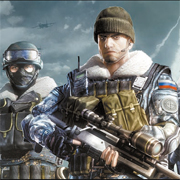 First-person shooting games nowadays have a hard time distinguishing themselves. The graphics are getting better with each new game released, but what else is new?
That’s where AVA (Alliance of Valiant Arms) comes in. An online shooting game developed by Neowiz, AVA has a game play built in that I haven’t seen in others.
Up to eight players on each side battle each other on various missions, ranging from escort to bomb diffusion missions.
Using an army ranking system, the player with the highest military rank usually becomes squad leader by default, but you can give up that position to other teammates if you want.
Squad leaders in other systems can give commands to fellow members of a team in a single mission mode.
In AVA, the squad leader’s performance is crucial to a team’s victory. Apart from giving out tactical orders, a squad leader carries binoculars for scouting the area for the enemy.
Opponents caught in the binoculars’ sights get marked in red, a sign that acts like a motion tracker.
This sign is visible behind walls for a limited time, so shooting someone becomes much easier.
Eliminating the opposing squad leader whenever possible puts your team at an advantage. Climb the ranking ladder and collect the medals.
The upside potential of an online game is that new weapons and missions maps are constantly added, bringing the occasional spark needed to keep a gamer interested.
This is a game for any true fan of the genre.