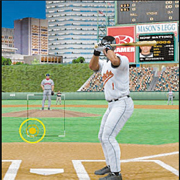 While you are waiting for the new season of the American pastime to start, “MLB 07: The Show” will keep you company.
This game rules the baseball genre, even compared to games available online.
A new feature is the role of the catcher.
In previous games or with other online baseball games available on the market, the catcher usually catches the ball thrown by the pitcher from the mound.
This has changed for 07. In the upgraded version, the catcher plays a more active role, leading the pitcher in what kind of balls to throw.
This feature makes the game much more authentic since the catcher usually leads the pitcher in a real-life game, rather than simply having the catcher catch whatever ball the pitcher throws from the mound.
You can also customize your own player and start from the minor or the major leagues, depending on your level of ability.
There are also truck loads of statistics on offer to help you think through the game and plan your strategy.
However, 07 is flawed in one respect: The controls aren’t that sensitive to hitting or catching the ball.
When the bat hits the ball, it feels too light. It’s the same when the ball blazes into the glove.
It’s not a serious fault, but it’s hard to shake off the thought that better graphic technology could have solved the problem.
The game itself is amazing, but graphics-wise we’ll have to hope for better in 08.
By Lee Ho-jeong