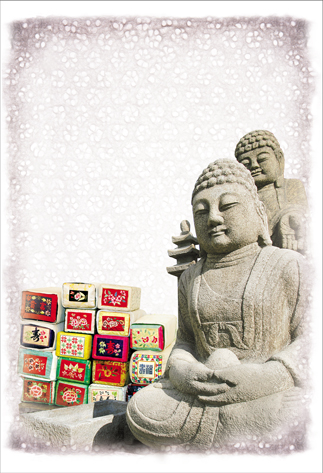 ‘Three thousand years and counting! This is a treasure that will see daylight one day! It’s a pearl in the mud,” insists Kim Ki-soon with a sweeping arm gesture. Kim is the owner of Song Juk Dang, one of the 125 or so antique shops located in Dapsimni’s antique shopping district.
A questioning look or a cocked head is all that’s needed to fire up Kim. “This may be cheap now, but further down the road I can see a couple of zeroes getting attached to the price tag,” says Kim nodding his head with strong conviction. If that is not enough, here comes the killer. He presents the classic I-too-want-it-for-myself argument, pointing at a row of pottery, “Some of them I am keeping for myself. Yup, that’s right.”
Kim has been refining his selling skills on the same spot for the past two decades. Although the district is not as well known as Insa-dong, which also specializes in antiques, Kim says he has no complaints.
Dapsimni pales in comparison to Insa-dong where apart from antique shops tourists can relax in cafes and restaurants and get hot drinks on a winter’s day. Not so here. All the shops are consolidated into three large buildings located on the same backstreet that starts at exit No. 2 of Dapsimni subway station on Line No. 5.
Buddha statues made of stone greet visitors as they leave the subway exit, but there are no shops on either side of the street. Instead, the journey starts at a large unprepossessing building about 30 meters away from the station. But go inside and it’s a different story. Like a labyrinth inside a pyramid, narrow hallways separate the numerous stores. The lighting is dim but adds to the close atmosphere that you might expect from antique shops.
There are shops that exclusively sell pottery or statues made from wood or metal. Then you have shops that sell anything from mysterious furs to cheap Chinese imitations of Tang Dynasty horse figurines. Prices range from 1,000 won ($1) to tens of millions of won for less common pottery pieces. What many shops have in common is that apart from Korean antiques they stock a lot of antiques from China.
A case in point is a prized piece of pottery that Kim bought from China’s Dandong region. “This is not a Chinese artifact. It comes from a part of the ancient kingdoms that were part of the Korean Peninsula in the past,” Kim argues, referring to a touchy subject in bilateral relations between Seoul and Beijing.
Due to its geographical proximity, China has become a popular place to hunt for North Korean antiques.
Ryu Jong-hyun, who has run Dae Il Sa since 1965, says you can easily buy antique pottery from North Korea in China. “It has been a bonanza for many years,” says Ryu, who runs his shop with his son. “There are unique stuff and there is certainly a market for it.” But he also warns of fakes, admitting that at times he has fallen for bogus items. 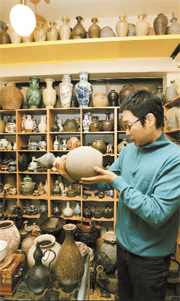 A shopowner inspects an ancient vase among goods sold at Dapsimni. By Kwon Tae-kyun

Ryu says his regular clientele includes many Japanese, a common phenomenon here where walk-ins are less expected.
“People come here because of word of mouth,” says Yun Sook, who specializes in antique furniture.
Her shop is located at Janghanpyeong, which is a 10-minute walk from Dapsimni and has two large buildings decked with billboards advertising the antique shops. While Dapsimni has lots of Chinese antiques, this area is more geared toward Korean ones.
She has been doing business for almost 30 years with her husband, and says shop owners are increasingly looking to China because sources for local antiques are drying up.
“It has gotten harder in the past decade or so to find gems. It takes more time now because so much has been sold,” Yun says. There are other reasons as well.
Kim So-yong, another shop owner at Dapsimni, points out that people are now more reluctant to sell antique goods that have been with families for a long time. There is a belief that they might hit the jackpot in the future. “TV programs that appraise people’s antiques encourage families to hang on to heirlooms or ask for prices that are simply too high,” Yun says.
Shops here differ in size and there’s a wide range of prices. So there is something for everyone if one invests enough time.
The furniture that Yun sells are priced from as low as 100,000 won to pieces such as traditional clothes chests from the late Joseon Dynasty that command price tags as high as 7 million won.
Shop owners here claim that their prices are often cheaper than their counterparts in Insa-dong.
All in all, if you are an Indiana Jones-minded antiques hunter and don’t mind listening to lengthy stories by shop owners invented or true Dapsimni is a pleasant district to browse around.
Most shops are handed down through generations. There are no price tags so prepare yourself for some old-fashioned bartering here.
Take exit 1 or 2 at the Dapsimni Station, line No. 5. Walk toward Cheongynangni and you’ll hit the Janghanpyeong area.