Up to the challenge

Up to the challenge 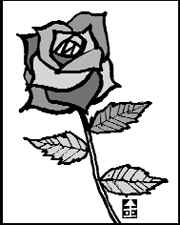 Cleopatra, the legendary beauty from Egypt, was crazy about roses. She used roses to make men remember her for a long time. The idea was that they would think of her any time they smelled the scent of a rose. When Cleopatra tried to seduce Mark Antony, or Antonius of the Roman Empire, she used rose perfume, which has an aphrodisiac effect.
Antonius could not forget the scent of the rose. He even ordered the people to spread rose petals over his grave before he died fighting against Caesar’s army. The petals were from a red rose. That is why the red rose signifies desire, love and passion.
The Thirty Years’ War is also known as the War of the Roses, since the noble Yorks used the white rose as their crest and the Lancaster used the red rose as their crest.
The War of the Roses ended as Henry the VII started the Tudor Dynasty. The House of Tudor’s royal standard, which is made of a red and white rose, is still used as the crest of England’s royal family. That is why the “Tudor Rose” represents both water and fire as well as unification and peace.
There are up to 25,000 kinds of roses, in 3,000 colors. The flower has more than 60 meanings, including both the English and French languages. The term “blue rose” means impossible in English. That comes from the fact that no roses are naturally blue, nor could one be created even with plant breeding.
Although the whole world has tried continuously since the 12th century to grow a blue rose, efforts have proved useless. A blue rose has only been possible in dreams.
But the Japanese liquor company Suntory has announced it has received approval from its government to sell blue roses, starting next year.
By transplanting the pansy gene that carries the delphinidin blue pigment into the rose, the company was able to produce the impossible blue rose. It took 14 years.
The founder of Suntory, Shinjiro Torii, had a favorite catchword, “Challenge.” That finally resulted in achievement. Out of the 260 billion yen ($2.4 billion) rose market, the blue rose is expected to grab about 20 percent.
During the past 14 years, however, Suntory only invested about 3 billion yen.
What is most interesting is that a liquor company started the research and succeeded in results. Maybe the common link is that roses, like alcohol, can make people spellbound.
The meaning of a blue rose should now be changed to “miracle” or “blessings of God.” I hope this year is a year of the blue rose for everyone, where all things that seemed impossible come true.