Parents used to drag their children away from watching TV cartoons because they thought they would have a negative impact on their children’s development.
There was also a time when Korea’s animation industry relied heavily on overseas subcontracts rather than original content.
Times have changed.
In recent years, the Korean animation industry has matured. Several local animation production companies are signing contracts for joint productions with leading foreign animators.
One such company is J Pictures, which signed an agreement last month with the Japanese animation director, Satoshi Dezaki, who worked on the animation series “Lupin the 3rd.”
The animation production company Taekwon V made headlines on Jan. 30 as the company announced the making of a Korean animated feature, “Taekwon V,” scheduled for release in 2009. Based on the 1976 animation of the same title, Taekwon V is a Korean robot that has been popular because of its nationalistic appeal. A consortium is expected to plow 6 billion won ($6.4 million) into the film.
Additionally last month, the characters of “Eon Kid,” or “Iron Kid,” created by Designstorm, a local animation studio, and manufactured by the global toy company, Playmate, are available at Toys“R”Us and 2,000 Wal-Mart stores across the United States. Iron Kid has been a hit in the United States.
“With one successful animation series, a company can make enormous profits, as business can expand to games, fashion, toys, accessories and more,” said Sohn Jung-sook, chief executive and executive producer of Designstorm.
Animation is seen as an industry with huge potential for raking in juicy profits. Even the Ministry of Culture and Tourism recognized the importance of the industry. Last December it made animation a key project for strengthening culture and tourism. Part of the plan is to connect local production companies with foreign distributors.
Between 2001 and 2005, Korea’s GDP grew by 4.5 percent. The cultural content industry grew by 9.8 percent during the same period. However, despite the potential glitz of the animation industry, some insiders say it faces a number of obstacles before business can take off.
Compared with the global cultural content market, Korea’s role on the international stage is miniscule. While Korean broadcasting content accounts for 2.6 percent of the global market, local publications a 4 percent market share and Korean film a 3.5 percent market take, the Korean animation industry accounts for only 0.3 percent of the global market.
“A lot of animators are switching to the games industry, although many still want to work on pure animations,” said Choi Ji-hun, 34, an animator who worked on “Odd Family,” which aired on KBS several years ago. He now works for a game company designing animated characters.
“Korea’s animation technology can compete with the United States, Europe or Japan,” said Choi. “The problem is the Korean animation industry hasn’t been planned well.”
He said few companies make enough money to reinveste in future projects. “Many production companies in Korea are relatively small operations with just a handful of animators,” said Choi.
According to the animator, the quality of the final product suffers because the animators have to work around the clock.
“While Pixar animators take a week or more to create a three-second animation, we produce two 30-minute segments of animation a month,” said Choi, adding that many studios find it tough to get financing for their projects.
In 2005, the animation production market was worth 221 billion won in Korea, according to the Korea Culture and Content Agency. Compare this to the 123.9 billion yen ($1.15 billion) investment poured into Japanese companies in the same year. Even in China, a late starter, investment in the market in 2005 was 454 million yuan ($63.18 million). In five years, the investment on animation in China is expected to increase to 1.1 billion yuan.
Choi said most investments in local studios are by foreign investors. “If you look at the big picture we think we are doing creative work, but at the end of the day it’s an OEM [original equipment manufacturers’] system because foreign sponsors can intervene in every aspect of production including the story-line,” said Choi. This means Korean animators have less control than they would like over their productions. 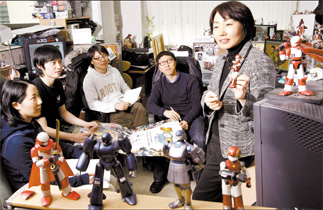 Sohn Jung-sook, chief executive of the Korean animation studio Designstorm, discusses the series “Eon Kid” with the company’s animators. Eon Kid has been a hit in the United States, but it has received scant attention here. By Ahn Yoon-soo

Lee Jo-jeong, a high-level official at the Korea Animation Producers Association, blames broadcasting stations that place Korean cartoons in slots outside prime time.
“Korea’s animation technology is highly advanced and it ranks alongside the United States, Japan, France, England and Canada,” Lee said. “However, the biggest problem is the air time Korea’s cartoons get on local TV.”
According to Lee, most get aired around 4 p.m., which makes it difficult for animation studios to secure high ratings.
“The targeted viewers are young children, but they are studying at hagwon [private tutoring institutes] when these cartoons get aired,” said Lee. “How can you raise your ratings when the targeted viewers are not at home?”
Lee said it’s difficult for studios to get a return on their investments because of the low ratings . “In a 4 p.m. slot it’s hard to get a rating of 1 percent, and for studios to survive they need at least 5 percent,” Lee said.
Since 2005, all Korean broadcasting stations have been required to air more than 1 percent of newly created Korean animation.
However, even Eon Kid, which ranks among the top five animations aired in the United States, has had low ratings in Korea. Some people don’t even know Eon Kid is Korean-made.
A 28-year-old senior studying animation at Hongik University who wanted to be referred to as Kim said many of his college friends are apprehensive about the future.
“We’re not worried about finding jobs because there are a lot of companies looking for new hands,” Kim said.
“We’re more concerned that few companies here are financially secure enough to continue a project. Because the industry itself is not substantial, many of my friends are looking for jobs in related fields, including the game industry, television networks and advertising companies,” he said.

Kim is one of the lucky ones: He landed a job at a studio called Liquid Brain.
“Many of my friends want to work at larger international studios like Pixar or Dreamworks,” said Kim. “But if Korea’s animation industry had better potential, they would stay and create work that is fully financed in Korea by Koreans for Koreans.”
Sohn of Designstorm said a company needs strong story ideas if it is to survive. Designstorm is already working on two new animations: “Kung Fu Island,” about legendary martial arts masters who hide out at a summer camp, and “Roy’s Dream League,” about a dachshund who dreams of making it big.
“This industry depends on ideas,” said Sohn. “You have to have fresh, interesting content that appeals to a range of viewers.”