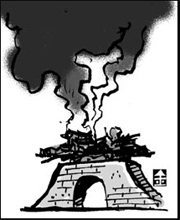 Registered as the first Japanese National Cultural Treasure by the Unesco World Heritage Center, the beautiful wooden Himeji Castle was built nearly 670 years ago. The long, thin floor boards still creak even today, although they now warn of approaching tourists rather than assassins, as was their original purpose.
Tours of the castle end at 4 p.m., when the sun sets, because there isn't artificial lighting inside the castle. This is mainly a precaution aimed at preventing a fire from breaking out. Electricity is only provided for the operation of firefighting equipment. Heat-seeking sensors situated throughout the building can give a simultaneous analysis of infrared and ultraviolet rays, a design which prevents the system from malfunctioning.
If a fire does break out in the castle, it only takes five minutes for fire trucks to arrive. Sprinklers hidden around the building are designed to work until then. Light water drops from the nozzles cascade down from nearly 20 meters above the ground, creating splendid water curtains. Japan paid careful attention to the water pressure and drop size to prevent damage. When the sprinklers are in action, it looks as if a watery fog is embracing the building. During the last five years, Japan had three fire accidents at its national treasures, all of which were the result of arson. The Japanese government spends 200 billion won ($212 million) every year on protecting national treasures and cultural properties from being harmed by accidents, preparing for the worst.
When we woke up this morning, Namdaemun, Korea’s No. 1National Treasure and a major tourist attraction in central Seoul was enveloped in flames and disappeared forever. There were public security buildings right next to it ― Korea’s National Police Agency and Namdaemun Fire Station. The soul of the city has collapsed in the very heart of Seoul.
Now, people are grappling with the fact that this tragedy is completely outrageous. But who can we blame? Perhaps the landmark structure wanted to remove the blinders from our eyes, drawing us from our indifference and shallow-minded management capabilities, so we work to preserve our remaining national treasures.
One statement in the national charter for the protection of cultural legacies reads: “Cultural legacies can not be restored once they are damaged. Therefore, we are committed to handing them down to future generations as they are.”
But we can no longer turn a six-century-old gate over to our descendants as it was.