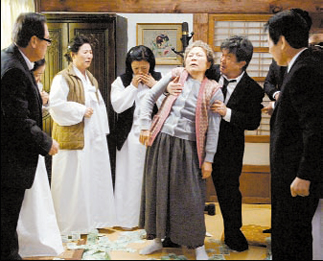 After the long Lunar New Year holiday, what’s left for me is a fight with my mother. One of the saddest things in my life is fighting with the woman who has been my best friend for decades.
But a long holiday can fray women’s nerves, and for us, fighting is an annual routine.
The problem is that after a dose of greasy holiday food, absurd TV entertainment and questions that target unmarried 30-somethings like me, people end up raspy.
Although the TV news over the holiday was mostly about how Korean families were enjoying their get-togethers, a more realistic program would have focused on a family feud.
Holidays are prime time for squabbles and acrimony between warring factions within a family.
This is why we have special TV dramas every holiday, in which family members bark at each other and dramatically (in other words, unrealistically), reconcile in the end.
This year MBC-TV took the main role in screening this kind of holiday drama with “Ssukbujaengi,” named after a common wild-flower and featuring a large family.
This kind of family is considered typical on TV, but in reality it’s fading fast as Korea’s families get smaller.
First there are the parents ― a father who makes a modest living as a farmer and a mother whose daily routine concerns her troublesome three sons and one daughter.
The first son is a successful but cold-hearted businessman who is married to an equally cold-blooded woman. The second son is a quick-witted but failed businessman who is married to a haughty yet cute woman.
Then there’s the childish third son who sits at the root of the family’s problems. His wife is all pouty because the rest of the family rarely helps her out.
Lastly, there’s the daughter who could not finish her schooling because the family, as traditions in Korea dictate, preferred to give its sons the best education. When the siblings gather at their parents’ country house, all hell breaks lose. The kids start shouting abuse at each other and the parents get tearful.
After much ado about absolutely nothing, the family rediscovers the value of bloodlines and genes and after much hugging and a few tears, equilibrium is re-established.
I was surprised to see that this silly plot earned such high ratings and was regarded as a “true family drama,” according to the local media.
Enduring the drama, I was thinking that the parents should just get a life and turn their backs on their kids and enjoy the rest of their lives. And I just wanted to watch the sons and the daughter fight to the death.
Actually, I was on the verge of screaming “Get a life, please!” while I was watching the daughter, whose life was all about sacrifice for her brothers. But I guess this subservient image of women is considered typical in this country.
In any case, any other depiction of a Korean woman would have been far too avant-garde for the holiday season when people should pretend to be happy and stories have happy endings.
My kind of holiday TV treat was a film screened on KBS-TV over the holiday called “Gajok ui Tansaeng (Family Ties),” which was about a new concept of family in modern times. After all, we all need a break from the kind of TV drama that tells us what our ideal reality should be like. Reality, in so many cases, is dissociated from the ideal images we see around us. But public TV networks like MBC-TV feel free to conjure up the kind of reality they think we want to see.
In the meantime, I’m relieved that the fight with my mother was nothing too serious and the would will heal in a few days.
O.K., I’ll call her tonight, as the smell of greasy holiday food fades away.