The butterfly flew free of the diving bell

The butterfly flew free of the diving bell 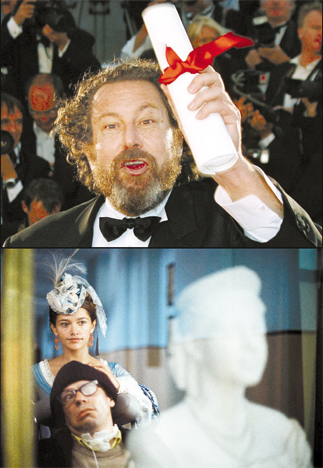 Top: Julian Schnabel wins the Best Director Award for “The Diving Bell and the Butterfly” at the Cannes Film Festival last year. Above: A scene from the movie. [JoongAng Ilbo]

Life can change in a second. What you take for granted could be lost in an instant, plunging you into the depths of tragedy.
This is what happened to Jean-Dominique Bauby, the former editor-in-chief of the French fashion magazine Elle.
Once renowned for his sense of humor and style, Bauby suffered a stroke at the age of 43 that left him almost completely paralyzed.
Bauby could think and was aware, but he could not move. The stroke had left him with locked-in syndrome.
Despite his condition, Bauby managed to write a memoir. Using a special alphabet, Bauby would blink to signal which letter he needed.
This painstaking process took 15 months to complete and led to the publication of “The Diving Bell and the Butterfly” in 1997.
Bauby, a charismatic writer and editor who lived life to the fullest, died shortly after his book was published.
A decade later, American filmmaker and artist Julian Schnabel, 53, has turned the memoir into a film starring the French actor Mathieu Amalric (“Munich”) as Bauby.
The film, which opens tomorrow in Korea, has been a critical success. Schnabel won Best Director Prize at Cannes last year, a Golden Globe Award last month, and he’s been nominated for Best Director at the Academy Awards.
In an exclusive e-mail interview, the director told the JoongAng Ilbo what motivated him to make this film.
“My father passed away when he was 92. He was afraid of death. I wanted to mitigate the fear, but couldn’t do anything about it,” Schnabel said.
By exploring Bauby’s thoughts on imagination and memory, Schnabel said he hoped to unlock insight into life and death.
Adapting a memoir into a film isn’t that simple, especially when the book focuses on only one character’s impressions and thoughts.
But to Schnabel, Bauby’s first-person narrative draws the viewer closer into the life of the protagonist.
By seeing the world exclusively through Bauby’s eye, Schnabel wanted to unpack the character’s innermost secrets.
To research the film, Schnabel met with Bauby’s friends and visited sites that Bauby was familiar with. He even visited the spot where Bauby fell when he had his stroke. Other scenes were shot on the actual locations mentioned in the memoir, adding to the film’s authenticity.
Schnabel also used non-actors who were Bauby’s real-life friends. The first nurse to appear in the film, for example, took care of Bauby when he was in hospital.
The scriptwriter, Ronald Harwood, also took pains to understand Bauby. He spoke with Bauby’s ex-wife and two children.
“I wanted viewers to watch the film through Bauby’s inner world,” Schnabel said.
The difficulty of filming the book lies in trying to represent Bauby’s view of the world.
Schnabel, known for his experimental art, angled the camera as if viewers are looking through Bauby’s left eye.
In addition, several scenes were shot with Amalric inside a box. The actor could hear but he could not see, an environment that replicated Bauby’s real-life situation.
While Schnabel is full of praise for Amalric’s remarkable performance as Bauby, the part nearly went to actor Johnny Depp.
Depp first proposed the idea of making The Diving Bell and the Butterfly to Schnabel. He would have taken the lead role with Schnabel as director, but his schedule was already full with the filming the third installment of “Pirates of the Caribbean.”
Depp also couldn’t shave off his character Jack Sparrow’s beard to play Bauby.
With Depp unavailable, Schnabel cast an eye over suitable actors and spotted Amalric.
“I liked Amalric’s previous work and the fact that French is his mother tongue,” Schnabel said. The film is in French and takes place in France, as Schnabel couldn’t imagine the film being filmed in English.
The result is a movie about freedom of the mind from the shackles of the body.
“I decided to stop pitying myself. Other than my eye, two things aren’t paralyzed: my imagination and my memory,” says Amalric as Bauby in the film.