Fernando Botero is a household name in the Western art world for painting characters that are often naked and delightfully corpulent. But few recognize him as a great still life painter.
Botero uses vivid references to colonial traditions in Latin America by painting food and objects that are typically found in middle-class Colombian households.
“Still life with watermelon” is a prime example. The painting is on display at Opera Gallery Seoul as part of the gallery’s “Botero and Andy Warhol” exhibit. The show is a rare display of works by the Colombian artist who turns figures from medieval and Renaissance art into exaggerated distortions.
His imagery in the watermelon painting is both strikingly visceral and comical.
Botero brings in a giant slice of watermelon alongside bananas and a pear missing bites, next to what looks like a traditional tin kettle and a ceramic bowl. The highlight of the work is an electric light switch on the wall behind the fruit bowl, a cheerful reminder of reality.
In many ways, Botero satirizes the conventions of Western still-life paintings, which are often a display of luxury.
Instead of sticking to the typical peaches and apples, he brings in meats and sweets.
In his “Still Life with Ice Cream” from the 1990s, Botero filled his canvas with intense pinks, greens and oranges, conveying the Colombian flavors of a feast.
In his horrendously large bronze sculpture “Reclining Woman,” the artist playfully distorts the enigmatic figure of a woman lying down by exaggerating the scale and pose of the original character.
Botero’s works resonate with Andy Warhol, the other artist featured in the exhibit, partly because both artists turned down modernist ideals of abstraction, a dominant style in the mainstream art world of their time.
Botero went into figurative art; Warhol chose Pop Art. 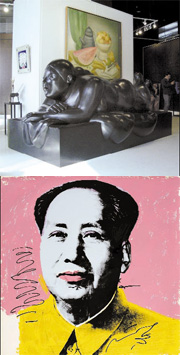 “Still Life with Watermelon” and “Reclining Woman,”top, and above,“Mao” by Andy Warhol. By Opera Gallery Seoul

Botero plays on idealized feminine beauty by turning Gustave Courbet’s “Nude Woman Reclining” into the disturbing form of a nude girlish figure. Warhol, on the other hand, embraces candid icons of American pop culture and transforms them into high art.
Both artists’ works resemble the other’s.
Both Botero and Warhol debuted in the 1960s and succeeded critically and commercially in the art world.
In 1961, the Museum of Modern Art bought Botero’s first work, as if signaling the new direction of figurative art. The following year, Ferus Gallery featured Warhol’s first exhibit of Campbell’s soup cans.
These events eventually birthed the fame of two formerly marginalized artists who led the next century of Western contemporary art.
“Botero and Warhol” runs at Opera Gallery in Naturepoem Building in Cheongdam-dong. For more information, call (02) 3446-0070.