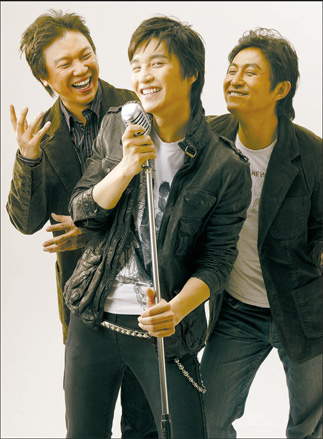 From left: Chung Sung-hwa, Kim Da-hyun and Seo Bum-seok. Provided by the organizer

Drugs and drink ended the career of former rock star Choi Gon, but his popularity bounces back when he stars in a hit talk radio show.
That’s the basic story behind the musical “Radio Star,” a musical version of the 2006 movie of the same name directed by Lee Jun-ik and starring Park Jung-hun and Ahn Sung-ki.
The musical Radio Star is currently playing at the Towol Theater in the Seoul Arts Center, southern Seoul. It runs until March 2.
The fictional Choi peaked in the late 1980s, but 20 years later he’s on his uppers. He’s been busted for smoking marijuana and for physical assault following bouts of drunkenness. He’s now a nameless singer at a small cafe in Misa-ri, Gyeonggi.
But Choi’s manager Park Min-soo, (played on alternative nights by Seo Bum-seok and Chung Sung-hwa), eventually gets Choi a gig as a talk radio D.J. in Yeongwol, Gangwon.
The show’s a hit. It reaches out to people in the countryside who call in to talk about families and relationships.
Radio Star is a typical “movical,” the stage version of a previously released movie. “Singles,” currently running at the Hoam Art Hall in central Seoul is another example.
“Films and musicals combined bring more visual and auditory pleasure and theatrical drama,” explains a press release for Radio Star.