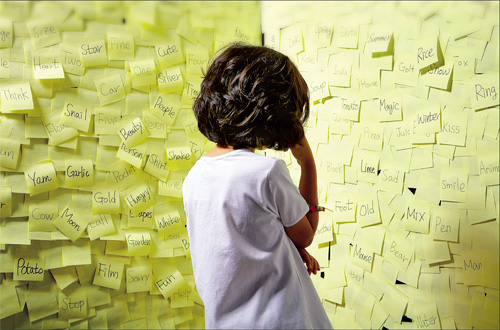 “Even just a graduate from high school will be able to conduct a conversation in English,” promised President-elect Lee Myung-bak before his transition team presented details of a plan this month to overhaul the country’s struggling public English education system.
Lee’s determination to implement his plan is causing a stir here as teachers, more accustomed to teaching grammar, are afraid of losing out while the private education sector is embracing the move as another opportunity to fill their coffers.
All the while, opposition parties have seized the opportunity to attack Lee, blaming him for trying to devise a policy that will only benefit the wealthier classes. People think that spending on English-language education is bound to increase, which is ironic because Lee’s aim is to achieve the exact opposite.
Chun Se-young, a professor of education at Chungnam National University, who as a member of the transition team is involved in shaping Lee’s educational policy, dismisses criticism that the incoming administration’s policy ignores reality and is merely a political sideshow.

“It’s essentially a focus on elementary school-level English education but it’s not an entirely new idea. We are building on existing foundations,” Chun says. “Besides, the English exam portion on the college entrance exam will be replaced by a new one in 2013 that emphasizes speaking, writing and listening skills so that the schools can change the current emphasis on grammar.”
A close aide to Lee Ju-ho, a Grand National Party lawmaker, who was appointed as the chief presidential secretary for education, science and culture earlier this week, stresses that the new policy is necessary for South Korea to be competitive on the international stage.
“We talk constantly about globalization and English is a fundamental tool needed. Yet, how many people on the street do you see who are comfortable chatting with a foreigner in English and giving directions?” says the aide. “The current English education in place is not helping to groom citizens for this age and time.”
The new administration’s attempt to improve Koreans’ English-language skills is aggressively targeting the public education sector, yet past government attempts suggest that a willingness to push through with reforms is essential to bringing about real changes.
The Seoul city government surveyed 1,000 residents in 2003 to identify how the city could establish itself on the international map.
The results indicated that 74.2 percent of respondents said they couldn’t comfortably communicate with foreigners. The purpose of the study was to launch free English education classes for citizens.
At the time, 70 percent of the surveyed people said they would take the classes if offered. 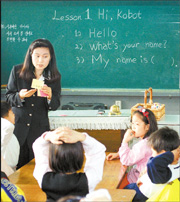 A teacher conducts an English class in Hannam Elementary School in Seoul in 1997, the year English classes became compulsory for this age group in public school;

“The original idea was to find areas that we needed to improve in order to become a global city, but policy implementation based on the survey never came,” says Chang Yeon-bae, a Seoul city government official.
The new government plan calls for all English teachers working in elementary, middle and high schools ― approximately 33,000 teachers in all ― to teach English classes in English by the year 2012.
Meanwhile, the number of hours of English-language education in elementary schools will increase from one or two to three hours per week. The Kim Young-sam administration started English classes from the third grade in elementary schools in 1997.
Lee’s policy also requires that 23,000 additional teachers who can teach in English get hired.
Those targeted include former diplomats, foreigners, people who have studied at colleges in English-speaking countries, English majors and holders of master’s degrees and teaching certificates. Also, starting in 2009, 3,000 Korean English-language teachers will be sent abroad every year for five years for intensive training. Earlier this week, the transition team said 4 trillion won ($4.2 million) would be set aside to pay for these training programs.
Nevertheless, current English teachers, who are more accustomed to emphasizing grammar and reading in their classes, haven’t welcomed these new plans, especially since school education here is geared towards college entrance exams.
The Korean Federation of Teachers’ Associations surveyed 1,000 members recently and found that more than 60 percent opposed the idea of teaching classes in English.
Teachers are arguing that current class sizes and teaching materials are inappropriate.
“Why put the blame on us? Parents and students have been asking us to teach in a way that their kids can get good scores in their college exams,” says Chung Sa-yeol, a teacher at Namseoul Middle School in eastern Seoul.
An English teacher for 17 years, he argues that other problems exist. “If we want to focus on improving the students’ speaking ability, we need much smaller classes,” he says. 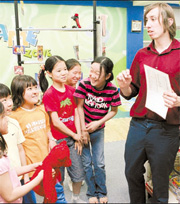 The transition team said it will try to cut class size from 35 students to 23. “That is not enough,” Chun argues. “We need much smaller sizes to attend to each student’s needs.”
The people behind the newly envisioned policy take a different view.
“I think there is an underlying fear among teachers in Korea that native English speakers may take their jobs, or that students will question the teacher’s ability to teach English,” says an official of the transition team, who declined to be named.
However, teachers like Hong Wan-gi, an English teacher at Yongsan High School in Seoul, says the issue should not focus simply on whether or not a teacher can conduct an entire English class in English. “This is not the complete issue,” Hong says.
Whether or not a teacher is a qualified and competent educator is also an important factor.
“As a teacher, you have to be qualified to teach students of different levels,” Chung Sa-yeol says.
“If you get a foreigner to teach just because he or she is a native speaker, the quality of education could suffer,” Chung says. “Teachers here have passed a very difficult exam to get into teaching, which should say something. They may not be native speakers, but they don’t have to be.”
Michael Rudder, the regional English language officer for East Asia based at the U.S. Embassy in Jakarta, Indonesia, agrees.
In Seoul this week as part of a routine teacher-training visit, Rudder says being a native speaker does not automatically make you a good teacher.
“Good language teachers need not be totally fluent in the target language,” he says. “What is more important is the knowledge and skillful implementation of an effective methodology. Creative and skilled teachers can obtain very successful results, even with limited resources.”
In the face of heavy opposition, the transition team has already backed out of a plan to conduct other subjects in English.
While teachers are concerned about the impact of the proposed new policy, English-language institutions here are anticipating a possible financial bonanza.
“Since the government’s announcement, we have seen a surge of inquiries by parents for our junior English-speaking classes,” says No Ji-seon, an official at Pagoda Language Institute, one of the country’s largest English-language schools.

The school has an average of 50,000 students per month attending its adult language classes.
“We haven’t seen a dramatic increase in demand yet but we think it’s a given once the official stamp is put to the policy,” says Cha Kyeong-shim, an official at Pre-School Academy, an English-language institute for children that charges 1 million won ($1,058) per month per child.
In a country where parents would do almost anything for the education of their children, the potential monetary fallout should be enormous. A report by the Samsung Economic Research Institute a year ago said that individuals here spend an estimated 14.3 billion won per year on English-language education, about half of which goes on fees for official tests like the Test of English as a Foreign Language and the Test of English for International Communication.
Clearly, South Koreans’ ability to speak English doesn’t reflect the vast amounts spent. The Political and Economic Risk Consultancy in Hong Kong published a report in 2005 in which business executives and expats in the region placed South Korea as the most difficult country to communicate in English among 12 countries in Asia.
South Korea’s average score for the Internet-based Toefl test from September 2005 to December 2006 was 72 points, ranking it 21st out of 28 countries in Asia. Only North Korea, Japan, Mongolia, Vietnam, Macao, Taiwan and Cambodia ranked lower.
What’s more, more Koreans take Toefl than in any other country, according to Thomas Ewing of the Educational Testing Service. A total of 162,000 South Koreans in 2005 and 2006 took either the online, paper or computerized Toefl.
“We don’t have volume figures for the most recent year past but again, I’m sure South Korea remains the largest Toefl test-taking country in the world,” says Ewing, warning that countries’ scores should not be used to compare English-language ability. Other factors should be considered, including the number of test-takers and the English educational system in place.
Colleges, business conglomerates and government agencies and ministries in Korea use Toefl and the large number of students vying for places at colleges in the United States accounts for the high number of Toefl takers. It’s not unusual for test-takers here to buy slots to take the Toefl on the Internet or fly overseas to sit for the exam.
Chung Cheong-rae, a lawmaker from the United Democratic Party, argues that the new policy put forward by President-elect Lee has not been planned well and will only benefit families with high incomes.
“This policy will fuel the private education market, and those in Gangnam [a wealthy area in southern Seoul] are the only ones who can afford to keep up. What about the countryside and other places?” Chung asks. “I’m not saying we should not improve our public English education system, but there are many other considerations.”
For parents, these are anxious times. “I’m just worried what the cost will be. We have started to look at various options to prepare our child for whatever will come,” says Choi Myeong-suk, 37, whose 6-year-old daughter is preparing to enter elementary school next year.
At the end of last month, rock singer Shin Hae-chul added his two cents during his Internet radio show, “Ghost Station.” He said sarcastically that Korea should just add itself as the 51st state of the United States or become part of the Commonwealth of Nations.
“First the Defense Minister and the president should conduct their cabinet meeting in English, then the National Assembly should conduct their sessions and votes in English,” Shin said.