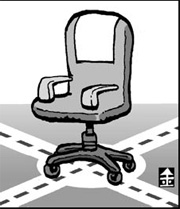 The Chinese word for “shortcut” first appeared in a story by Qu Yuan, a poet of the Chu state in the Spring and Autumn period of ancient China. But the word started to be widely used much later for another reason.
During the Tang Dynasty, there lived a man named Lu Cangyong. He passed the national examination to serve in the court but was not appointed to a high position. He then came up with a plan which would involve taking one step backward temporarily to advance much further later.
He went to Zhongnan Mountain, south of Xian, which was a center of Taoism at the time where countless wise men had lived in seclusion. He built a shabby hut and began the life of a hermit.
Eventually, his plan worked. The court sent someone to fetch him. They thought there must be some special reason why a government official would leave the world behind to live in the mountains. He then started serving as a court official during the reign of Empress Wu Hou and rose to the position of prime minister under Emperor Xuanzong.
Meanwhile, there was a man who was Lu’s exact opposite. Sima Chengzheng was a real hermit, not a bogus one. The court acknowledged his competence and offered him a high position numerous times. He persistently refused, but in the end he took the offer and entered the court. But after he arrived, he could not stand it for more than a few days. The emperor repeatedly tried to prevent him from leaving, but Sima still went back to live in the mountains.
Seeing Sima off, Lu asked where he was headed. Sima replied that he was going to a remote mountain that was not Zhongnan. Asked why he was choosing not to go to the renowned Taoist mecca, Sima answered that the mountain now seemed to him nothing but a shortcut to officialdom. Lu must have grown very red in the face.
In Korea these days, many people seem to be trying to take a shortcut. Professors who have constantly been observing the powerful and professionals like lawyers and journalists loiter on the shortcut path.
In “The Analects of Confucius,” Lun Yu says that a scholar takes a high position if his learning is sufficient. But most of those who seek shortcuts do not seem to have excelled in their fields in the past.
Instead of focusing on their expertise, they flock to the powerful like moths to flame. These people believe in power and act as if being part of an administration means a big success in life.
Our future is at stake if the young generation also perceives this as real success.