Does this kimchi come from China?

Does this kimchi come from China? 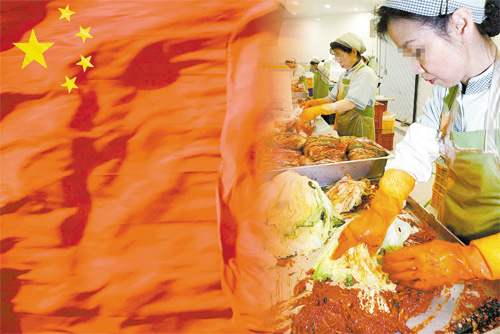 Han Jae-wook, a 33-year-old office worker, said he eats lunch every weekday at restaurants near his office in Yeouido.
Needless to say, he and his lunch partners consume vast quantities of kimchi, but where does it come from?
“Just today while we were eating my colleagues and I were talking about how our rice and seonji [cow’s blood stew] looked like they came from China,” said Han.
Han admitted that much of the kimchi he had been eating in his favorite restaurants over the years might have been imported from China.
“I just presume it’s imported,” said Han. “It would be difficult to make all this kimchi just with cabbage harvested in this country.”
But he said he isn’t worried. Despite recent stories about the quality of food from China, not all of it can be health-threatening or low quality, Han said.
Wohn Hae-jeong, a mother of two who works for a technology company in Gangnam, is more cautious.
She said when she goes to nearby grocery stores she always checks the label to see the origin of the product.
“My husband and I try to choose products that are produced in Korea,” said Wohn.
She said some of her acquaintances are skeptical of Chinese imports.
“When I think about my family’s health, Chinese imported foods just don’t seem safe,” Wohn said.
However, she eats lunch at nearby restaurants even though she assumes some ingredients are imported from China. “I have no choice and everyone else eats them.”
A worldwide trend of avoiding Chinese food products is growing rapidly. Japan is currently locked in a diplomatic standoff with China over food.
A large number of Japanese are no longer buying imported food products from China following a recent food poisoning incident.
Japanese authorities said they found traces of methamidophos, a toxic veterinary chemical, in imported Chinese dumplings.
What’s more, The New York Times last week reported that the United States Olympic Committee will take its own food to the 2008 Summer Olympics in Beijing.
Even Trader Joe’s, an American grocery chain with 285 stores in 23 states, announced this week that it is banning imported garlic, frozen organic spinach and soybeans from China until April 1.
However, the Korea Food and Drug Administration this week announced that dumplings imported from China and sold in Korean stores had been found to be free of agricultural chemicals following random testing.Since China and Korea reopened trade in 1992, Chinese food has maintained a huge presence in the Korean food industry and on the tables of the average Korean home.
According to the Korea Customs Service, 5.9 million tons of agricultural, fishery and processed food products were imported from China in 2006.
Imports rose to more than 8.5 million tons last year.
A report by the Korean Food and Drug Administration in 2005 found that among 67,505 imported goods from China that underwent sanitation inspection, 527 were destroyed or returned.
In 2006, out of 76,985 goods inspected, 381 were disposed of or returned.
China was the country that had the largest number inspections as well as the largest amount of products that were disposed of or returned.
The United States came in second with 38,000 items inspected and 152 marked “inappropriate.”
Despite the large number of items labeled as “inappropriate,” market experts say it’s difficult to run a business or set up a table without Chinese imported goods.
“It’s really hard for restaurants to operate using only local materials because of insufficient supplies as well as the prices,” said Kim Tae-gon, public relations officer of the Korea Restaurant Association.
Kim said the primary objective of running a restaurant is to make a profit. “Without Chinese imports, many stores would go out of business,” Kim added. “Additionally, the low price of Chinese goods helps stabilize the consumer prices of agriculture and fishery goods, making other local items affordable.”
According to Kim, there are approximately 600,000 restaurants in Korea that are less than 50 square meters in size, accounting for slightly less than 50 percent, or 260,000. Kim said a majority of these small businesses have to rely on cheap imported Chinese goods or else raise prices, which would hurt business.
Business owners aren’t the only ones relying on Chinese imports. Ordinary Korean households also have little choice but to use imported Chinese products.
A study by the Korea Rural Economic Institute showed that 99 percent of ginger in Korea is imported from China. Additionally, Chinese spring onions, garlic, red peppers and perilla seeds have dominated 90 percent of the market since 2005. The study said that in three to five years, Chinese agricultural products will make up half the supplies in Korea.
Hong Moon-pyo, a Grand National Party lawmaker, in October last year, citing studies by the Korea Rural Economic Institute, said Chinese kimchi imports rose from 28,000 tons in 2003 to 178,000 tons in 2006.
He estimated that shipments would have reached roughly 230,000 tons by October 2007, though figures for 2007 are not available yet.
If that’s the case, Chinese kimchi is taking up 34 percent of the kimchi market in this country.
Kim said the government is responsible for managing the safety of food products imported from abroad. 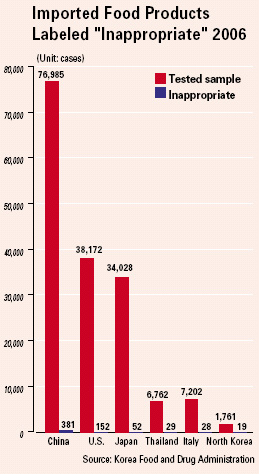 “It’s hard to say that restaurant owners intentionally have a diabolical scheme to serve unsafe food to customers,” said Kim. “Food imported from China or any part of the world should be checked thoroughly before it is distributed to restaurant owners.”
Kim said the only preventive measures currently available are through frequent inspections by customs officers and the food and drug administration, as well as through a stronger and more transparent labeling system.
“We have been tightening inspections on imported Chinese food for a very long time, even before issues concerning Chinese goods became international,” said Suh Gap-jong of the Korea Food and Drug Administration.
“In 2006, we added 200 additional people to the team responsible for inspecting imported goods. That team is now over 350 people in total. In 2007, we increased random testing from an average of 2 percent of the imported quantity to an average of over 10 percent,” Suh added.
Additionally, the Korean Food and Drug Administration sent its people to inspect manufacturing plants in China.
Citing that it is the responsibility of the Customs Service to regulate illegal imports of Chinese products by individuals, the administration has been conducting inspections once or twice every month.
“It’s safe to eat food imported from China,” Suh added.
However, Suh admitted that the administration did not inspect the safety of processed food products until now.
“Exempting processed food from inspection is a global trend,” said Suh. “But in the wake of the situation in Japan, we have decided to tighten regulations and inspections on processed food.
Small or larger operations are very sensitive about using imported Chinese goods, although they don’t deny that some of the food they serve is imported from the neighboring country to the west.
Korea had a major issue with imported Chinese cabbage and kimchi in 2005. Lead traces were found in imported kimchi, followed soon after by a discovery of parasites.
Korean restaurants at the time put up signs that said they used only cabbage harvested from Korea, and many owners started to prepare their own kimchi.
Nolboo, one of the largest Korean restaurant chains in Korea, said all the cabbage it uses for kimchi served in its restaurants comes directly from the southern region of the Korean Peninsula.
“We try to use just Korean food materials. However, other ingredients such as red pepper may be imported,” said Chung Hyeon, a public relations employee at Nolboo.
CJ Food System caters to more than 300 companies in Korea, said Chinese food products make up only 7 percent of the total material they use. Total imported goods account for 30 percent. 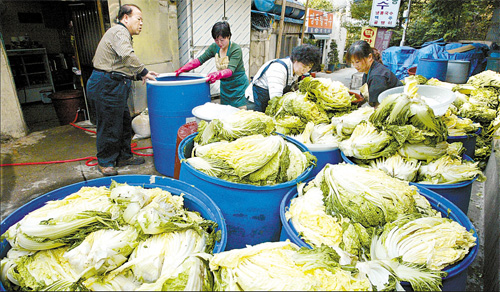 
Most of the vegetables are from China, CJ said. The company only uses Korean cabbage when making kimchi. The company said it cut the cost of the more expensive Korean cabbage with direct mass purchases from cabbage farms.
The catering service uses Chinese vegetables only when there are none available from local farms, or when the quality and the price of the product is more competitive.
Most of the smaller restaurants were sensitive to the issue. Some were offended just at the mention of “Chinese imports.”
A Korean restaurant in Samcheong-dong, said all its food was local and no Chinese food was used. Sesame, however, was imported from the Sudan, staff said.
Another restaurant in the same neighborhood famous for its sujebi, a flour and potato soup, denied using Chinese products. They said their kimchi was purchased at local markets, which in turn claimed the kimchi was harvested locally. A small eatery in Shinchon in Seoul famous for tteokbokgi, or spicy rice cakes, also stressed its food was Korean.
But when asked if they had checked the origin label, they hung up.