Bjork turns concert to raucous carnival of sight and sound

Bjork turns concert to raucous carnival of sight and sound 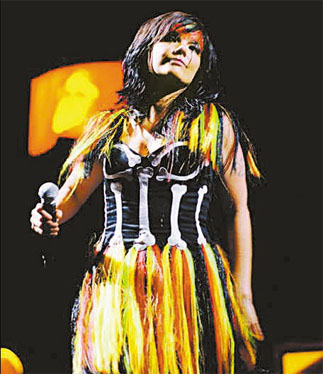 Bjork is a ringmaster.
On Saturday night at Olympic Hall in southeastern Seoul, her band, her music and her audience were the circus.
From the moment she marched onstage to her final wave amid a storm of confetti, the band, the music and the audience followed her every instruction.
Although she is on the tail end of an 18-month tour to promote the 2007 release of her album “Volta,” none of her trademark energy or quirkiness has become diminished.
Having arrived a little late, I was stunned when I made my way to my standing-only section, the lights went out and the crowd began to cheer. Like an explosion, the 10-piece Icelandic brass band, other musicians and the bafflingly beautiful Icelandic songstress herself marched onto the stage.
It struck me like a punch.
Her first track, “Earth Intruders,” could not have had a more appropriate name. Her brass band wore oddly shaped Oompah-Loompa outfits with red flags atop their heads. The other band members’ instruments were hardly recognizable, but gave bursts of electronica and dance.
And then there was the petite and captivating Bjork.
She wore a fluffy pink dress that few people in the world could get away with wearing. Laser bursts accompanied some of the faster songs. Your eyes told you that you were in the future.
When the ringmaster wanted everyone to stop and listen, she sang a ballad. The sad, heartwarming “Joga” from the album “Homogenic” is usually accompanied by strings, but the horn section added depth and power to the song.
When celebration was in order, the electronica and beat kicked in and the ringmaster bounced around the stage, encouraging everyone to dance with her.
Some of the instruments displayed on video monitors looked more like the landing controls of a space shuttle, but the techno beats complemented Bjork’s voice well.
Bjork’s music is like a clash of Old World baroque and classical styles and New World computerized and concocted beats. Sometimes it is desperately bare and raw, other times joyously celebratory.
Not once did Bjork miss a note. She masterfully turned vocal growls into high-pitched childlike nuances.
But the highlight of the night was easily the encore. In a moment it captured everything that was amazing about the night: the perverse and often baffling visuals, the intense vocals and the powerful music.
After we sang a member of her band “Happy Birthday” (which now means I have performed with Bjork), she delivered “Anchor Song” from her first solo album, “Debut.” It was raw and highly emotional. She then left with a message and a flurry, as “Declare Independence” from Volta left you regretting the end of the carnival.
It was like a group of people landed in Seoul to show us what the sounds and sights of the future would be. And to be honest, it looks pretty good.