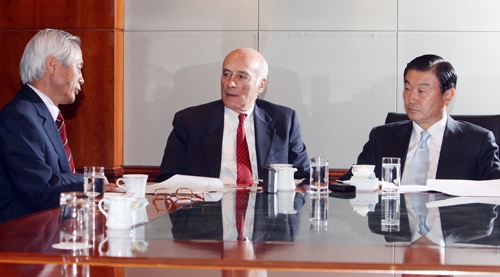 The incoming administration needs to take advantage of Korea’s “soft power” -- its ample experience in promoting democracy and human rights and its cultural influence -- to draw North Korea closer to reunification, according to Joseph Nye, a professor at the Kennedy School of Government at Harvard University.
Nye, who served as the United States assistant secretary of defense for international security affairs during the Bill Clinton administration, is a pioneer of the so-called soft power theory of international relations, which emphasizes the influence of culture and ideas rather than economic or military incentives.
Nye visited Seoul earlier this week to meet with Korea’s President-elect Lee Myung-bak and take part in seminars hosted by the Korea Foundation. At the end of his three-day visit, Nye sat with Kim Young-hie, a senior JoongAng Ilbo journalist, and Yim Sung-joon, the president of the Korea Foundation and a former ambassador.