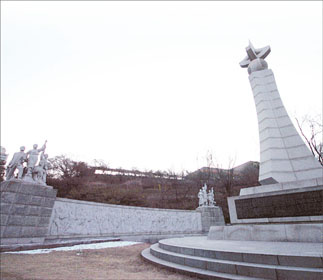 A monument between the National Theater of Korea and Jangchung Park commemorates the March 1 independence movement against the Japanese. Jangchungdong has various monuments and statues that mark the struggle against the colonial occupiers. By Lee Ho-jeong

Jangchung-dong, the neighborhood at the foot of Mount Namsam in Seoul, is like an open museum dating back to the colonial period and the early years of military rule in the 1960s.
It’s a perfect place to travel back in time to see modern Korean history before the nation began its economic rise.
The trip starts from Jangchung Park, located across from the Shilla Hotel and Jangchung Stadium. The park, built in 1920 by the Japanese, was the site of numerous independent rallies against the Japanese regime and other political campaigns.
Today it is a neat park with Japanese apricot trees lining the paths and a handful of elderly Koreans often on hand playing a traditional chess game known as janggi.
Even on a bitterly cold Thursday afternoon, six men were absorbed in a game.
“I’ve been living here for nearly three decades,” said Lee Sang-hoon, 72, one of the men playing. “This park has been part of my life for so long and even at this age I start my day by walking my dog here for an hour at 4 a.m.,” said Lee, whose breath reeked of soju.
“To me, this is more than a park,” he continued. “It is where I hang out with friends.”
According to Lee Dong-hwan, chief executive of the Research Institute for City and Humanity, most people associate jokbal (steamed pork) with Jangchung-dong rather than anything political.

Jangchungdanbi,was erected in 1900 as a monument to guards who died fighting the Japanese assassins who murdered Queen Min.

“However, there is more to it than a cluster of pork restaurants,” Lee said.
The professor added that Korea’s modern history is inextricably linked with Jangchung-dong.
“This area was the center of Korean politics and culture,” Lee said. Although the neighborhood has fallen off the radar in modern times for much of the public, Jangchung-dong is still a place where Korea past and Korea present coexist.
Also, because the land here is government-owned, preserving the neighborhood has not been a problem.
“If this area was privately owned, it would have been redeveloped and we would have lost a part of our history,” Lee said.
Jangchung Park, for example, is where the late President Park Chung Hee and former President Kim Dae-jung held rallies for their various presidential campaigns.
Until 2002, this was where many presidential candidates announced their goals and policies to crowds of people gathered for campaigns.
The first thing that catches your eye when you come here is the old stone Supyo Bridge, which spanned the Cheonggye Stream until 1959.
When construction began on the highway that ran above the stream for many years, the bridge was moved. The Supyo Bridge currently found at the restored Cheonggye Stream is a replica of the original.
Not far from the bridge in Jangchung Park is a 2-meter tall stone monument among some pine trees called Jangchungdanbi, which means Jangchung Stone Monument.
The stone tablet was originally housed within a shrine that was constructed in 1900 on the orders of King Gojong to commemorate the royal guards who died trying to protect Queen Min, Gojong’s wife, from her assassins in 1895.
The calligraphy on Jangchungdanbi was written by King Sunjong, who at the time was the crown prince. The shrine was originally located on the spot where Yeongbingwan, a large conference hall built in 1978, now stands in the grounds of the Shilla Hotel in central Seoul. 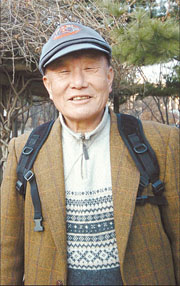 Lee Sang-hoon, a long-time resident of Jangchungdong enjoys playing janggi, a form of chess, with friends on the neighborhood park’s benches.

This is where the Korean royal family held rituals every spring and fall for the guards who tried to save Min, but the shrine was destroyed during the Korean War.
The stone tablet was relocated to Jungchung Park in 1969.
To the right, steps lead up to a statue of Samyeong, a Buddhist monk who fought against the Japanese in the 16th century.
Several statues commemorating independence movement activists such as Lee Jun-yeol and Lee Han-eng can also be found here. There is also a smaller park commemorating the March 1 independence movement nearby.
The Japanese police shot dead many Koreans during these anti-colonial protests.
At the end of the park near the entrance to Dongguk University is the Jangchung Little League Baseball Stadium, which opened in 1972. It is the only baseball stadium exclusively for children in Korea and today it hosts competitions for kids. The stadium is in good condition and grass is planted even in winter. After five months of remodeling the stadium was reopened last March.
Major league baseball pitcher Park Chan-ho ran a series of pitching workshops here in 1998.
Next to the stadium is an easy trail leading up to Mount Namsan. You only need to walk up a few steps before you find yourself confronted with a view of the neighborhood ― it’s a stunning location to watch the sun set.
Once at the top, which is only about 300 meters, there’s an exercise area.
It’s common to see young couples here enjoying a romantic walk. Nearby there’s a traditional Korean hanok called Seokhojeong, which houses an archery institute set up in 1970.
The institute dates back to the 17th century after Korea was invaded by the Japanese. The kings of Joseon encouraged their citizens to improve their archery skills.
If you walk towards the National Theater of Korea, the trail eventually splits into two. One leads to N Seoul Tower, the other to the theater, which was built in 1973.
In was here that Yuk Young-soo, the wife of President Park Chung Hee, was assassinated while her husband was giving a speech in 1974.
Unknown to many people, at the entrance to the theater there are sculptures of several little-known artists, one of which is of Park Seung-hee. In 1919 he created a group that helped found modern theater in Korea. Another is of Cho Tae-won, a modern dance pioneer.
Across from the National Theater is the Freedom Center, which hosts the Korea Freedom League and Yejiwon, a private institute founded in 1963. Yejiwon acts as a kind of finishing school for Korean women, training them in the mysterious arts of traditional high society. The Tower Hotel, which is just a few meters away, was built the same year as the Freedom Center, another relic from the Park Chung Hee regime.

The Freedom Center, built during the Park Chung Hee administration, is a symbol of the Cold War. The building once housed an Asian anti-communist center. By Lee Ho-jeong

Park, who seized power in a military coup in 1961, expressed his anti-communist credentials by setting up the Asian People’s Anti-Communist Center in what is now the Tower Hotel.
The Tower Hotel’s 16 floors symbolize the 16 allied countries that fought on the side of the South during the Korean War.
The Freedom Center echoes the period of the 1960s with its bold and heavy exterior. The architecture is striking because this kind of retro design echoing the national security state of the period is now rare.
As you wander through the hallways you can get a sense of the Park Chung Hee regime.
This building once struck fear into the hearts of people with its ominous ideological overtones. Today, the parking lot serves as a drive-in movie theater. On the day we visited, a Korean thriller was on offer.
From here walk toward the imposing and elegant Shilla Hotel, built in the 1970s, and you’ll find Jangchung Stadium. Although it no longer hosts major international events, the stadium is still remembered for several significant sporting events long before the 1988 Seoul Olympics, when Korea was just getting on to the sporting map.
It was here where the nation cheered every time Kim Il, a professional wrestler in the 1960s, pounded his opponents to the floor.
This is also where the first Korean professional boxing world champion, Kim Ki-soo, was crowned in 1966.