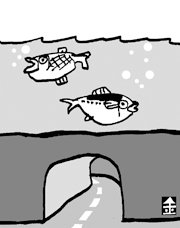 The long undersea tunnel that connects Japan’s Honshu mainland and the island of Hokkaido is called the Seikan Tunnel.
It is the longest rail tunnel in the world, being 53.85 kilometers (33.5 miles) long. Originally, transportation between Honshu and Hokkaido was only by ferry boat. During a strong storm in September 1954, five Seikan ferry boats sank, with a loss of more than 1,400 lives. It was the world’s third-largest marine accident, except during wartime. Taking this accident as an opportunity, the government proposed a safe traffic route. Construction on the Seikan Tunnel began in 1961. It opened in 1988.
Continuing this spirit, Japan also took part in the undersea tunnel construction connecting the Strait of Dover between England and France. That undersea tunnel is 50.5 kilometers long. Construction started in 1988 and the tunnel opened in 1994. This tunnel connects London and Paris in just two hours.
The concept of undersea tunnels in Japan goes back to the 1940s. The Japanese first thought of an idea to connect Iki Island off western Kyushu and Busan in Korea, which was then its colony. Back then, the Japanese had a plan to build a 10,000 kilometer-long railway linking Busan to Dandong, Beijing, Guilin, Hanoi, Saigon (now Ho Chi Minh City), Bangkok and Singapore. But the plan went down the drain when Japan lost the World War II.
On Feb. 15, a meeting of an all-party coalition of lawmakers sponsoring an undersea tunnel between Korea and Japan took place in the Diet. The list of the members is impressive, including a former Defense Agency director and an opposition party chief secretary. Their explanation is that “there are no technical difficulties.” If this proposed tunnel ― which would be 230 kilometers, of which 128 kilometers would be underwater― is built, Tokyo and London could be connected by railway. Japan actually dug about 470 meters of driftway in the mid-1980s to conduct a geological survey.
Upon hearing news of the lawmaker coalition for an undersea tunnel, the Strait of Dover comes to mind. The Channel Tunnel took 182 years from its conception before France and the United Kingdom agreed to build it. Lord Palmerston, British prime minister in 1858, commented: “Even now we think that France and Britain are close enough, but do you want us to take part in making them even closer?” The concern was that the other country may have other purposes. Although times have changed, what is more important than technology is trust between the two sides.