Put the past behind

Put the past behind 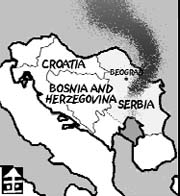 The Medieval Ages ended with the collapse of the Byzantine Empire. In 1453, Constantinople fell to the Ottoman Turks. The Serbian misfortunes started earlier, signaled by their decisive defeat to the Turks in the 1389 Battle of Kosovo. A coalition of Christian Serbs and the Islamic army of the Ottoman Turks fought against each other on a vast battle field. The fighting was so brutal that the rulers of both sides were killed. Serbia’s Princess Olivera Despina (1372-1444) fell to misfortune in this incident. Serbian historians say that at the age of 18 she was forced to marry the new sultan, who succeeded his father, Murad I, who killed her father, Prince Lazar of Serbia. Serbians maintain the new sultan took her to a harem and made her his toy. When she was 30, she faced yet another humiliation. She was caught by Timur, who invaded the Turks. Serbian nationalists claim Timur summoned her whenever there was a feast and forced her to pour wine in the nude. All Serbians to this day are saddened to hear the tragic story of the Serbian princess.
In fact, what actually happened is quite different. Princess Olivera Despina’s arranged marriage was Serbia’s strategy for survival. Shortly after the Battle of Kosovo, Hungary invaded Serbia, so Serbia reached out to the Turks, its enemy until only shortly before. Most of all, the sultan of the Turks loved the Serbian princess dearly. The argument that Timur harassed the princess is in doubt, too. The sad story of the princess is a tale that has been passed down by Serbians from generation to generation. Historical records in the Islamic world testify to the contrary. There are records that Timur treated the prisoners of war, the sultan and the princess, very well and that Timur became very sad when the sultan died. Princess Olivera Despina lived a long life and died at 72. There are many suspect parts in the Serbian version of the story.
On Sunday, Kosovo declared independence from Serbia. The Balkan Peninsula is unstable again and such dreadful words as ethnic cleansing and reckless raids come to mind. For hundreds of years since the Battle of Kosovo, there has been a power vacuum in the region. During this period, Muslims in neighboring Albania flocked to Kosovo. Now, more than 90 percent of the population is Muslim. However, Serbia is unlikely to acknowledge Kosovo’s independence easily because it is a sacred place for Serbians. Hatred gives rise to more hatred. A Serbian saying notes that the truth lies in a hard walnut shell. It might be very difficult, but Serbia must give up its distorted nationalism. Then it can see the truth inside the shell. Finally, peace will arrive.