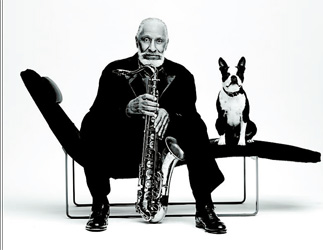 Legendary American jazz tenor saxophonist Sonny Rollins will perform at the LG Arts Center in Seoul on May 23. [JoongAng Ilbo]

There are living legends in all realms of cultural art. In jazz, along with pianists Dave Brubeck and Hank Jones, we find American tenor saxophonist Sonny Rollins. He is an icon of bebop and hard bop, each a kind of mainstream jazz.
Rollins is coming for a performance on May 23 at the LG Arts Center in Yeoksam-dong, southern Seoul. It will be the first time he takes the stage in Korea.
For his upcoming show, Rollins, 78, plans to show all there is to jazz in somewhat of a compilation of jazz genres.
“I wish to stage different styles of music within the boundary of the jazz genre,” said Rollins during an exclusive phone interview with the JoongAng Ilbo.
To Rollins, jazz is the last puzzle piece that completes the mosaic of life.
“Jazz music is an impromptu expression of the spirit, subconsciousness and spiritual sensitivity,” said Rollins.
The celebrated musician was a driving force behind the golden age of jazz that spanned from the late ’40s to the early ’60s.
In the early 1950s, he was a member of the Miles Davis Band.
Rollins’ “Saxophone Colossus,” an album recorded in 1956, is a landmark work, cited among great examples of the genre.
Working with giants of the jazz world like trumpeter Miles Davis, pianist Bud Powell, trombonist J.J. Johnson and saxophonists Charlie Parker and John Coltrane was a huge opportunity for Rollins to learn high-quality music, he said.
“I was the youngest of the group,” he said. “Other musicians had performed for much longer. They taught me not to lose the first love toward jazz.”
But there is little to worry about when it comes to Rollins’ passion for his music. Even after all these years, Rollins still plays his saxophone every day.
“It would be a shame if I weren’t able to play the music residing in my heart due to old age,” Rollins said.
In 2001, Rollins’ “This is What I Do” won the Grammy for best jazz album and in 2006, his concert album “Without a Song” won the Grammy for best jazz solo.
Rollins says “Sonny, Please” (2006) is also worth a listen. The album contains an intimate history of his wife, who passed away in 2004. The name of the work stems from his wife’s habit of saying, “Sonny, please!” when she was mad at him.
“One day, I was brainstorming for a song title when my wife called, ‘Sonny, please!’” He decided on the title immediately, and his wife agreed.
Rollins notes “St. Thomas” as his most widely loved piece.
He points to “Remembering Tommy” as a piece that deserves respect. The song was played in remembrance of pianist Tommy Flanagan, a fellow musician who passed away in 2001.
Flanagan is not the only one whom Rollins has commemorated. 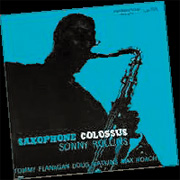 He consoled grieving families after Sept. 11, 2001, holding a concert three days after the terrorist attack took place.
Rollins was just few blocks away from the World Trade Center when the attack in New York happened. He was in shock, and initially thought he would have to cancel the prearranged concert. He couldn’t imagine himself performing while the country was in mourning.
But his wife persuaded him to go on with the show. She told him that he should console heartbroken families with his music.
“At the concert, the audience became friends and brothers. It was really moving,” Rollins recalled.
But unlike the past, Rollins says there is less emotion portrayed in modern music. One reason for the shortage, he believes, is the side-effect of technological development.
“Technological advancement is a great challenge to musicians like me,” he said. But the challenge isn’t a burden, he added.
“I love a challenge,” Rollins said. “Besides, despite social changes, jazz holds a strong and eternal message.”
At his age, Rollins says that he is healthy, and there is no reason for him to retire just yet.
“Music is my life,” Rollins said. He recalled a time when he met a yoga teacher in India who told him, “You are destined to play music all throughout life. You meditate through music.”
“As long as I can play the saxophone, I will keep on playing,” Rollins said.