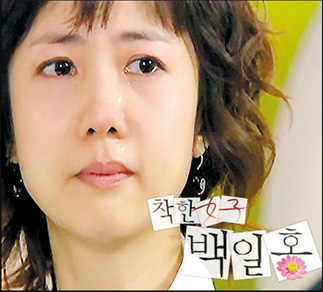 “A Good-hearted Woman, Baek Il-hong,” is one of the popular TV dramas that is a morning treat for housewives ― as well as younger audiences. [KBS-TV]

The life of an English newspaper reporter is far from fancy.
Wait, let me correct myself. Everyone’s life, in reality, is far from fancy.
From a pouting bus driver to an overworked cleaner in my neighborhood, life often seems to be a roaring monster with pointed fangs.
I guess it would not be so different for the president-elect or for Bill Gates, after all, because they are only human, too.
Me? Well, I am of course no exception. I get obsessed with saving money to face the unkind nature of life in a world ruled by money. A taxi in the morning is a luxury for me.
Still, these days, my life has not been what it used to be. I am splurging on taxis almost every day, despite my lack of cash.
I blame it all on the TV drama, “A Good-hearted Woman, Baek Il-hong” on KBS-TV. Airing at 9 a.m. from Mondays to Saturdays, this half-hour TV drama transfixes me before I take a bullet taxi to work. Talk about a guilty pleasure.
My mother does not get my recent craze. In Korea, the audience for a morning TV drama usually comprises housewives. After packing off her husband and children to work and school, 9 a.m. brings a much-needed break for the average ajumma, or middle-aged women.
Fatigued by their busy morning routine, these women want fantasy, not grim reality.
This is the typical plot: a girl (or ajumma) falls in love with a (usually younger) man born with a silver spoon in his mouth. In 99 out of 100 cases, these dramas feature evil characters who torture the good guys. But in the end, evil is punished and good prevails.
A Good-hearted Woman is no exception to this cliche. There is Baek Il-hong, who manages a small furniture company and raises three children as a single mother. She has tasted all the bitterness in life.
One day, however, a ray of hope sheds a light on her life: A rich, young bachelor, Cha Seung-pyo, falls in love with her. She tries everything to thwart his love, though, because she is not used to such luck.
However, Cha woos her persistently and finally wins her heart.
But this budding love leads to another set of problems, as the bachelor’s family members ― the evil characters ― do everything to get in the couple’s way.
I admit that this is a juvenile plot that the world has already seen too much of. The truth is nobody expects to see an Emmy-worthy plot in the morning dramas aired on all three mainstream TV networks.
These programs serve to hypnotize the viewer and distract her from reality. We don’t need great lines or philosophical characters.
After all, I am not the only one who’s a big fan of the morning drama. My boyfriend’s best friend also counts himself a faithful viewer.
“That girl is completely evil,” he said, pointing at a character during one episode. Well, maybe he and I should indulge in some ajumma-kind of fun next time we meet.
That’s life, after all, making time (or spending money) to enjoy the things that we like. If I have the morning TV dramas to hypnotize me, life is not so bad, I guess.
Life is too short and I am not a great enough a person to change the world. All I can do for now is tune in to my favorite morning drama and take a bullet taxi to work.