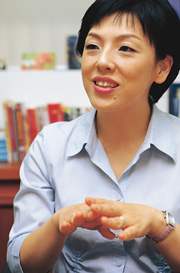 In Korea, where the ability to read English can be a huge advantage, E Bo-young is a living legend among students of English. She has never lived abroad, but speaks perfect English. She often gets asked by native speakers, “Where in the United States did you live?”
No wonder she chose to teach English, as she understands best why and how English is such a difficult language for Koreans to learn.
E is the author of best-selling English study aids. Hagwon, or private academies, that carry her name are crowded with students. Commenting on the stir caused by the presidential transition team’s plan to strengthen English public education, this star English teacher, 42, stressed that for her, public education was the key to get to where she is today.
Coaxed to share her secrets of learning English, E said there was no easy path. But trying to use the English that she learned at school in her everyday life was key, she said.
“My teachers at school gave students opportunities to actually speak the language, by staging English dramas based on the contents of textbooks.” At home, she watched the American Forces Network on TV and listened to English radio broadcasts. She wrote fan letters in English to her favorite American stars. But there was another important element ― support from her mother. “I was lucky to have a mother who was keenly interested in exposing me to English-friendly environments,” she said.
Her mother is Kim Kyung-o, the first female pilot in the country. She tried to make English part of her daughter’s daily life, giving her dolls English names and greeting her in the morning in English. E, however, is well aware that not everyone is lucky enough to have a mother like that. But that should not discourage learners of English, she stressed.
She advises them: “Never let English threaten you. Don’t make it a formidable enemy; make it your friend.” “I’d like to define fluency in English as a second language not by native-like pronunciation,” she said. “It’s the ability to express your thoughts fearlessly [in English] without long pauses or stammering.”
She was lucky to have been well taught by her teachers and her mother, but E also worked to develop her own talents. She had no secret formula, E said, with her trademark modesty. “I always think that I am a student. Whenever I work with native speakers, I always ask them to correct me and teach me if there is any wrong usage of words or idioms.”
Do Koreans all have to be able to communicate in English, although they don’t use it at work or at home?
“I was against that kind of obsession in the past, but I have changed my mind,” E said. “Times have changed, and a vast majority of information is circulated in English. The basic frame of English communication skills means economizing time and money.
“But Koreans should never sacrifice Korean for the sake of English. Only when you are good at speaking the mother tongue can you be a master in speaking a second language.”
E expressed concern to see some students and parents who make learning English their highest priority, while ignoring learning Korean.
She said the controversial proposal to teach English in English must be approached with caution. “This is actually a long-time argument in the English education circles,” she said. “It is ideal to create an environment where students can learn a second language like their mother tongue. However, what should be important is the methodology.”
She said that the core problem is the capacity of teachers, as they have to be ready to explain everything in English. “A very high level of English skill is required to be able to teach difficult subjects with ease,” she said.
E said a problem with the current private English education market is that teachers there are making parents think they can see immediate progress, which is not possible in her view. To her, getting to learn English as a second language in childhood is like getting to know a person who will be your friend for the rest of your life.
She thinks that hagwon are wrong in spoiling this “friendship” with too much commercialism. “Because of their sales strategy, parents pressure students to show progress in a short time, and students naturally lose interest in the language. As a result, instead of becoming a friend to students, English turns into an adversary. This is wrong.”
She added, “I am heartily doubtful how effective it will be for an 11-year-old to study for the Toefl [which is designed for adults].”
She stressed that private instruction should be only complementary to public education.
On the other hand, she is not happy with public education as it is either, although she believes in the power of public education.
“Teaching English should be like taking orders at a family restaurant,” she said. “Teachers should kneel down to eye level with students and kindly ask them what they want. It is truly important to make students feel that English is something that they can actually do and learn.” She continued, “When I first learned English at school, I had about four English classes a week. This has not changed much, I’ve heard. This is a huge problem. Public education should give as many chances as possible for students to get exposure to English.”