Draft dodgers have no appetite for fight

Draft dodgers have no appetite for fight 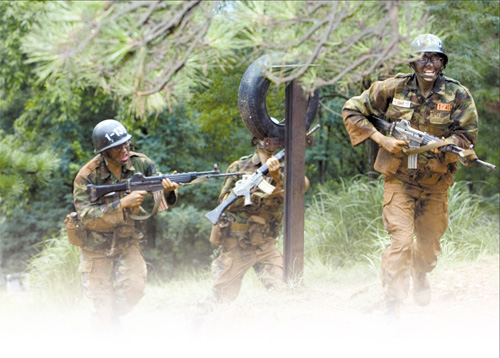 Draftees in a military drill at the Korea Army Training Center in Nonsan in South Chungcheong. [JoongAng Ilbo]


The length of compulsory military service in South Korea has been reduced since its introduction after the Korean War in 1953 and conditions in the army have improved.
But every year draft dodgers make the news with their increasingly elaborate schemes.
Just last week, in a move to encourage draftees, the defense committee of the National Assembly approved a bill that would give men who have completed their military service extra credit when taking exams to enter the civil service.
In 1999, following opposition on grounds of gender discrimination, the practice was declared unconstitutional and ended.
What’s more, most Korean companies that employed a similar policy by giving honorably discharged men a higher starting salary have phased out these measures in the past decade.
“We hope that the move will ease some of the concerns that people have when they have to complete their service,” says Major Kim Jin-tae of the Defense Ministry.
But despite such carrots, draft dodging continues. Earlier this month, 109 professional football players were indicted for deliberately injuring themselves to avoid the draft.
In November, in a case involving a former employee of the South Korean consulate in Los Angeles, the Manpower Military Administration charged 17 men with forging documents and claiming to be students enrolled at American universities.
Chun Jae-chun, an official at the administration, says the case is still in court. “Since it was the first time draft dodgers have used this sort of method, the investigation is trying its best to prevent copycat cases,” says the official, adding that the most recent draft-dodging case was a wake-up call.
These are not isolated cases. Professional athletes have tried in the past to get out of military service.
In 2004, 40 professional baseball players were prosecuted for doctoring their urine samples to convince doctors they had kidney disease. Athletes are often afraid that while away their spots on the team will be filled by other players or that their skills might get rusty. Celebrities here also have a checkered past when it comes to answering the call of duty, fearing a prolonged absence from the public would end their careers.
Last December, the popular singer Park Jae-sang, known as “Psy,” was sent back to boot camp after a court ruled that he skipped work to perform at concerts while he was supposed to be serving alternative military service. 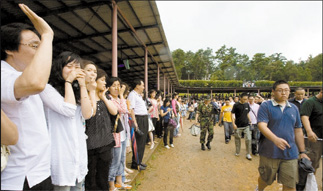 Parents and family members send off draftees at the Korea Army Training Center in Nonsan, the main Army boot camp.

Psy was exposed after the prosecution initiated a probe for the first time into 1,800 companies which the Manpower Military Administration had designated as providers of alternative service to qualified people such as certified engineers.
The singer was one of 127 people booked as a result of this investigation.
Three well-known actors, including Song Seung-heon, who commands a big following in neighboring Japan, have carefully resumed their careers recently after concluding their military duties in December 2006. Prosecutors found they had swindled their way out of the service by using similar methods to those employed by the professional baseball players.
Korea currently divides its manpower pool into five levels, depending on physical fitness. Those falling between the first and third level are slated for active duty, while the rest serve an alternative form or are exempted.
Currently, military service is 24 months for the Army with slightly different terms for the other armed branches. The Air Force requires 27 months while the Navy enforces a 26-month commitment.
Those falling short of the physical or mental fitness requirements can work at a district office or a government organization. The service term here is 26 to 36 months depending on the type of work.
Replacing military service with alternative service is generally considered a privilege. You get to sleep in the comfort of your home, military drills are rare and there is no curfew.
South Korea’s military has tried in recent years to raise the conditions of military life for the common soldier by providing better living facilities and trying to impose stricter rules against hazing. But the pace of reform has been slow.
Today’s young people who are eligible for military service don’t look forward to a spartan military experience. They have far less immediate memories of the Korean War that their grandparents and they live in a prosperous economy.
With relations between North and South Korea appear to be entering a period of detente, it is not that hard to find people who question the purpose of military service altogether. 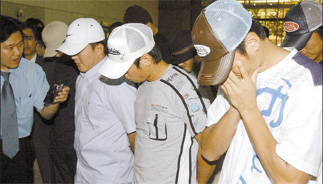 “We are not at war with anyone. Who are we fighting?” says Kim Ki-deok, 20, who is planning to go on a leave of absence at Kyungwon College and is readying himself to enter the military next year. “I am going, but it’s nonsense if you ask me.”
What irks many young Koreans today, in addition to a perceived lack of the Cold War rationale for conscription, is being denied a place in the job market right after college or high school.
To put salaries into perspective, a sergeant in the army earns less than 100,000 won ($106) per month.
Apart from those trying to skip the draft, there are also conscientious objectors, such as Jehovah’s Witnesses, whose religious beliefs forbid them to take up arms. More than 4,000 have refused military service in the past five years, including 571 last year, according to the manpower administration.
They typically serve an 18-month to three-year jail sentence for refusing service.
Last year, upon the recommendations of the National Human Rights Commission, the Defense Ministry decided to give conscientious draft objectors a way out, saying that it would introduce a series of revisions to the National Assembly for approval.
If approved, the changes could take effect next year, but the public debate surrounding the issue is expected to be tense.

Draftees gear up for a simulated chemical attack. [JoongAng Ilbo]

South Korean athletes have only one way out. Olympic gold, silver or bronze medalists and gold medalists at the Asian Games are exempted.
But a rule that exempted football players who reach the quarterfinals of the World Cup or baseball players who make the semifinals of the World Baseball Classic was scrapped last December. The law was employed only once: The national football team that played at the 2002 World Cup and the national baseball team at the 2006 World Baseball Classic were the only beneficiaries.
Choi Jae-seong, an aide to lawmaker Im Jong-in, who has worked hard to reduce the scope of exemptions, argues that exemption measures send out the wrong message and only serve to encourage more draft dodgers.
“Granting draft exemptions only enhances the perception that military service is something to avoid,” Choi says. “Everybody has to serve in some form. Getting out of the service should not be a prize.”
Not an exemption but still a preferred method is to play for the South Korean Armed Forces Athletics Corps (Sangmu). But only 400 spots are available in 23 sports disciplines.
The past indicates that if young people are provided an opportunity to skip their military duty, they take it. In 2005, a new law was enacted requiring holders of dual citizenship to fulfill their mandatory military service before being allowed to give up their Korean citizenship. Altogether, 1,800 people renounced their citizenship in the weeks before the law came into effect.

Public sentiment over the issue can easily end a career here. Political analysts say former Grand National Party head Lee Hoi-chang failed to win his bid for the presidency in 2002 partly because of draft-dodging allegations surrounding one of his sons.
Yoo Seung-jun, once a popular singer, has been barred from the country except for a funeral after he acquired U.S. citizenship in 2002. His renunciation of Korean citizenship freed him of military service a year after he publicly vowed to do his duty.
Those who manage to avoid military service are collectively called “sons of God.” Even with a planned six-month reduction of service by 2014, bringing the length of service to an all-time low, it’s not hard to find potential draft dodgers among the young men of Korea.