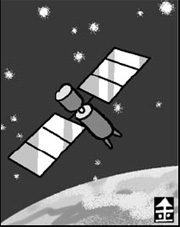 On Jan. 11, last year, China launched a missile to destroy its weather satellite, the Fengyun-1C which was orbiting at an altitude of 863 kilometers above the country. The satellite was launched into space in 1999 and had been continuing to orbit despite having gone out of service. After the destruction of the satellite, China officially became a state that possesses ballistic missile technology, after the United States and Russia.
The problem is the debris from the destroyed satellite has now become space litter. The trash orbits the Earth at a speed of 5 to 7 kilometers per second, so it is not much different from bullets or bombs.
Let’s look at what happened with the Solar Max, a sun-gazing satellite which was launched in 1980 and lost communications only months later. In 1984, a space shuttle investigated the reason; it turned out that a table-sized instrument on the satellite had about 150 holes. Tiny space litter were stuck in the board like bullets. In 1995, a French satellite collided with space debris, breaking its six-meter boom.
On March 14, 2001, the orbit of the International Space Station, built by 15 countries including the United States, had to be changed because an astronaut from the U.S. space shuttle Discovery dropped a tool while working outside the station. NASA judged that the 15-centimeter-long, 7-kilogram tool could collide with a spacecraft.
Space litter has been increasing as human-launched spacecrafts and satellites from the past decades leave behind or drop empty fuel tanks, tools, pieces of metal and debris. NASA monitors 3,100 satellites launched by 47 countries, along with 9,300 chunks of space trash of larger than 5 centimeters in diameter. Among the debris, 2,600 pieces are known to be bits of a Chinese satellite that was destroyed last year.
There are hundreds of thousands of pieces of space debris that are 1 centimeter in diameter, but it is impossible to find or monitor them. Even a piece of debris of this size is capable of breaking a satellite.
Thus, the Kessler syndrome is now drawing attention. This is a scenario in which space debris collides with satellites or each other, increasing the debris to such an enormous amount that it covers the entire Earth orbit. In that case, it would be impossible to launch spacecraft or a satellite.
Nonetheless, The Associated Press reported on Feb. 13 that the U.S. Department of Defense plans to shoot down a broken spy satellite this week. The stated reason was that if the satellite is left alone, it will fall to Earth next month and toxic substances in the fuel could cause human casualties.