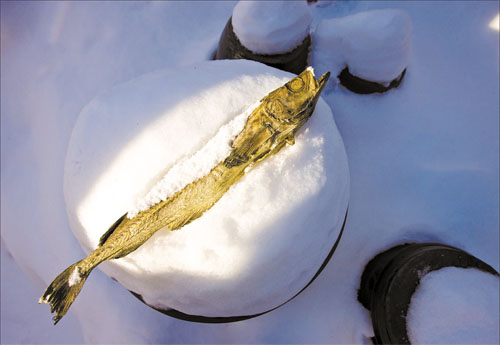 
Myeongtae, or Alaskan pollack, was once so abundant that dogs rarely gave it a second glance.
But years of overfishing, and perhaps changes in the temperature of the seas around the Korean Peninsula, have slashed stocks.
Fishermen are turning to other marine products to make a living and the Alaskan pollack we see in restaurants today in Korea is often imported.
Men downing steaming bowls of bukeotguk, soup with dried myeongtae, the morning after a night of heavy drinking is a common sight in Korea, as is eating young pollack dipped in hot chili paste when guzzling beer.
In the past, the nets of fishermen trawling the eastern shores of Korea brimmed with myeongtae. You could see the fish drying next to the icicles outside houses in rural areas during winter.
But today, all that’s changed.
“Myeongtae? There are no fishing boats here that catch myeongtae,” said Kim Geum-cheol, 50, the captain of the 3.5-ton fishing boat Haegwangho.
“That fish is on the brink of extinction,” he added. “Today we count [myeongtae] in kilos [instead of tons].”
Kim wasn’t surprised that people thought myeongtae stocks were relatively healthy.
“During the Chun Doo Hwan administration in the 1980s, myeongtae was everywhere,” recalled Kim, drinking coffee on the boat.
“Life was okay until the middle of the Roh Tae-woo administration, but when Kim Young-sam took over, a reduction in myeongtae stocks became visible,” Kim went on.
“From 1996, there were not enough [myeongtae] to catch with a fishing net, and we only caught a few using fishing lines. In 2000, during the Kim Dae-jung administration, it was hard to catch myeongtae even with the fishing lines. Just four or five years ago, there were none to catch,” Kim said.
In 1986, 20,046 tons of myeongtae were caught in Goseong County, South Gyeongsang. This figured dropped by 75 percent in 1990 to 5,109 tons. In 2000, the figure slid to 931 tons, and last year the catch weighed less than a ton.
“The government and academics say myeongtae is disappearing because of the rising water temperature,” said Kim. “But we fishermen don’t believe it. Nothing is left because of the massive nets that the huge trawlers cast overboard. Those nets suck up everything from the ocean bed.”
By the time the government banned catching immature fish in the 1980s, it was too late. The fisherman said it is unlikely that myeongtae will travel down south because Chinese vessels catch fish in such massive volume in North Korean waters.
Hwang Kang-seok, a researcher at the National Fisheries Research and Development Institute, agrees with the fisherman.
“The rising ocean temperature may be one cause, but more serious is the massive catches that took place in the past,” said Hwang. “Fish are sensitive to changing water temperatures, but the rate at which the temperature is rising is not enough to eradicate stocks in the East Sea,” Hwang added.
“In the long run, the rising temperature may force local fish to migrate north, but low stocks in the East Sea are more likely due to reckless overfishing,” said Hwang.
Hwang admits temperature rises could have a long-term impact. The average water temperature at Dongmyeong port in Seokcho, Gangwon at 10 a.m. Feb. 1, 1986 was 5 degrees Celsius (41 F), according to the National Fisheries Research and Development Institute.
At the same time and spot in 2003, the average temperature was 6.5 degrees Celsius. In less than two decades, the temperature rose by 1.5 degrees Celsius, or 0.088 degree on average every year.
This is six times higher than the annual average, which was 0.014 degree Celcius during the same period.
Experts say a rise of 1 degree Celcius in the ocean is similar to a rise of 10 degrees Celcius on land. 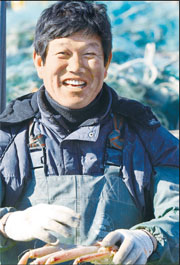 Kim Geum-cheol fishes for crab off the eastern coast in winter instead of myeongtae, or Alaskan pollack, now that stocks are declining. By Kwon Hyuk-jae

This means that the East Sea is too warm for myeongtae.
Hwang said other fish like chamjogi, or yellow corvina, face extinction. Chamjogi are used in jesa ceremonies that honor the dead, and make expensive gifts.
“There used to be lots of chamjogi in the past, but not after so much overfishing,” Hwang said.
To avoid overfishing, Hwang said a study of local fish stocks is needed to determine which fish need to be protected.
“The current system of simply releasing immature fish when caught is not enough,” Hwang added. “This is not a problem limited to just our generation. These fish are resources that should be handed down to our descendants. It is too late for myeongtae, though."
Pollution is another factor accounting for declining fish stocks. Fishermen often find boots, plastic bags and other debris on their nets.
“We very rarely catch myeongtae,” said Kang. “When we do, they are dragged up by fishing nets originally intended to catch cod or other fish,” the fisherman went on.
But catching myeongtae, even by accident, brings in cash. One Alaskan pollack sells for 7,000 ($7.40) won to 8,000 won.
Even poor-quality myeongtae fetches high prices. Last year, 20 myeongtae caught in the East Sea were sold for 300,000 won. But most myeongtae end up on the dinner table of the local fishermen rather than at the market. If 100 myeongtae are caught, only one or two are sold.
On Feb. 1 there were no myeongtae in sight at the fish auction house at Geojin port in Gangwon. The old women collecting crabs and other smaller fish from fishing nets said they hadn’t seen myeongtae in years. Even staff at restaurants in Goseong said they hadn’t served locally caught myeongtae for some time.
Kim of the fishing boat Haegwangho has been fishing since 1979. He said he got rid of his myeongtae fishing pole in 1999. Now he focuses his attention on catching flatfish in spring, sandfish in fall and crab in winter.
Kim said visitors who travel to Goseong to catch myeongtae are crazy.
Although myeongtae still pass through Goseong and get distributed to nearby Inje, which has numerous farms where the myeongtae are hung out to dry in winter, the fish are mostly imported from either Russia or the United States.
Myeongtae served in restaurants are mostly Japanese imports.
Kim reckons 99.99 percent of local myeongtae has gone. That leaves a very slim chance that the 0.001 percent will restock the waters and bring the myeongtae back to the waters off the East Coast.


Nothing gets wasted from myeongtae. Every part of the fish is used for a different culinary delight.
*The fermented meat is served as sikhae, a type of fish dish using salt and rice. The head is used to make saengtae soup or dongtae soup. Saengtae is unfrozen myeongtae, whereas dongtae is frozen myeongtae. 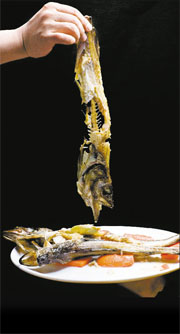 *The meat in the fish’s head is noted for its delicate flavor. The head is also used in making jeotgal, salted fish, for side-dishes.

*Myeongtae eggs are made into salted jeotgal, known as myeongranjeot. The thick red salted eggs are consumed with a bowl of hot steamed rice.

*The testicles of the male myeongtae are used as an ingredient for a soup to go with the eggs. The intestines are also used in making jeotgal known as cheongranjeot.

*The eyes are toasted and served as a side dish that goes well with traditional Korean alcoholic drinks.

*The tail, fins and bones are either fried or boiled into a soup popular for easing hangovers.

Jangwonbukeotguk
This restaurant is located in Yeouido, central Seoul. It serves bukeotguk as a postdrinking tonic and as a regular meal. Opening hours are from 6 a.m. to 3 p.m. A bowl of bukeotguk costs 4,000 won until 10 a.m. and at lunchtime the price goes up to 4,500 won. Doors close on Sundays and holidays.
Call (02) 784-0639.

Busangalmaegi
This restaurant lies deep within Bukchang-dong, behind Seoul Plaza Hotel. It’s famous for its saengtae soup, which is usually served with hot chili paste and fish intestines. One bowl costs 7,000 won. The restaurant is closed on Sundays. Call (02) 773-8146.

Hangangjip
Located near Samgakji Station, line No. 4 in Yongsan District, Hangangjip is best known for its saengtae soup. The saengtae comes from the Noryangjin fish market in Seoul. A bowl costs 11,000 won. Call (02) 796-7452.