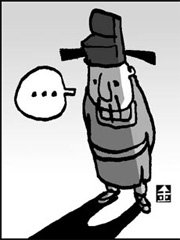 There are records in which Bao Zheng, renowned from the TV series “Judge Bao”; Song Dynasty reformist Wang Anshi; and Sima Guang, who wrote the “Comprehensive Mirror to Aid in Government,” all show up. Wang Anshi and Sima Guang were friends with a two-year age difference, and Bao Zheng was their elder by 20 years. They are all quite interesting historical characters.
On one spring day full of peony blossoms, even the usually serious Bao Zheng is elated. He breaks from the norm and asks his followers to have a drink with him. Both Wang and Sima do not enjoy drinking. Nonetheless, Sima accepts his superior’s invitation and has a drink.
Then it was Wang’s turn. But Wang refuses Bao’s offer, saying, “I can’t drink alcohol.”
The atmosphere of the meeting goes icy. Despite repeated invitations by his superior and colleagues, Wang continues to turn down the drink.
Wang’s edgy personality shows up in other stories as well. In one, Emperor Renzong makes a friendly offer that Wang doesn’t want to accept. The regent invites Wang to go fishing in the palace’s backyard and then eat the fish they catch together. His ministers hasten to bring the fishing rods from the palace. But to get out of the invite, Wang eats up all the bait on the plate, remaining unfazed at the emperor’s scolding looks.
But however grand his will may have been, Wang’s reforms failed. His new system of fixed commodity prices, his idea that cash should be paid directly for labor and many other reforms did not succeed because of his inability to earn the hearts of Bao and Emperor Renzong. His inability to accept other people turned his friend Sima, the neutral Su Shi and the reformist Han Qi all against him.
We find the same impetuousness in the president-elect as he selects his cabinet members without any prior agreement on the government reshuffle.
The opposition United Democratic Party’s politicking with laws can’t be commended. Nonetheless, the attitude of a president-elect, as the future leader of the nation, should be different.
If a leader cannot gather the people around him, his policies are susceptible to isolation. If it were a small matter, it may be permissible. However, in leading and consolidating national affairs, he should accommodate the views of his opponents.
In fact, it is not even necessary to provide the example of Wang. Rather, we have before us the five years of experience with his predecessor, who stubbornly ended reforms himself.