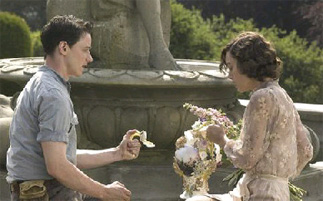 Robbie (James McAvoy) and Cecilia (Keira Knightley) realize their feelings for each other go beyond mere friendship. Provided by Working Title

The mistake was easy to make, and if you’ve ever regretted sending a love letter ― or in these less romantic times, a love text message ― you’ll empathize with the story in “Atonement.”
It’s a sultry afternoon in 1930s England. Robbie (James McAvoy), flush with lustful cravings for his childhood friend, Cecilia (Keira Knightley), types a letter explaining his feelings.
After several overly formal drafts, he discards tact and pours passion onto the page, typing the word “c***” to ram home the message.
He rereads what he’s written, laughs at his crudity and writes another letter by hand. But, dizzy with emotion, Robbie pops the wrong letter in the envelope and asks Cecilia’s 13-year-old younger sister, Briony (Saoirse Ronan), to deliver it.
Whoops.
Briony, a prickly teenager bent on becoming a writer, has a crush on Robbie and is jealous of her sister. She secretly reads the letter and becomes convinced Robbie is a sex maniac. When Briony’s 15-year-old cousin Lola is sexually assaulted later that night, Briony, her fertile imagination askew, lies to the police that the assailant was Robbie.
Ronan upstages a strong cast in this well-crafted movie, capturing the bewilderment of a young girl entering an “adult” world. The photography is stunning, McAvoy acts his pants off and the story is thought-provoking.
But sometimes a film suffers when it’s trying too hard to be intelligent. Atonement falls victim to its own cleverness, weighed down by symbolism and meaning.