‘Juno’ is sweet, but not Oscar material

‘Juno’ is sweet, but not Oscar material 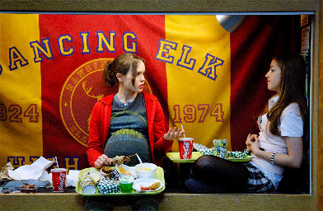 I really tried to hate “Juno.”
My friends in the States warned me about the eccentric, slang-heavy dialogue. I’ll be the first to say that this was the film’s greatest fault.
Nearly every line of the screenplay, penned by Diablo Cody, a stripper-turned blogger-turned script writer, included some sort of ridiculously quirky quip. The result was unsettlingly unnatural dialogue that even the most pretentious hipster, let alone average Midwestern folk, would never utter. I mean, when was the last time you heard someone exclaim, “Phuket, Thailand!” in disbelief?
Yeah, never.
In fact, the film as a whole seemed to inject weirdness just for the sake of being weird. Other recent youth favorites, “Napoleon Dynamite,” “Garden State” and anything by Wes Anderson, also suffered from the same reliance on obscure imagery.
Then there’s Juno’s indie soundtrack; like others in its “hip youth” genre, it seemed to feature unknown songs solely by virtue of their unpopularity. At least the tunes sound nice.
The point is, in Juno, it’s cool to be uncool, almost to the point of alienating your average Joe.
The protagonist, Juno MacGuff (Ellen Page) is the type of girl you wouldn’t take home to mother. In fact, she’s the type of girl who’d call your mother “a hobbit.” Then there’s the fact that she’s a pregnant teenager, the conceit around which the film revolves. But even so, little moon-faced Page and this little movie may manage to steal your heart.
Page does so not by delivering her lines, but through her nonverbal expressions. It’s those brown doe eyes that melt the audience, the outcast teenager’s look of anguish; this is how Page reaches her audience, not by comparing Chinese adoptees to T-shirts shot out of a cannon.
This is how most of the characters in Juno endear themselves to the audience. I would even say Juno as a silent film would have far more impact.
Dialogue is absent from the two most touching moments of the film. The first is when Juno, who opts for adoption, lets adoptive mother Vanessa (Jennifer Garner) feel the fetus kick. While Garner’s exaggerated expressions, even in earlier parts of the film, usually grate on my nerves, she works the screen in this moment. Although Juno’s the one whose belly is growing, Vanessa’s the character who’s most dynamic.
Later, when Juno finally gives birth, the unadulterated combination of sheer exhilaration and exhaustion buoys the audience’s spirits. Accompanied by her stepmom (butt-kicking Allison Janney) and ecstatic gal pal (Olivia Thirlby), Juno manages to elicit pure empathy from viewers.
When they just shut up for a minute, all of the main characters in Juno give great performances. The exceptions to this rule are Garner and Michael Cera. The latter plays Paulie Bleeker, Juno’s best friend and impregnator. The two are the only characters who get natural lines.
So now the big buzz is whether this movie really deserves the four Academy Awards for which it’s been nominated. I would argue no.
I’ll admit I shed a few tears in Juno. In the end, it was truly touching and sweet. Its pros definitely outweigh its cons.
But when the DVD comes out, I’m going to watch it on mute, and I bet I’ll like it more. You shouldn’t be able to say that about an Oscar winner.