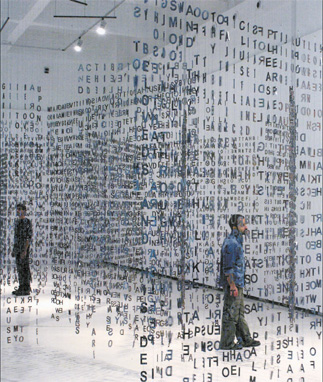 MADRID ― You wouldn’t think a major art exhibition was taking place here. The lazy sunlight dances on the top of Feria de Madrid where the art was on display and the people of the Spanish capital were shaking off their afternoon siesta.
But a close look revealed lines of hungry collectors waiting at the entrance to the opening of 27th Madrid International Contemporary Art Fair, or Arco, last week.
“Let the games begin!” said Ines Carriedo, a guide at this year’s fair.
This year in particular Arco couldn’t escape feelings of uncertainty generated by the sinking global economy and concerns hovering over a possible U.S. recession, yet sales this year are comparable with last year, which saw a 15 percent rise in sales on Arco 06.
Even with its relatively short history, Arco is a force to be reckoned with in the already overabundant art fair market.
“It’s safe to say Arco is comfortably the third or fourth most important art fair,” said Lourdes Fernandez, Arco director.
Arco presents a middle-ground between strong emerging art fairs such as Art Basel Miami and Frieze in London, and leading traditional fairs including Art Cologne and Art Basel.

Fernandez said Arco’s strength was its approach to “internationalization.” She said internationalization, collectors and content are the three main focuses of the fair.
Arco has been emphasising internationalization and looking to emerging art markets over the past few years.
Although most booths at Arco were galleries from traditional houses strong in art including Germany, Switzerland, the U.K. and the U.S., more Asian and Latin American artists are appearing.
Brazil was the special guest country this year and hosted with 32 galleries.
The Asian presence in Arco is growing steadily with Korea as one of its leaders. In fact, it chose Korea last year as its guest country with the work of 15 Korean artist on show. No other Asian country has ever received so much attention at the exhibition.
The focus was more acute because President Roh Moo-hyun attended the Arco 2007 ceremonies and Korean and European journalists wrote about Korea’s involvement.
Shin Jeong-ha, the disgraced former Dongguk University art professor who forged her academic credentials to gain prominence in the art world in Korea, was part of the Korean delegation at Arco. 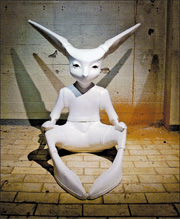 “Although [the Shin incident] was a national embarrassment, it doesn’t seem to have influenced the European collectors’ perception of the Korean galleries represented at Arco or Korean art in general,” said Lee Eun-mi, director of Hakgojae, which had a booth on the fair’s first floor.
“I think it was more of a local news story,” Fernandez said.
The reception for Korean galleries this year like Kukje Gallery, Arario Gallery, Hakgojae Gallery, Artside Gallery and Cais Art was very positive. Korea had the most galleries in Arco’s general program among Asian countries.
“Our sales this year are quite satisfactory,” said Lee Young-joo, curator for Arario Gallery who was present at Arco. “We think that European buyers have responded well to the edgy styles of our gallery’s featured artists and the way we merge the concepts of East and the West in a cutting-edge way.”
Lee Sabine, curator of Kukje Gallery, said collectors are becoming less concerned with nationality when it comes to art. Kukje Gallery showed works by Rhee Gi-bong, Andy Warhol and Louise Bourgeois.
“Korean artists seem to be at a comfortable position in Europe at the moment, along with Japanese art. Although the Chinese art boom is quite trendy, I think it’s been exaggerated,” Lee added.
Recently Chinese art has been criticized for its high prices and for being overly trendy. Work by Chinese artist Jin Shan, in which orange balls are thrown at an old-style police booth, is a play on authority.
“Chinese art has evolved enough to embrace many different esthetics and ideas. It’s such a cliche to say that it is direct or too political,” said Meg Maggio, director of Pekin Fine Arts. 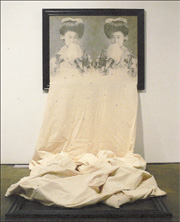 “There still are people who expect to see something ‘Mao’ and something red every time they come across Chinese art,” said James Brodie, manager of China Blue Gallery. “It’s a huge understatement and kind of insulting.”
Even with its focus on differenciating itself from other art fairs by emphasising internationalization, Arco still held tradition close. It presented blue chip galleries and artists such as Andy Warhol, Willem de Kooning, Gordon Matta-Clark and Alex Katz. The Marlborough Gallery boasted its usual high-end collection, including the Francis Bacon “Man at Washbin.” Then there were the Latin American and Spanish Galleries, including Espacio Minimo Gallery with a shocking piece by Enrique Marty that depicted four naked and bruised human figures, one hanging from the ceiling.
Pilar Beltran’s “Ciclo ― De la Series Madres e Hijos,” in which the artist marks out the cycle of life, with interrelated photographs of the fetus and tombs, was on display at the Camen Gallery of Spain.
Before the opening, a number of Spanish galleries protested that local galleries were underrepresented this year.
“It’s not about the numbers, but about quality,” said Pepe Cobo, director of Pepe Cobo Gallery and a member of the Arco organizing committee responsible for gallery selection.
“We received a record number of gallery applications this year and the competition is getting stiffer,” Cobo said.
Even with less representation this year, the 67 Spanish galleries generated proportionally higher sales than the others. Mid-level market collectors from Spain were familiar with their home market, which encouraged them to spend.
India is the guest country next year and the fair intends to “keep its level of quality” instead of striving for an instant bang, according to Fernandez.
Brazil artistry goes beyond Pele and beach life 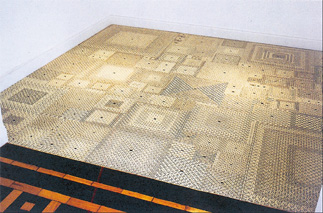 Brazil was the special guest country at this year’s Arco, with 32 galleries taking in the limelight.
The Latin American art market is in fact growing in stature. There was the Pinta art fair in Manhattan last November and major New York auction houses held sessions last May and November devoted to Latin American art.
Lourdes Fernandez, Arco director, said “a strong commercial structure is just as important as the quality of art” and added that Brazil has both these qualities.
“We wanted to concentrate on our relationship with the Latin American art scene. Spain and Latin America are very similar ― we share similar languages and have close cultural bonds,” she added.
Veteran Brazilian galleries, including Brito Cimino and Thomas Cohn, revealed the high quality of work in Brazilian art, presenting works by old masters as well as contemporary talent.
Mariana Manhaes’ installation “Mechanical Robot,” a collection of random noises and movements, proved that contemporary art can be humorous and poetic, without being too abstract.
Hilal Sami Hilal’s intricate patterns made of copper stopped visitors in their tracks and highlighted the craftsmanship of the work in the Brazilian galleries.
A pun on structure and geometry by Jose Patricio, in which beige and black dominos were laid out on the first floor of the fair, looked like a cross between pop art and Russian constructivism.
Artists were chosen before galleries.
“Brazilian art and the most important galleries tend to concentrate in Sao Paulo, so we decided to choose artists rather than the galleries to represent the broad scope of the nation’s art scene,” said Paulo Sergio Duarte.
Duarte was one of two curators responsible for the Brazilian selection at this year’s Arco.
Brazilian art is also getting a helping hand from where it matters.
“The Brazilian government is in full support of the art scene at the moment,” said Moacir dos Anjos, the other chief curator working alongside Duarte.
“Museums are being renovated and artists from diverse backgrounds are being supported through institutions and government agencies,” he added.
As for Brazil as a viable art market, Duarte said these are exciting times for Brazil.
“More and more younger collectors are appearing in the market. This new breed of collectors will provide a fresher, critical eye to the Latin American art scene.”